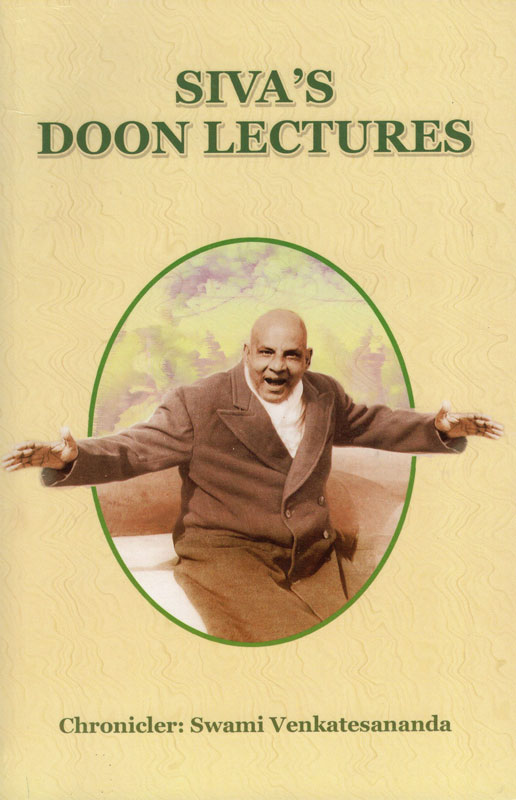 In this book, you can experience
Gurudev Swami Sivananda just as he was:
his love, his wisdom, his generosity, his sayings ‘yes’
to everything, his fun, his concern and care for
everything and everybody, and his constant call for—
BE GOOOD and DO GOOD and for God Realisation.
In it, you will also find the essence
of all the three hundred books Gurudev has written.
This book is a real gift!

After his epoch-making All-India-Ceylon Tour in 1950, Sri Swami Sivanandaji Maharaj, in three distinct waves, swept the people of Dehra Dun. Soon after the Tour, he was at Dehra Dun for a medical check-up. Even this period (which was expressly meant for rest and recoupment) was utilised by the self-sacrificing sage for dissemination of spiritual knowledge.

In 1954, a surprise visit to Dehra Dun was arranged by Sri Swami Paramananda, during which an intense spiritual awakening was brought about. During the winter of 1955-56, Holy Master used to go out of the Ashram on Sunday evenings, for a ride and walk in the open and the jungle paths alongside the Rishikesh-Dehra Dun road. Even this involved and eventually culminated in another campaign for spiritual awakening. The crowning event was the thrilling lecture at the Military College, Dehra Dun. With devout love, Sri Swami Venkatesananda had chronicled these visits and soul-stirring messages of the Master and the same was published in 1959 as ‘Doon Lectures’.

This unique book gives the readers a blessed opportunity to meet Gurudev Swami Sivananda just as he was – the undisputed Master, the companion, the friend, the child! For all, he was and still is Swami GIVANANDA! Moreover, it contains the essence of the 300 books Swami Sivanandaji Maharaj has written! Therefore, with great joy, we are bringing out the revised edition of this book as ‘Siva’s Doon Lectures’.

We are immensely grateful to the chronicler Sri Swami Venkatesananda for bringing out the first edition in 1959 and telling us about those wonderful days in Dehra Dun.

With respect and love, we put it in your hands.

Section One
ESSENTIALS OF DIVINE LIFE

Dr. Roy and Swami Satchidanandaji had decided to take Siva to Dehra Dun for a general check-up of Siva’s health. They had met Dr. Shukla, the Civil Surgeon, who was delighted at the suggestion. “And”, says Dr. Roy, “Shukla has reserved two suits in the Private Ward for Swamiji, The rooms have also been specially furnished for Swamiji. He has sent us with a message that Swamiji should come over to the Hospital as early as he can.”

“I shall start tomorrow itself”, said Siva last night. And without further waste of time Dr. Roy and Swami Satchidananda left this morning for Dehra Dun to get a taxi for Siva.

The taxi arrived at 2 P.M. Siva had left the office after the usual work—and while he was at work, there was no thought about the Dehra Dun trip nor about his absence for about two weeks from the headquarters. Just after he had taken his meal, Siva was told that the car had come from Dehra Dun.

“I am also ready” said Siva and was in the car in ten minutes.

As he came out of his Kutir, Siva bowed with folded palms to Mother Ganges and sang the Ganesh, Guru and Maha Mantra Kirtans.

Siva personally supervised the luggage to be taken to Dehra Dun and ensured that the party travelling with him was well provided for.

We reached Dehra Dun at about 5 P.M. We were received by Dr. Roy who introduced Siva to the staff of the Hospital.

Dr. Shukla said: “It is a great blessing, Swamiji, that you grace this Hospital with your visit. You have granted us the rare privilege of serving you, Sir, and we are grateful to you for that.”

In the morning Siva wanted to have a stroll on the Town Hall grounds opposite the Hospital. He called Dr. Roy and asked him: “I am now a patient in the Hospital, am I not? I believe I have to take the doctor’s permission if I am to leave the Hospital even for a walk?”

“It is generally the rule in Hospitals, Swamiji. But such formalities need not be observed by you, Swamiji, because there is nothing seriously the matter with Swamiji’s health. And the doctors also would not like to treat Swamiji as they treat ordinary patients and expect Swamiji to conform to these minor regulations.”

“No, no. The moment I got myself admitted in the Hospital, I am a patient, and I must also conform to the Hospital rules” said Siva and went straight to the doctor-in-charge and asked for permission.

The doctor was literally taken aback. Then he understood that Siva was doing so only to set an example to all patients and in order to indicate his own life principle that a leader, and especially a spiritual leader, should teach by example.