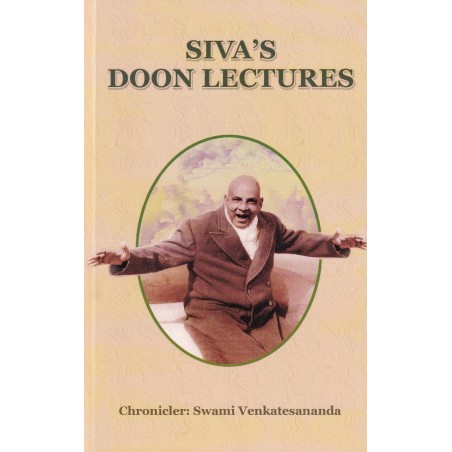 In this book, you can experience Gurudev Swami Sivananda just as he was: his love, his wisdom, his generosity, his sayings ‘yes’ to everything, his fun, his concern and care for everything and everybody, and his constant call for—BE GOOOD and DO GOOD and for God Realisation. In it, you will also find the essence of all the three hundred books Gurudev has written. This book is a real gift!

After his epoch-making All-India-Ceylon Tour in 1950, Sri Swami Sivanandaji Maharaj, in three distinct waves, swept the people of Dehra Dun. Soon after the Tour, he was at Dehra Dun for a medical check-up. Even this period (which was expressly meant for rest and recoupment) was utilised by the self-sacrificing sage for dissemination of spiritual knowledge.

In 1954, a surprise visit to Dehra Dun was arranged by Sri Swami Paramananda, during which an intense spiritual awakening was brought about. During the winter of 1955-56, Holy Master used to go out of the Ashram on Sunday evenings, for a ride and walk in the open and the jungle paths alongside the Rishikesh-Dehra Dun road. Even this involved and eventually culminated in another campaign for spiritual awakening. The crowning event was the thrilling lecture at the Military College, Dehra Dun. With devout love, Sri Swami Venkatesananda had chronicled these visits and soul-stirring messages of the Master and the same was published in 1959 as ‘Doon Lectures’.

This unique book gives the readers a blessed opportunity to meet Gurudev Swami Sivananda just as he was - the undisputed Master, the companion, the friend, the child! For all, he was and still is Swami GIVANANDA! Moreover, it contains the essence of the 300 books Swami Sivanandaji Maharaj has written! Therefore, with great joy, we are bringing out the revised edition of this book as ‘Siva’s Doon Lectures’.

We are immensely grateful to the chronicler Sri Swami Venkatesananda for bringing out the first edition in 1959 and telling us about those wonderful days in Dehra Dun.

With respect and love, we put it in your hands.