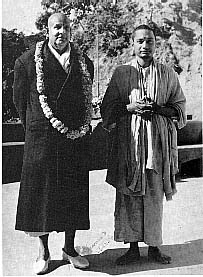 Swami Venkatesananda with beloved Gurudev on his right.

Parthasarathy (as Swami Venkatesananda was called before he entered the holy order of Sannyasa) was born to the pious and noble parents, Sri Srinivasan and Srimati Lakshmi Devi, in a village called Koil Venni in Tanjore District, South India, on 29th December 1921. Many incidents happened in his childhood and boyhood which reveal his inborn divine qualities. The boy’s mind began to turn to devotion and love towards Lord Venkatesa of the famous shrine of Holy Tirupati. When Parthasarathy was a boy of twelve years, he came across books written by Swami Sivananda who was destined to become his spiritual Master and Living God. In course of time Parthasarathy held a responsible position at Delhi as a personal assistant to highly influential Secretary to the Government of India. But the call of the spirit was irresistible. His contact with Swami Sivananda through books had developed into contact through frequent letters. Then it flowed into regular visits to the holy Ananda Kutir, whenever Parthasarathy managed to get leave from his office duties. The personal contact with the Master soon overwhelmed Parthasarathy and he cut off all bonds that bound him to the secular life, renounced a promising career and offered himself as a dedicated Sevak (servant) at the lotus-feet of his Divine Master Swami Sivananda.

Coming thus into the spiritual fold of Swami Sivananda at a very young age, Parthasarathy took to the renunciate in the year 1945 when he resigned the excellent position he was holding. He came with the specific intention of placing himself entirely at the service of Gurudev’s Universal Spiritual Mission, with intense devotion, utter dedication and unparalleled spirit of service. He soon made himself indispensable to worshipful Gurudev, especially, in his global spiritual dissemination work. From early 1945 up to the time when he breathed his last, his entire life was whole-souled absorption in the sublime good work of Gurudev Sivananda. Parthasarathy was ordained as a monk on 8th of September, 1947, the sacred Diamond Jubilee of Sri Gurudev. He became Swami Venkatesananda.

The Swami was a versatile personality. He placed his great talent in the service of the holy Master. He was one of the pillars of the Divine Life spiritual movement. At a certain period he was the very right hand of worshipful Gurudev. Such was the great confidence reposed on him by worshipful Gurudev, that every morning, when Gurudev stepped out of his little cottage on the banks of the holy Ganga, he would first go directly to Swami Venkatesananda’s room situated right in front and sitting there, he would many a time consult him and seek his opinion on matters concerning Jnana Yagna (dissemination of spiritual knowledge) and publishing activities of the Society and at times on other important matters as well.

He was a tower of strength to Sri Gurudev during the latter’s unique “ALL INDIA SPIRITUAL AWAKENING TOUR OF 1950” which had electrified the entire nation and powerfully stirred up the spiritual consciousness of millions of people creating a wave of religious awakening and inspiration throughout the country. Gurudev declared about Swami Venkatesananda: “He is the Crest-Jewel of my Mission. He is the resplendence of my work. Will I see anyone else shine brighter than him! Surely none have I seen so far. He is a tower of strength to me and my Mission.” During the tour he took down notes of every word spoken by Sri Gurudev at each centre and has brought a voluminous work “Sivananda’s Lectures: All India Tour.”

He came especially to work vigorously in the correspondence section of the Ashram. One can say that volumes of typewritten material connected with correspondence is to be turned out, even during night hours by this Swami. The entire career of his in the Ashram was devoted to writing, recording of Gurudev’s speeches and editing the day-to-day messages and conversations of Gurudev which he did to the point of perfection and perhaps most of the Sivananda: Day-to-Day that we have these days recorded are the works of Swami Venkatesananda, principally. After tireless service and winklessly working in the Ashram for Sri Gurudev’s glory, his main mission was to bring glory around the aura of Gurudev’s Centre, The Divine Life Society, which task he fulfilled very commendably. He has produce a superb work entitled “Gurudev Sivananda” which is not merely a detailed biography of Swami Sivananda but also an authentic record of the history of the Divine Life Society, – a reference book involving great labour.

The Indian devotees in South Africe, headed by Swami Sahajanandaji Maharaj, required a powerful spirit of the Divine Life Society to enthuse them and Swami Venkatesananda was the man chosen by Sri Gurudev for the fulfilment of this Mission there. Thus in 1961 Swami Venkatesananda was deputed to South Africa, where he did a marvellous work. Reports came from there Swami Venkatesananda shook the whole of South Africa and he hoisted the banner of Sri Gurudev’s Mission. After working there for some years, he moved to other countries – Mauritius, Madagascar, and some countries in Europe, – and later on to the East, particularly to Australia. Most of his later days were spent in South Africa only, where again he did vigorous literary work, writing and compiling excellent text books on philosophy, Yoga and scriptures. He produced more than 50 books covering a wide range of subjects pertaining to philosophy, religion, metaphysics, ethics, self-development, spiritual Sadhana (spiritual practice), the different Yoga paths, Gurudev’special teachings, comparative religion, psychology and the different scriptures like the Ramayana, Srimad Bhagavata Purana, Yoga Vasishtha, the Gita, the Devi Mahatmya, etc., the very latest volume being a compilation of the teachings of Lord Buddha, entitled “Buddha Daily Readings.” No other single disciple of worshipful Gurudev has made such an admirable, substantial contribution on such a scale to the great Master’s world-wide spiritual ministry of the present-day mankind. The crowning glory of his contribution was the spade-work he prepared of the “Complete Work of Swami Sivananda” in 18 volumes, of which 6 volumes have been printed under the auspices of the Birth Centenary Celebration by the Divine Life Society, Freemantle Branch of Australia.

A scholar without ostentation, a writer without pedantry and a speaker without idiosyncrasies, Swami Venkatesananda has made himself lovable and valuable to all. As an exponent of Yoga, as an Organizer of Bhajan (singing of the Lord’s Name) Group, as an inaugurator and promoter of a Society Branch, as an editor and prolific writer of many books, as a versatile genius, he always carried distinction in serving the cause of the Society in many countries of the world.

The great saintly soul passed away on the 2nd of December, 1982 at the Sivanada School of Yoga, Johannesburg, South Africa. In the special services offered at the Rishikesh Ashram, Swami Chidananda paid the following tribute to him: “I offer my homage to the sacred memory of our departed brother Revered and Worshipful Sri Swami Venkatesanandaji Maharaj whom his own pre-monastic, earthly, physical mother used to regard as younger brother of Chidananda–like Rama and Lakshmana. He was unparalleled and versatile genius, Chronicler-Editor. I pay my reverential homage and my most loving prostrations and adorations to one who had become in many ways an integral part of this Ashram, a part of our very lives and, as such, he is within the hearts of all those who have been closely moving with him, and in the hearts of all of us enshrined as an inseparable part of our inner being. He had the rare capacity of endearing himself to everyone, to children, to his equals, to the venerable old and to everyone. He is the universal being. He was in harmony with all. The part that he had played in Jnana Yajna work or the dissemination of spiritual knowledge by teaching and preaching the spiritual culture of India, the knowledge of Vedanta and the science of Yoga to the people all over the world, is something unequalled. He was a tower of strength to Gurudev and one of the greatest contributors in his World Awakening Mission, both from the Ashram and later throughout the world after Gurudev’s physical passing.”

Search for articles and books by Swami Venkatesananda on this website: