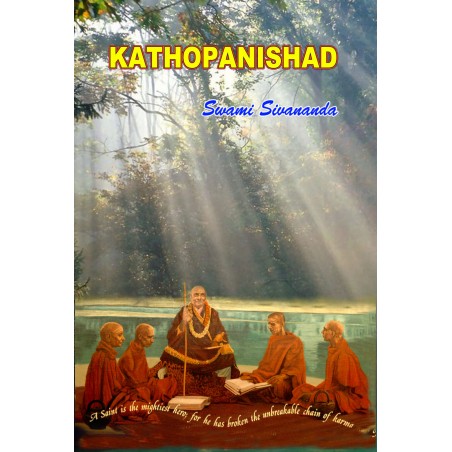 The greatness and the sublimity of the Upanishads are well known to all the students of philosophy. There have been attempts to approach the books through various standpoints. Much has been written over the knotty problems of interpretation, by the Eastern and Western scholars. And yet the lay reader has not understood the central teachings fully well. Gurudev Sri Swami Sivanandaji Maharaj, in his comprehensive volume The Principal Upanishads has given exhaustive commentary on Nine Upanishads and stressed such points clearly and truly, explaining the abstruse ideas in his own inimitable style, thus laying bare the sacred doctrine not only before the eligible pupil but also the lay reader. For the convenience of the readers, we are bringing out each Upanishad in a separate book. The present volume contains the text, translation, notes and commentary on Kathopanishad.

Other Books in This Series:

The Kathopanishad is divided into six Vallis. Valli literally means a creeper. A Valli, like a creeper, is attached to the Sakhas or Branches of the Veda. Valli is used in the same sense as Parvam, joint, shoot, branch, i.e., a division. This Upanishad is also divided into two Adhyayas (chapters) of three Vallis each.

This is one of the most beautiful Upanishads in which the eternal truths are given in the form of a narrative. The narrative is taken from Taittiriya Brahmana (3-11-8) with some variation. The same story is told in the Taittiriya Brahmana, only with this difference, that in the Brahmana, freedom from death and birth is obtained by a peculiar performance of a sacrifice, while in the Upanishad, it is obtained by knowledge only.

This Upanishad has become very popular not only in India but everywhere in the world. It has been translated into many languages. It is a branch or recension of the Krishna Yajurveda. It forms part of the Katha-Sakha Brahmana of the Krishna Yajurveda. A few verses from this Upanishad occur in the Bhagavad Gita. It deserves the most careful consideration of all who are interested in the growth of religious and philosophical ideas. The sublime doctrines of Vedanta are presented in this Upanishad in a very attractive and charming manner.

The Katha Upanishad has always been considered as one of the best Upanishads. It has won the appreciation of many English, French and German writers also. They regard this Upanishad as the best book on philosophy and poetry of ancient Hindus. In elevation of thought, depth of expression, beauty of its imagery, no Upanishad is equal to the Kathopanishad.

This Upanishad was first introduced to the knowledge of European scholars by Raja Ram Mohan Roy. It has been translated into the German by Windischmann, by Poley. Dr. Weber has also written a commentary. Swami Ananda Giri has written a gloss on the commentary of Sri Sankara. Muir, Rignaud, Gough and many others have translated this Upanishad.

May the truths of the Upanishads be revealed unto you all! May you all be endowed with right understanding, discrimination and pure subtle intellect! May you all be freed from the knots of ignorance and ties of Samsara, and the trammels of birth and death! May you all be blessed with a Srotriya Brahma-Nishtha Guru to lead you on in the spiritual path! May you all shine as Jivanmuktas or Brahma-Jnanis in this very birth!