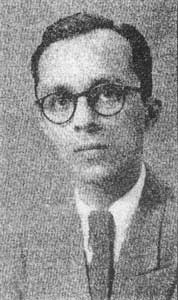 We announce with deep regret the sad news of the passing away of our most revered Sri N. Ananthanarayananji. He was going through indisposed health for the last few years and he breathed his last on the morning of the 22nd of this March (2006) in the hospital at Erode.

He was born at Kodaikanal, Tamil Nadu, in 1927. After obtaining a triple first class in B.Sc. in 1946, he had a 3-year stint in a bank. Thereupon, he further studied for two years to obtain an M.A. degree before he secured a post in the Planning Commission, the Government of India, at Delhi.

Having a strong religious and spiritual bent of mind from his early life, his conviction in higher values of life was further strengthened by being exposed to the literature of Swami Vivekananda, Mahatma Gandhi, Swami Rama Tirtha, etc. In mid-forties, he happened to acquire for the first time Gurudev Swami Sivanandaji Maharajs well-known book “Sure Ways for Success in Life and God-realisation” which opened up unlimited avenues for him to Gurudevs vast spiritual literature.

In mid-fifties, he visited the Sivananda Ashram Headquarters three times and had the Darshan of Gurudev, who overwhelmed him with a generous gift of Jnana Yajna Prasad each time. Initially, as a mark of participation in Gurudevs Jnana Yajna, he got a booklet of Gurudev “Pearls on the Shore of Wisdom” printed in Delhi in 1957 in commemoration of Gurudevs 71st Birthday and followed it up by sending a sizeable donation towards the printing of the Pictorial Volume “Bhumandaleshwar Swami Sivananda”, also for the same occasion. In 1960, he left his Government service and joined the Ashram. Suitably cut out for the job, he seriously engaged himself in right earnest in editing some of Gurudevs books systematically such as “The Mind, Its Mysteries and Control“, “The Practice of Brahmacharya“, etc. In 1962, he managed the Y.V.F.A. Press at Sivanandashram for one year and, besides, had helped in the editing of the monthly magazines “Health and Long Life” and “The Wisdom Light” for a short period before they were finally amalgamated with “The Divine Life.”

He compiled Gurudevs magnum opus “Bliss Divine” and wrote the best selling biography of Gurudev “From Man to God-Man” and earned the accolades of a vast readership of Gurudevs literature. He had also had to his credit three books authored by him, one of which reads in a way like an autobiographical account. He has also written the booklet “Positive Aids to Peace of Mind” which is very popular and has brought about peace for many.

As a literary luminary, he prominently carved a niche for himself in the firmament of Gurudevs Jnana Yajna Mission and earned His grace and blessings in abundance.

May his departed soul attain the lotus-feet of Gurudev and rest in the Peace of the Eternal. Hari Om Tat Sat.