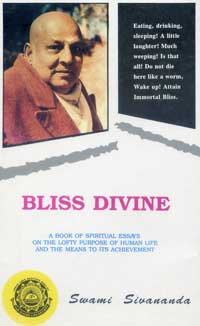 This is the age of scepticism and materialism. Wealth tempts people like a deceptive mirage. It hardens the heart of man and causes pride in him and makes him forget God.

Materialistic civilisation has made man insincere and untruthful. Rudderless, the ship of human civilisation is heading fast towards the rock of self-aggrandisement, hatred, aimless living, and eventually, self-destruction.

The present world is full of fear, suspicion, crimes, conflicts, quarrels and struggles. The philosophy of flesh substitutes licence for discipline and self-indulgence for self-sacrifice. The real ideal of religion is forgotten, the spirit of religion is lost, and only a poor external structure remains.

Scientists have conquered the air and the atom. Sputniks circle around the world. But alas! Men have not realised the mysteries of the Atman, their inner Self. They have conquered nature, and outer space, but they have not conquered their arch enemy, mind.

Mere intelligence, without morality and spirituality, is not helpful. It is dangerous. It will lead to disaster.

Today, in the world convulsed by wars and revolutions, there is a great necessity to revive the moral and spiritual value of ancient Indian culture and its everlasting idealism. If the human mind is to be weaned from materialism, if humanity is to be brought together, the only way is the practice of Yoga and Vedanta.

Yoga and Vedanta are basically the same. Vedanta is the sublime philosophy that gives a directive to the Yoga way of life.

Unconscious movement is called natural evolution. Conscious evolution is Yoga or the practice of religion.

Religion is not a matter of belonging to a church or of professing a creed. It is a matter of evolving a deeper insight and understanding and expressing it through life.

It is this insight and this understanding which the great Master Sivananda seeks to impart in the pages of BLISS DIVINE.

BLISS DIVINE is an immortal work, a legacy for ages to come. It is a spiritual classic. It is a Bible for the Christians, a Bhagavad-Gita for the Hindus, a Koran for the Muslims, a Zend-Avesta for the Parsis. It sums up the teachings of all scriptures of all ages.

Not only that; it offers comfort and consolation, enlightenment and elucidation, in a manner which makes a direct appeal to the modern mind. No line is vague. No explanation is hidden.

Optimism is the keynote of the book. Its pages abound in constructive suggestions for a fuller, happier life, right now, here on earth.

Each essay is self-contained and can be read apart from the rest of the book. The author has prefaced the book with a beautiful introduction, unsurpassed for depth of meaning and lucidity of presentation.

A Word About "BLISS DIVINE"

This valuable and excellent anthology of a sage’s Wisdom Teachings is in the nature of a devout disciple’s votive offering at the feet of his spiritual preceptor or Guru. This book comprises an act of Guruseva and dedication. By this work the compiler, my Guru-Bandhu SRI ANANTHANARAYANAN, fulfilled an ardent wish of the holy Master SWAMI SIVANANDAJI MAHARAJ for such a collection and as such he has given concrete form to a pure Sankalpa of a saint who sought to serve mankind by helping it see light in the midst of darkness and guide it along the Path of Goodness. Unable to fulfil Gurudev’s desire during His lifetime due to His sudden and unexpected demise, Sri Ananthanarayanan laboured hard night and day to posthumously offer this work at the altar of his Master’s sacred and hallowed memory. This embodies an earnest and unsparing labour of Love.

The worthy compiler’s association with Swami Sivanandaji was over a period of more than a decade. Sri Ananthanarayanan was an officer in the Planning Commission in the Central Government at Delhi when he first visited Rishikesh to meet the Sage of Ananda Kutir. He was enthused by Gurudev’s idea of Jnana Yajna and inspired by His personality of indubitable spiritual eminence. He was charmed by the saint’s spontaneous and motiveless love. Back at Delhi, he set to work and brought out a beautiful little collection of Gurudev’s teachings under the caption "Pearls on the Shore of Wisdom". Perhaps this first booklet actually anticipated and proved a precursor to this present "BLISS DIVINE". Eminently qualified for this work more than anyone else, due to his high academic attainment, Ananthanarayanan has been happily endowed by providence with keen intelligence and literary ability. Hence the high quality of this present volume which is being acclaimed by numerous readers as the best publication so far brought out by the Divine Life Society. Born at Kodaikanal in 1927, Ananthanarayanan grew up as an idealistic youth with a sensitive disposition appreciative of higher values in life. It was natural, therefore, that he found scant satisfaction in his secular college education even when he secured a triple First-class in the B.Sc. examination in 1946 at the young age of 19. Going on to pass a higher degree examination, he took a Master of Arts degree in Economics, but felt that the entire period of his education was "wasted" since he saw no substantial benefit therefrom in the shape of inner spiritual evolution or uplift of his higher being.

This discontent made him turn to spiritual literature and he avidly absorbed the wise and lofty teachings of Swami Vivekananda, Mahatma Gandhi, Swami Rama Tirtha and other luminaries of recent times. Inevitably he soon came into contact with Swami Sivananda’s spiritual teachings which were at that time flooding this land like the very waters of Life to the seeking souls everywhere. He felt now that Gurudev’s writings were showing him the path. At last the right path had been shown to him in clear and unambiguous terms in a most practical manner and inspiringly too. This drew him to Swamiji when he got appointed at Delhi and thus came near to Rishikesh. Gurudev showered gifts of books upon Ananthanarayananji and won his heart for His divine mission of Dissemination of Spiritual Knowledge. Not much later the power and the influence of His sublime teachings decided the future course of this ardent young seeker. He resolved his step and unhesitatingly threw to the winds all prospects of worldly prosperity and advancement, and renouncing his covetable post in the Central Government, turned his back to secular life and joined Swami Sivananda. Since that day he has done and is still doing yeoman service to the great Guru’s holy Mission with deep sincerity and earnestness.

Through this present volume "BLISS DIVINE" Sri Ananthanarayanan has presented to modern India a rare compendium of spiritual wisdom and brought to the educated classes a comprehensive yet choicest collection of Sivanandaji’s teachings to present-day humanity. The essence of our country’s culture and ideals is contained in this beautiful compilation of his. He has put us all into a deep debt of gratitude which we can only repay by making this "BLISS DIVINE" our life’s Guide and Companion! May God bless him and may Gurudev’s Grace be with him always!