FROM MAN TO GOD-MAN 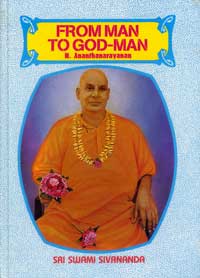 SWAMI Sivananda was unique in more ways than one, which entitles him to pride of place in modern India’s spiritual horizon. Whether in physical appearance, intellectual stature or spiritual excellence, he was second to none. But the hallmark of his life was the way he tangibly influenced innumerable individual lives in every corner of the world. This influence crossed man-made barriers of religion, race and colour, of language, country and sex, and even political system. Perhaps no saint in the twentieth century had personal contact with as many followers as Swami Sivananda had.

Gulzarilal Nanda, twice Acting-Prime Minister of India, remarked years ago: "When a history of the great religious teachers of this ancient land is compiled, the name of Swami Sivananda would appear at the top".

Having witnessed modern life at first hand as an affluent doctor in Malaya, Swami Sivananda was fully conversant with the joys and sorrows of people, and could identify himself with their problems and perplexities. This endeared him to all and made them respect his words.

In the remarkable life of this man of God, Sadhana and service were inextricably mixed up, preaching and practice were intertwined, work and worship both mingled in a harmonious whole. Not only this, but there was a common thread running through Swami Sivananda’s pre-Sannyas and post-Sannyas life—the silken thread of cosmic love and selfless service. Having attained God-realisation—the summum bonum of life—after years of hard struggle, he did not retire into seclusion to enjoy the bliss all by himself, but eagerly ran about inviting everyone to share it by taking the spiritual plunge.

Swami Sivananda blasted old superstitions about God and religion. In equal measure he exploded modern fairy tales about Yoga and Yogis. By teaching and by personal example, he made it plain that there was no easy way to Moksha or liberation, no short-cut to God. The laborious, orthodox way was the only way. It was the way of service and love, of abstraction and meditation, of dispassion and discrimination.

Swami Sivananda’s life was not an exciting one, but it was an inspiring one, a life which abounded in lessons for spiritual seekers. See him as a student in Tiruchirappalli and Tanjore, watch him as a doctor in Seremban and Johore Bahru, follow him through his wanderings in the Vindhyas, observe him in his days of austerities in Swarg Ashram, and study him in his many years of service to humanity as a spiritual teacher par excellence. It all points in the same direction. It is the way of Truth. It is the way of unremitting service and love. It is the way which takes one to God. And herein lies the utility of his books.

Swami Sivananda was indeed a strange Hindu monk. He shaved his head, but wore an English overcoat in winter. An Indian to the core, he yet wrote in English. He came from orthodox Brahmin stock, but his catholicity embraced even the untouchable in its sweep. He himself underwent the harshest austerities, but advised his disciples to care for the body. He stayed with his Guru only for a fleeting day or two, but realised God unerringly. He ran an Ashram without a budget, and trained students by the thousands without a set syllabus. He stuck to the Ganges bank like a leech for over three decades, but his name was heard and respected in every continent in his own lifetime. He displayed no miracles in public, but his devotees all over the world affirmed and reaffirmed that he had wrought miracles in their lives.

Swami Sivananda shed his mortal coil in 1963, but the popularity of his name and writings grow every day. It is a strange story—this story of Swami Sivananda. A story well worth reading—and remembering. Nay, a story to live by.

Paramahansa Yogananda, the eminent founder of the Self-realization Fellowship, and author of the well-known spiritual classic, Autobiography of a Yogi, paid a glowing tribute to the Master in the following inspiring words: "The life of the great Rishi, Swami Sivananda, serves as a perfect example of selfless activity. He blesses India and the world by his presence."