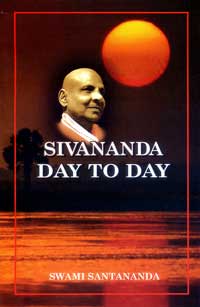 There have been many chroniclers who faithfully recorded whatever Gurudev Swami Sivanandaji Maharaj had said or spoken either in Satsangas, or while holding audiences, or while attending to the official work, or while even walking with devotees or disciples irrespective of what the venue was. Any situation was perfect for the flow of wisdom from his holy lips.

Usually, the devotees who came for his Darshan asked questions about their mundane as well as spiritual life and got satisfactory answers replete with words of wisdom. But, at times, Gurudev himself would pose a question when no questions were forthcoming and there followed an enlightening and soul-stirring talk elevating the hearts of the listeners.

Volumes have been filled with such conversations and they all go by the title “Sivananda: Day–to-Day.” Subsequently, some of them have appeared under the title “The Gospel of Swami Sivananda.”

This book is one such attempt by the late Swami Santanandaji Maharaj who happened to be in the Ashram’s administration for some time besides being in personal service of Gurudev.

It is admitted that Saint Sivananda is the channel for the Lord’s Grace to flow into the heart of man. By his sight or Sankalpa, he can confer blessings–material and spiritual–on the devotee. He has toured all over the land and delivered numerous lectures. He has written over three hundred books which guide the lives of people all over the world.

But that is not all. Sri Swamiji excels all other saints in the human element that is predominant in him. He loves to mix with all; and to show how every man in his everyday life leads the life divine. He shows us how our prosaic actions can be sublimated into Yoga.

All this he does by his own example. To spiritual aspirants, therefore, his thoughts, words and deeds are of the greatest import.

A close and devout disciple of Sri Gurudev and an earnest spiritual aspirant, Sri Swami Santananda has, in this volume, brought together the wonderful lessons that all can learn from the daily actions of Sri Gurudev. He has gathered the pearls of wisdom, inspired words of Truth, as they fell from his lips, and presented them in a charming way, that would inspire all.

IN THE IMAGE OF THE MASTER

If today Sivananda Literature has awakened the inner spirit of mankind far and wide, all over the globe, it is not because of a mere intellectual out burst, spilling out, without any originality, the collective gathering of empirical dogmas and theories from various sources, but exclusively because it is the very expression of his inner experience, of his inner personality. So to say, he has expressed himself in his literature as he himself is, in reality.

Sivananda Literature is meant not merely for the educated classes. It is like an open-air theatre, widely open to all, young and old, male and female, literate and illiterate, without the least distinction of caste, colour, creed or race.

For the young man just stepping into the field of life, not having enough strength to face its adverse conditions, Sivananda Literature is a blood tonic which nourishes his entire personality, prepares him and makes him march forward boldly to face the hard game.

To the middle-aged house-holder who is in a fix, not able to face the tribulations of family ties, perplexed as to how to walk the way in the long run of life, Sivananda Literature is a Guiding Light which illumines the royal road and takes him safely till the end of his journey.

Swamiji’s method of disseminating the ancient gospel in a most appealing manner, applicable to the modern man, is something unique of its kind.

The most beautiful aspect of it is that you need not go in search of his literature which comes to your very door to greet you, to guide you, to serve you, to comfort and console you in a miraculous way with breathless earnestness and boundless love.

Swami Sivananda serves through his literature–not the body, but the soul. Sivananda Literature is food for the soul. Swamiji sits in a remote corner of Bharatavarsha on the sacred banks of the Ganges. The Ganges flows only in India and that also in a limited area. But, Sivananda Literature, the inexhaustible wisdom of Swamiji flows in the hearts of millions enabling them to reap the rich harvest of ever-lasting peace and immortality.

Swami Sivananda’s methods of spreading spiritual knowledge among humanity at large may, sometimes, even look queer, but they are cent per cent fruitful. The moment Swamiji comes across an address, immediately he will send a parcel of his books to the person concerned. Swamiji is not particular even to know whether the person to whom the books are sent is spiritual-minded and is interested in spiritual books.

For the onlooker, this may appear to be a wasteful method, but Swamiji would say, in his calm and cool way: “Don’t worry, if the person does not like it, it will be useful to someone somewhere.”

Yes, it is quite true. Swamiji’s writings which are not mere words of poetic imagination, but sober truths of a perennial philosophy, the immortal voice of the ancient saints and seers, always reach the hands of aspirants longing after liberation, wherever they may be.

Swami Sivananda is not bothered when a person writes abruptly: “Sir, I have no interest in these spiritual books. I don’t need them any more.” The efforts of Swamiji to spread the Gospel of Divine Life, the only mission of his own life, have no selfish motive behind them. Therefore it is that his efforts have not gone in vain. They have brought forth wonderful fruits. Thousands of aspirants all over the world are daily awakened by Sivananda Literature.

It is Swami Sivananda’s “Spiritual Lessons” casually found in a second-hand bookshop which transformed the life of Dr. Chellamma, an eye-surgeon of Madras, who was engrossed in the usual pursuit of worldly life and family attachment, induced her to renounce the world and make her blossom forth into Swami Sivananda-Hridayananda, who now utilises her profession as a worship unto the Lord through her selfless service to the hundreds of poor eye-patients in the Sivananda Eye Hospital.

It is an article of Swamiji found in “My Magazine”, by chance, that inspired and elevated Sridhar, a boy belonging to a rich family of luxurious life, made him embrace Sannyasa and turned him into Swami Chidananda, now a shining glory to The Divine Life Society.

It is a single sentence in “Students’ Success” which awakened the inner spirit of Shri V.L. Nagaraj of the Postal Department in Banglore when he opened, out of curiosity, a book addressed to somebody else, from a parcel which got untied during transit. The transformation which took place in that single soul has, in its turn, brought about the transformation of hundreds of lives in Bangalore. As a result of it all, a wonderful and dynamic Divine Life Centre flourishes in Bangalore today, having a press of its own and disseminating the gospel of Divine Life through the free distribution of books and pamphlets.

Instances are brought to light every day of how, in a miraculous and astounding manner, aspirants get Swamiji’s literature and get themselves transformed. Sivananda Literature is a powerful magnet. When, for the sake of curiosity, you glance at it, you are caught up. You cannot help finishing the book to the end. You cannot help being inspired and elevated. You cannot help getting your materialistic outlook entirely changed. Such is the glory, such is the grandeur and such is the splendour of Sivananda Literature. Every word of this Divine Literature has life in it. Those words go straight into your heart, tear to pieces all your atheistic conclusions and awaken the spirit which is lying dormant behind them all.

However much the squirrel may try, by sponging its tail, will it be ever possible for it to empty the ocean?

Such is my attempt to write about Sivananda-Literature, the Ocean of Wisdom.