A TRIP TO SACRED KAILAS – MANSAROWAR 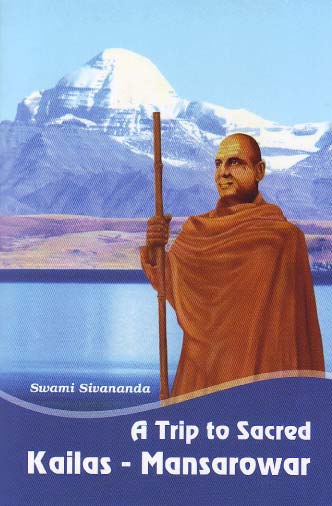 WHOSE BLOOD RUNS
IN THE VEINS
OF THE AUTHOR

We are immensely happy to offer to our readers the second edition of ‘A Trip to Sacred Kailas-Mansarowar’ by Worshipful Gurudev Sri Swami Sivanandaji Maharaj.

Sri Gurudev had undertaken a trip to this world’s most sacred mountain in June 1931 and had penned his experiences in the form of a travelogue. According to Sri Gurudev, it is not just a physical journey, but an inner journey for mind and soul as well to scale the supreme heights of Divine Peace.

This spiritual travelogue, first published in 1932, serves as a complete guidebook for Kailas-Mansarowar Yatra which not only provides detailed and picturesque description of rivers, waterfalls, ascents, descents, halting places etc. of Yatra but also highlights the spiritual significance of important places.

We do hope that reading of this unique book will make the readers experience the blessedness of undertaking a Trip to Sacred Kailas-Mansarowar.

When shall I, in a blissful mood, pass like a second the long period (Kalpa) covered by the life-time of many Brahmas, being in the presence of Lord Siva along with Sivaganas in a mansion of gold and gems situated in Mount Kailasa, and praying with bowed head and folded hands, "Save me, O Auspicious and All-pervading One, the Consort of Divine Mother, the Lord of all the worlds.

(PHILOSOPHY OF SYMBOLS OF LORD SIVA)

Lord Siva represents the destructive aspect of Brahman. That portion of Brahman that is enveloped by Tamo Guna Pradhana Maya is Lord Siva who is the all-pervading Ishwar and who also dwells in Mount Kailas. He is the Bhandara or store-house for wisdom. Siva minus Parvati or Kali or Durga is Nirguna Brahman Himself. With Maya-Parvati He becomes the Saguna Brahman for the purpose of pious devotion of His devotees. Devotees of Rama must worship Lord Siva for 3 to 6 months before they take to worship of Rama. Rama Himself worshipped Lord Siva at the famous Rameshwaram. Lord Siva is the Lord of Ascetics and Lord of Yogins, robed in space (Digambar).

The crescent moon indicates that He has controlled the mind perfectly. The flow of the Ganges represents the nectar of immortality. Elephant represents symbolically pride. His wearing the skin of the elephant denotes that he has controlled pride. Tiger represents lust. His sitting on tiger’s skin indicates that He has conquered lust. His holding a deer on one hand indicates that He has removed the Chanchalata (tossing) of the mind. Deer jumps from one place to another swiftly. His wearing of serpents denotes wisdom and eternity. Serpents live for a large number of years. He is Trilochana, the Three-eyed One, in the centre of whose forehead is the third eye, the eye of wisdom.

I bow with folded hands crores of times at the lotus-feet of that Lord Siva who is non-dual, who is the Adhishthan or support for the world and all minds, who is Sat-chit-ananda, who is the Ruler, the Antaryamin, the Sakshi (silent witness) for everything, who is self-effulgent, self-existent and self-contained (Paripoorna), who is the remover of the primitive Avidya and who is the Adi-Guru or Parama Guru or Jagat Guru.

It may well be said that there is no place in all this fair earth of ours which can compare with the marvellous beauty of these everlasting snows. Rishi Valmiki who penned the following words, with all his glowing imagery, has scarcely over-rated what all men must find beyond the power of adequate expression.

"In a hundred ages of the Gods I could not tell thee of the glories of Himachal where Siva lived and where the Ganges falls from the foot of Vishnu like the slender thread of lotus flower. I behold Mansarowar, and there in the form of a swan dwells Siva. This lake was formed from the mind of Brahma; there dwell also Mahadev and the Gods. When the earth of Mansarowar touches anyone’s body or when anyone bathes in the lake, he shall go to the paradise of Brahma, and he who drinks its waters shall go to the heaven of Siva and shall be released from the sins of a hundred births and even the beast who bears the name of Mansarowar shall go to the paradise of Brahma. Its waters are like pearls. There is no mountain like Himachal, for in it are Kailas and Mansarowar. As the dew is dried up by the morning sun, so are the sins of mankind dried up at the sight of Himachal!" (Ramayana.)

An elaborate description of Kailas and Mansarowar will be found in the Manas Khand of Skanda Purana.

Of all Yatras, Kailas Yatra is most difficult. Kailas is for the Hindus a respected place of pilgrimage of hoary antiquity. It is also called Mount Meru, "King of Mountains". It is the supposed seat of Lord Siva. It is situated in Western Tibet. From time immemorial, it is being frequented by Rishis, Munis, Sages, Sadhus and pious persons. In sacred books like Yoga Vashishta, Mahabharata, etc., mention of Kailas is very often made, in various places. Many Siddhas had lived there in olden days, as the place is extremely charming and favourable for spiritual contemplation. Even Vashishta Maharishi says "Once upon a time, I spent a long time most instructively and delightfully in Kailas hills in the worship of Parameswara, in the performance of Tapas in a raised shed on the banks of the Ganges and the study of many books in the company of Siddhas." In the mind of a Hindu, Kailas is always associated with soul-elevating, sublime, spiritual ideas. Kailas hills are a huge range with a central, beautiful, naturally carved and decorated, shining peak, eternally clad with silvery snow 22,980 feet above sea-level. Some take the height to be 22,028 feet. This particular peak is in the form of a natural huge Siva Linga (Virat form). This is worshipped as the form of Lord Siva from a distance. There is neither a temple nor a Poojari nor daily Pooja there. The picturesque and magnanimous scenery of Kailas with its awful solemnity and weird grandeur of landscape is unprecedented in the whole world. The Alpine scenery is nothing, nothing before Kailas. To many the fruition of all earthly desires is the crowning glory of a visit to the sacred places, by which the sins of former births are cleansed and exemption from metempsychosis is obtained.

Apart from their religious attributes, this part of Tibet and the adjoining block of the Himalayan range, full of snow peaks and giant mountains, are unrivalled in the whole world for sublime grandeur, for in the small area of a strip of 30 miles wide along the Kumaon border, there must be some 80 peaks above 20,000 feet and, standing out boldly above their setting, are Nanda Devi 25,850 feet, the highest mountain in the British territory throughout the world, and her sister Kamet 25,373 feet, her rival in elevation and beauty, while north of this mass of grandeur lies the table-land of Tibet of an average height of 13,000 to 15,000 feet above sea-level, and dominating all her fellows is Gurla Mandhata, a gigantic pile, the highest peak of which is 25,350 feet visible as a landmark for very many miles.

To the east of the Nanda Devi group, we have the Pancha Chuli, of "Five Peaks" range the summits varying from 19,923 feet upto 22,661 feet. We have the sacred Badrinath, Kedarnath, Gangotri mountains west of the Nanda Devi group and others, which falling within an area of 26 miles from north to south and 30 miles from east to west, present a panorama of lofty peaks whose grandeur baffles all description, for we have in this small area four peaks above 23,300 feet, nine above 22,000 feet, eleven above 21,000 feet and eight above 20,000 feet.

On the western edge of the holy country of the lakes and Mount Kailas is Tirtha Puri, a great centre for pilgrims, three days’ march from Darchin on the river Sutlej. There are hot sulphur springs here. We received some kind of white Vibhuti (white application for the forehead as a Prasad of the Deity). It resembles exactly like sago. Many took it for sago only. They are small pieces of calcium carbonate. Look at the marvels of Prakriti - Anirvachaniya Maya.

(KAILAS TRIP FROM A SPIRITUAL-VIEW POINT)

The goal of life is God-realisation which only can free us from the miseries of Samsara, the wheel of birth and death. The performance of the daily obligatory rites Nitya, Naimittika Karmas, Yatras, etc., unselfishly leads to the acquisition of virtue. This leads to the destruction of sin, which in turn results in the purification of the mind. This purification of the mind leads to the comprehension of the true nature of Samsara or relative existence, its false and worthless nature. From this results Vairagyam (renunciation) which arouses a desire for liberation, from this desire results a vigilant search for its means. From it comes the renunciation of all actions. Thence the practice of Yoga, which leads to an habitual tendency of the mind to settle in the Atma or Brahman. This results in the knowledge of the meaning of such Sruti passages as "Tat Twam Asi," which destroys the Avidya, ignorance, thus leading to the establishment in one’s own Self.

Thus you see that Yatra like Kailas trip is a Parampara Sadhana for God-realisation as it causes Chitta-Shuddi and Nidhidhyasan - Dhyana is a direct, Sakshat Sadhana. House-holders who are shut up in the world amidst various sorts of cares and anxieties find great relief in Yatra. Their minds get quite refreshed by a Yatra. Further, during the travel they come across Sadhus and Sannyasins. They can have good Satsang. They can clear their doubts. They can get various sorts of help from them in spiritual Sadhana. That is the main object of Yatra.

Let me bring to your memory, once more the last words of the Vedas, Upanishads – ‘TAT TWAM ASI’, my dear Readers!

Peace be unto all beings.