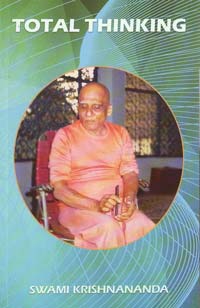 With great delight, we offer to our readers our new publication ‘Total Thinking’ which comprises a series of discourses given by Worshipful Sri Swami Krishnanandaji Maharaj during Sadhana Week in 1980. In these illuminating lectures, Pujya Swamiji Maharaj imparts valuable techniques for spiritual practices for the spiritual aspirants and seekers to illumine their journey unto the Supreme.

It is our sincere hope that the readers will find this book a treasure-trove of wisdom teachings and they will also be immensely benefited by implementing those eternal teachings in their lives.

THE ARDUOUS TASK OF SELF-ANALYSIS

We are here for this Sadhana Week especially to reinforce in our minds ideas and values which are supposed to help us in living the life that we are expected to live in this world. The world blows like a wind, as a strong cyclone caring not for what it sweeps away by cutting the very ground from under our feet. That persons and things in the world are like wisps of straw driven by the power of the winds of the world is a truth which will not always occur to our minds, as we get accustomed to be driven in this manner. A perpetual slave will not be aware that he is a slave because he is used to that kind of living. We as human beings actually live the life of puppets, but inasmuch as we are used to this way of living right from our childhood, we may mistake this utter slavery of subjection to the powers of nature for a sort of independence in our own selves. Hence, it becomes necessary that we take stock of our achievements, and of the expectations that we may hope for in our lives, by a sort of self-analysis, and also an analysis of the circumstances and conditions in which we are living. A life that we can call intelligent should be capable of an assessment which is in conformity with the truths of life as they are.

What do we see in this world, and what is the kind of experience that we are passing through every day? We do not see God here anywhere, and we also cannot see religion and spirituality. When we open our eyes, it is not religion that we are seeing. We are seeing something painful, something that takes us aback, that makes us shudder in our hearts and keeps us in a state of anxiety even about the next day itself. It is an obvious truth spoken to the hearts of everyone that our lives are not as secure as they are made to appear on the surface. No one sleeps with a confident heart regarding the conditions of tomorrow in one’s life. Man suspects man and intrigues against his own brother and, with a smile on his lips, secretly manoeuvres to cut the throat of his own neighbour. Man has turned out to be a shrewd politician and a ruthless, selfish individual. No matter how often he may frequent the church or the temple, whatever be the scriptures that he may read and the number of times he may roll the beads, he has not ceased to be what he is. He shows his true colours when the time for it comes.

Man has not succeeded in demonstrating his humanity in his outward life because inwardly he has not been a human being. Anthropologically and sociologically he has been a human being, no doubt, but not psychologically. He has been a cut-throat at the root. When a man is cornered from all sides and is not allowed any avenue of self-expression, when all channels of action and thinking are blocked from every side, he demonstrates his essential nature which, at that time, is not humanity but brutality. He chooses the beast that he is while all the while proclaiming to be a humanitarian genius, a religious devotee, a spiritual hero. It all goes to dust in one second when he is tested with the touchstone of the struggles through which the world passes, and to which he himself is subject.