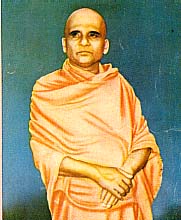 Born as the eldest son of a family of six children, on the 25th of April, 1922, he was named as Subbaraya. He was born in a highly religious and orthodox Brahmin family, well-versed in the Sanskrit language, the influence of which was very profound on the young boy. He had his High School education at Puttur (South Kanara Dist., Karnataka State) and stood first in the class in all the subjects. Not being satisfied with what was taught in the classroom, he took to earnest self-study of Sanskrit with the aid of Amara-Kosa and other scriptural texts. He studied and got by heart the entire Bhagavad Gita when he was still a boy, and he had a simple way of doing it, that of not taking his morning breakfast or even lunch unless he memorized a prescribed number of verses, every day. Thus within months he memorized the whole of the Gita and recited it, in full, everyday. Such was his eagerness to study scripture. Reading from the Srimad Bhagavata that Lord Narayana lives in the sacred Badrinath Dham, the young boy literally believed it and entertained a secret pious wish to go to the Himalayas where Badrinath is and see the Lord there.

By the study of Sanskrit works like the Gita, the Upanishads, etc, he was rooted more and more in the Advaita philosophy of Sanakaracharya, though he belonged to the traditional Madhva-sect which follows the dualistic philosophy. His inner longing for Advaitic experience and renunciation was growing strong everyday. In 1943, Subbaraya took up Government sevice at Hospet in Bellary District, which however did not last long. Before the end of the same year, he left for Varnasi and there he studied the Vedas and other scriptures. But the longing for seclusion and the unknown call from the Master pulled him to Rishikesh, where he arrived in the summer of 1944. When he met Swami Sivananda and fell prostrate before him, the saint said: "Stay here till death; I will make kings and ministers fall at your feet." The young man who wondered within himself how could this ever happen at all, now realizes the prophecy of the saint's statement. Swami Sivananda initiated this young Subbaraya into the holy order of Sannyasa on the sacred day of Makara-Sankranti, the 14th of January, 1946, and he was named as Swami Krishnananda.

Sri Gurudev found that he was suitable in his eyes to do works of correspondence, letter writing, writing messages and even doing some assistance work in compiling books, editing them, etc. Later on he was given the work of putting into type-written form the hand-written manuscripts of Sri Gurudev which he used to bring to him everyday. For instance, the entire two volumes of the Brahma Sutras of Sri Gurudev, which he wrote in his hand-writing was type-written by Swami Krishnananda. He confined himself mostly to the literary side and never used to have any kind of relation with visitors so that people who came from outside never knew he existed in the Ashram. It was in the year 1948 that Gurudev asked him to do more work, along the lines of writing books in Philosophy and religion which he took up with earnestness. It could be safely said that from that year onwards, he was more absorbed in writing and conducting classes, holding lectures, etc., as per instruction of Sri Gurudev. The first book he wrote, 'The Realisation of the Absolute' in a matter of mere 14 days, is still the best of his, at once terse, direct and stimulating.

When it became necessary for the Ashram to co-opt assistance from other members in the work of management, Swami Krishnananda was asked to collaborate with the Working Committee which was formed in the year 1957 and at that time it was that he received a position of Secretary, especially concerned with the management of finance which work he continued till about the year 1961, when , due to the absence for a protracted period of Swami Chidananda, Gurudev nominated him as General Secretary of the Divine Life Society which position he is associated with till today. It can very safely be recorded that in the history of the Divine Life Society none ever held, nor is likely to hold, that responsible and taxing position of General Secretary for more than a quarter of a Century.

It may be recorded to his credit, without the fear of the least exaggeration, that it is Swami Krishnananda, the genius and master of scriptures, who alone has expounded practically all the major scriptures of Vedanta in the Yoga-Vedanta Forest Academy of the Society, in the early morning sessions, afternoon classes and the regular three-month courses, most of which have been brought out in book-form - authentic commentaries covering the philosophy, psychology and practice of the various disciplines of Yoga. He is thus the author of nearly twenty works, each one a master-piece in itself. This, a genius of his caliber only could do, in the midst of his enormous day-to-day volume of work as the General Secretary of a vast Institution. He is a rare blend of Karma and Jnana Yogas, a living example of the Gita-teaching.

Such was his literary skill and understanding of the entire gamut of the works of Sivananda numbering about three hundred that he was made the President of the Sivananda Literature Research Institute, by Sri Gurudev himself, when the Institute was formed on 8th September, 1958. Again it was Swami Krishnananda who was appointed as the President of the Sivananda Literature Dissemination Committee, which was formed to bring out translations of Sri Gurudev's works in the major Indian languages, simultaneously. When Swami Shivapremananda was deputed to the States, Swami Krishnananda was made the Editor of the Society's official monthly organ, 'The Divine Life' from September 1961, which he did efficiently for nearly two decades.

He is a master of practically every system of Indian thought and Western philosophy. "Many Sankaras are rolled into one Krishnananda," said Sri Gurudev, in a cryptic statement, which he himself has amplified in his article 'I Marvel at Krishnanandaji'.

Swami Krishnananda Web Site--Some of Swamiji's books are available for free at this site.