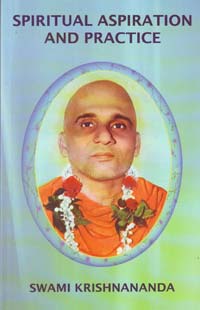 We are immensely happy to bring out the first edition of ‘Spiritual Aspiration and Practice’ by Worshipful Sri Swami Krishnanandaji Maharaj. The book is a beautiful compilation of series of discourses given during Sadhana Week in 1991 wherein Pujya Swamiji Maharaj lucidly explains what the spiritual aim actually is and what is the meaning of being a truly religious and spiritual person. These thought-provoking lectures of Pujya Swamiji Maharaj present an in-depth analysis of spiritual process and remove many a misconceptions regarding spiritual life as well.

We do hope that the book will be of invaluable help to numerous sincere souls who are seeking for a deeper meaning and a higher purpose in their lives.

We have now before us a continuous series of sessions for the coming days of special deliberations commonly known as Sadhana Week. It is so called because during these days we are supposed to devote our time especially for intense considerations along the lines of our inner focus towards the goal that we have placed before ourselves. It is also called Jnana Sathra, offering at the altar of Knowledge. What we need is an enlightenment into the manner and the method that we have to adopt in bestowing serious thought on this subject.

We are aiming at the achievement of a purpose. Every person in the world has some aim or motive, a purpose before himself or herself, without a consciousness of which no one would even lift a finger. If you see a thing, hear a thing, do a thing or move in any direction, there is a purpose behind this activity of yours, and the purpose is psychological, physical or social. Purposeless actions are unthinkable. But what is the purpose? Each person in the world will give his or her own answer. Why are you doing business? Why are you studying in schools and colleges? Why do you go to temples? Why do you do anything at all? What are you aiming at finally? Though the answer seems to be ready at hand for all people, on a careful probing into the matter you will realise in the end that every answer to this question is tentative, relative, and never final. In the end you have to say, "I cannot say what it is that I am seeking."

At the outset you will feel that, right from the early morning onwards, you are face to face with certain realities. Your life presents itself before you as a kind of confrontation, and you have to handle it in a particular manner. The moment you wake up in the morning, you are face to face with a reality. On the one hand, it is the reality of the physical universe—the sun, the moon and the stars, the mountains and rivers, and so on. On the other hand, you have the world of human beings.

Instinctively, we make an adjustment of our personality with the conditions imposed upon us by physical nature as well as the social context in which we are placed. If it is hot in summer or cold in winter, or if a powerful wind is blowing or it is raining, whatever the case may be, we adjust ourselves by various ways and means according to the prevailing natural conditions. We do this spontaneously. At the same time, we are conscious of people around us, beginning with the nearest person with whom we have to adjust ourselves in a particular manner. We cannot simply imagine that the person does not exist. A visible humanity and a conceptual humanity are both there before us, to be handled in a particular manner.

Is this the only thing that we are expected to do in this world—to make a kind of self-adjustment with natural forces and human conditions? We do that every day. Everyone does it, and that seems to be the be-all and end-all of all things. Everybody is very busy. Busy with what? Busy with these adjustments only. We have to somehow or other see that we survive, and keep both our body and soul intact in the context of this confrontation before us with physical nature as well as with human society. We are actually fighting with something with which we cannot easily accommodate ourselves. This fight may not take the form of a material or a physical presentation, but it is a conscious tension in the mind.