THE HERITAGE OF INDIAN CULTURE 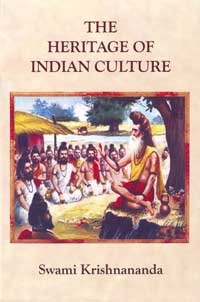 This lecture series entitled The Heritage of Indian Culture was given by Swami Krishnananda during the course of eight Sunday evening satsangs in 1980. Here Swamiji highlights the vision of India, which sees the totality of the various manifestations of life and visualises the One in the many, and how this has relevance in our lives today. Swamiji explores the meaning and development of culture and civilisation, the role that philosophy, religion and scripture have played, and why Indian culture has remained so rich and vital through the passage of time while other cultures have perished. Swamiji also discusses the individual’s role in society and integrates this with our process of evolution towards the attainment of the Ultimate Reality.

Swamiji’s masterful analysis and in-depth, all-inclusive understanding, combined with his brilliant style of expression, give us a penetrating insight into this important subject.

The Vision of India

We are here to consider some of the general features of our life which direct and decide our human relationships, and consequently, the solidarity of mankind. Human relation is the primary consideration in the organisations of the world which go by the name of ‘nations’ or ‘governments’, or even lesser bodies than these. We have come to learn through practical experience that our daily needs in life are social, and our conduct is also related to this. In academies and universities this peculiar relation among people is called ‘Humanities’, which is a deep subject that covers a vast range of studies into the psychology and sociology of human behaviour.

The behaviour of a person, or the conduct of a body of people, is generally known as their culture. Students of history and the humanities are acquainted with the great cultures of the world and with the behaviours of human minds through the passage of time, which are imposing and enlightening for students of anthropology as well. When we read about the history of the cultures of the world, we seem to be reading through a drama of human activity, such as the plays of Shakespeare or Kalidasa where human conduct and a psychological manoeuvring are portrayed in such an interesting manner that they seem to touch our hearts and, incidentally, also guide us in our day-to-day affairs. History is a great lesson for us even today. We do not study the history of mankind merely to amuse ourselves with a story of ancient times. It is an instruction to us at the present moment in regard to our own social conduct.

The knowledge we have gained from the study of ancient cultures—beginning with the Babylonian or the Assyrian, the Egyptian, the Greek, the Roman, the Chinese, the Indian, and the later offshoots of these major organisations of human behaviour—gives some insight into human nature. I would like to regard culture as the behaviour of human nature. It is the upbringing of the social unit that man is which speaks in the language of the culture of that person. We generally say that so-and-so is a cultured person. Though at that time we may not be actually defining ‘culture’ in an academic manner, we have in our mind some idea as to what culture is. We associate goodness, politeness, humility, servicefulness, and a capacity to understand and feel the circumstances and the position of other people when we conceive of the structure or character of culture. Great historians such as H. G. Wells, who has written an outline of the history of the world, and those who have made studies in this line such as Arnold Toynbee, have covered an area which may be said to constitute every minute detail of psychological conduct.

We are surprised that many of these cultures have died and even the remnants are hardly visible these days. We have to dig into the bowels of the Earth to find out if there is any remainder of those ancient cultures of antediluvian times. Cultures perish. They do not seem to survive the passage of time, the reason behind which should also become an interesting subject of our studies. Students of culture and history have very carefully come to the conclusion that when cultures cannot accommodate themselves with the requirements of the passage of time, they become moribund and die out.

The world moves through the passage of history; we may call it the passage of time. After living some years in this world, we have seen how time moves. Do we not feel the necessity in our day-to-day existence to adjust and accommodate ourselves with the requirements of time? Do we stick to our old dogma which was valid twenty years ago? It must have been a valid ideal, no doubt, but that validity has become out-dated under the circumstances that prevail today.

Thus it is that the great teacher Acharya Shankara mentions in one of his commentaries that dharma, which is the law of life, is relative to place, time and circumstance. It is not a rigid procrustean bed into which every person is tied, whatever he be and wherever he be. Hence, cultures seem to be relative adjustments and envisagements or outlooks of mankind under certain geographical and social conditions.

We gather from an interesting reading of mighty histories of the ancient past—such as the history of Greece, or a more interesting dramatic history written by Edward Gibbon under the title The History of the Decline and Fall of the Roman Empire—that these are not merely stories told to us, but are tremendous lessons of mankind’s cultures telling us why they perished.

India also had its own culture, and it has its culture even today. It has been a surprise to many students of history that how, under the vicissitudes of time and the onslaughts of inimical forces, India’s culture should still be able to show its head above the surface of the Earth, and not be buried under the debris of the ground as other cultures met their fate. A great student of India’s culture was Sri Aurobindo, and we had many other stalwarts of this type, who opined that if India is alive today in consonance with the basic requirements of its own ancient culture, it is because of the spirituality of its outlook. Here, we have to strike a very cautious note when we speak of the spiritual outlook of India—about which we may have time to think over more deeply later on—because we are likely to suddenly jump to the conclusion that spirituality means a God-seeking mentality of man, which consequently also implies, perhaps, a kind of indifference to the values of social and practical life. These are matters which require very deep consideration in our own personal, social, and political interests.

The Roman and Greek cultures were mighty, no doubt, but they no longer exist for a single reason—namely, their incapacity to accommodate themselves with the requirements of the passage of time. When the times required them to change their ideals and ideologies, they refused, and they were crushed by the iron hand of nature. Nature does not respect persons. Nature has no friends, even as nature has no enemies. Nature has a purpose; this is something very important to remember. Nature loves only its purpose and nothing else, and it also loves those people who are in a position to help in the fulfilment of its purpose. Those who adamantly cling to an ideal which was once in conformity with certain activities of nature in the interest of the fulfilment of its own purpose, but which are now not required, will be shunned.

The Vision of True Religion

The vision of life entertained in India has been called Darshana or perception of Truth, whose moods and manifestations have been adopted according to the various degrees and requisitions of people’s practical existence. Nothing in the world has been more misunderstood than religion, because whatever be the hectic effort of the human mind to consider religious values as permanent, they have somehow managed to escape the grasp of the practical evaluations of life, and remain an isolated and future achievement which has segregated the secular from the spiritual. Even in the parliament of Britain there is the Lords Spiritual and Lords Temporal, the upper house and the lower house, the upper one consisting of spiritual leaders and the lower one consisting of temporal or secular leaders. It is difficult, usually, to bring about a rapprochement between vision and life; and if India has struggled to achieve anything worth the while, it is nothing but this harmony between vision and living. Conceptual perception and inward realisation have been recognised as the essential determinants of the daily routines of life.