COMMENTARY
ON THE
BHAGAVADGITA 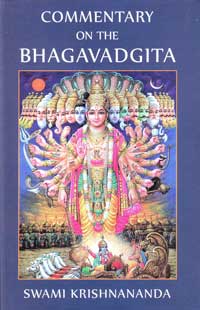 The Veda speaks of twofold Dharma—engaging in actions and renunciation of actions. He further says, prāṇināṃ sākṣād abhyudaya-niḥśreyasa-hetur yaḥ sa dharmo—this twofold Dharma is the tool which directly promotes the prosperity as well as the liberation of all living beings.

With the flux of time, this Dharma got corrupted and the Supreme Lord incarnated as Vasudev to re-establish it. The compassionate Lord taught the Dharma to Arjuna through his immortal song the Srimad Bhagavad Gita, which was later on brought out by Sage Vedavyasa in his monumental work, the Mahabharata. Sage Vedavyasa testifies to the authenticity of this sacred Gita, saying:

The Srimad Bhagavad Gita is read all over the world, and has also been translated into many languages. Signifying the supreme glory of this divine scripture, Sadgurudev Sri Swami Sivanandaji Maharaj says, "Just as the dark, unfathomed depths of the ocean contain the most precious pearls, so also the Gita contains spiritual gems of incalculable value." Worshipful Sri Swami Krishnanandaji Maharaj, the scholarly saint of our Ashram, dived deep into the ocean of this sacred scripture and culled sublime and soul-stirring spiritual truths. Sri Swamiji Maharaj most graciously shared his wisdom treasure with all through a series of talks given in 1989, and made seekers eternally indebted to him.

We are immensely happy to bring out the book Commentary on the Bhagavadgita by Pujya Sri Swami Krishnanandaji Maharaj as our worshipful offering on his 13th Punyatithi Aradhana. We hope that earnest seekers and students of philosophy will be benefited by this book.

May the blessings of Lord Krishna and Sadgurudev be ever upon all.

Glory to Lord Krishna, the World Teacher, who gave the immortal teachings of the Bhagavad Gita to Arjuna in the middle of a battlefield.

The Bhagavad Gita is a universal gospel which has been translated into many modern languages. It is a "Song Celestial" in seven hundred verses. Numerous commentaries have been written on this book, which are studied all over the world. The teachings are practical. They can be applied in all circumstances in one’s life.

Bharatavarsha is held in high esteem the world over due to the Bhagavad Gita. Mahatma Gandhi once asked the librarian in one of the biggest libraries in London: "What spiritual book do you most often issue?" The librarian replied, "The Gita."

Mahatma Gandhi himself said, "I lost my mother when I was young, but the Gita has been a mother to me. In all moments of sorrow and dejection, whenever I opened the Gita and read one or two verses here or there, it consoled me."

Worshipful Sri Swami Krishnanandaji, who was a leading disciple of His Holiness Gurudev Swami Sivanandaji, served Gurudev’s institution as General Secretary for almost forty years. Originally he gave a series of talks on the Gita in the early seventies, some of which I had the privilege of attending. Then in 1989, at the request of many devotees from both the East and West, Pujya Swamiji gave the 51 discourses included in this book.

Swami Krishnanandaji Maharaj expounded this Great Book in a very easy way that even a layman can understand. In his discourses he gave numerous interesting incidents and brief stories which created great interest among the listeners. This wonderful book throws a flood of light on the subject and illumines our path. When the path is illumined you can walk steadily towards the goal. Therefore, study these discourses regularly and make your life sublime.

It is my sincere hope that this book has a wide circulation and that a large number of people will read these discourses of Pujya Swami Krishnanandaji and derive immense benefit.

May the choicest blessings of Lord Krishna ever be upon all.

Unless otherwise specified, all the verses quoted in this book are from the Bhagavadgita.

Yoga is a process of rejoicing. It is not a suffering. It is a movement through happiness. From one state of joy, we move to another state of joy.

All the procedures of meditation are, in the end, ways of awakening the Soul-consciousness which, in its depth, is, at once, God-consciousness. What is apparently extraneous and outside one’s body gets vitally woven up into the fabric of one’s being in rightly practised meditation. In brief, meditation is the art of uniting with Reality.

Every speck of space, every atom of matter, can be regarded as a vehicle which reflects one face of God. To think God would be to drown one’s self in an indescribable completeness whereby one loses one’s presence, the individuality evaporates like mist before the blazing Sun.

When we try to understand things in terms of the Spirit, we will realise that all things assume a uniform meaning, even as the sunlight is equal to all objects.

If the gods want to help us, they do not come to protect us with a stick in their hands like a shepherd protecting sheep. Their help always comes in the form of an enhanced understanding, a blessing which they pour upon us in the form of an increased insight into the nature of things. This is because knowledge is the greatest blessing, insight is the greatest power, and there is nothing in this world equal to illumination. Objects, property, wealth, social status—none of them can stand before illumination and insight into the true nature of things, with which God blesses those who are eternally, perpetually, united with Him.

The Absolute is the only Reality. Everything is everywhere at every time.