Sri Swami Sivananda and His Mission 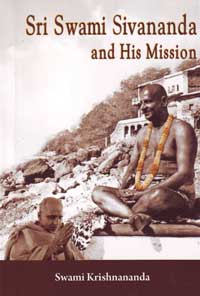 Here is a potent account that will give the heart a glimpse into the journey of a great saint and master of our times. May the blessings of Sri Swami Sivanandaji Maharaj be upon all seekers of Truth.

The Guru-disciple relationship is the most revered and intense of all relationships. During the years of concentrated study and training that a disciple undergoes under the guidance of his or her Guru, the highest Truth is imparted. Such was the relationship between Swami Krishnananda and his Guru, Sri Swami Sivanandaji Maharaj, at whose feet Swamiji spent nineteen years studying and serving.

Swami Krishnananda arrived in the Ashram in May 1944 and was loved and cared for like a dearest son by Sri Swami Sivanandaji Maharaj. Swamiji loved and worshipped Sri Gurudev as the Almighty walking on Earth in human form.

Though Swami Krishnananda gave individual talks about Sri Swami Sivanandaji Maharaj on many occasions over the years, it was during Sadhana Week in 1985 that Swamiji gave a series of discourses entitled Sri Swami Sivananda and His Mission. With Swami Krishnananda’s usual holistic approach, the world circumstances that precipitated the incarnation of Sri Gurudev are discussed, followed by details of Gurudev’s early days in Rishikesh and the founding of The Divine Life Society.

The Emergence Of A Supernormal Power

The world is frequently visited by stars coming from Heaven, shedding their light throughout the atmosphere of the Earth and giving everyone a living fill-up, as may be required under the conditions prevailing at that hour. This coming of the divine power under prescribed conditions and circumstances is called an incarnation, or the sudden rising into action of a luminary, sometimes known as a great sage or saint. The word incarnation suggests the coming into form—or, more popularly, the embodiment in flesh and blood—of that which is essentially formless and capable of assuming any form. A potential which has the ability to work in any fashion whatsoever can also work in only a given fashion and under a given condition. The principle of medicine is a general policy of setting right the functions of the physical organism, but it manifests itself as a specific prescription under a given condition. This is an analogy before us of how a formless methodology and a principle can take form for the purpose of activating the exact energies and powers that are required to set in alignment those components which have been placed out of gear, as it were, for some period, for certain reasons.