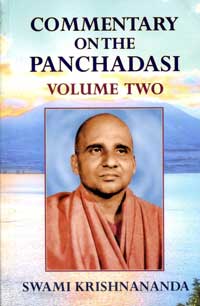 Sri Swami Vidyaranya’s Panchadasi, in the words of Worshipful Sri Swami Krishnanandaji Maharaj, is a masterpiece in Vedanta philosophy and spiritual practice. For the benefit of the earnest seekers of Vedanta, Pujya Sri Swamiji Maharaj gave 42 illuminating discourses on ‘Panchadasi’ from August to October 1989. The first volume comprising 21 discourses was released as our worshipful offering on Pujya Sri Swamiji Maharaj’s 94th Birth Anniversary on 25th April 2016. Now volume second consisting of remaining 21 discourses is being offered at his feet on the sacred occasion of his 15th Punyatithi Aradhana.

CHAPTER SIX: VERSES 1-18
CHITRADIPA
LIGHT ON THE ANALOGY OF A PAINTED PICTURE

The Sixth Chapter is called Chitradipa. This is a very important chapter of the Panchadasi, and very long, which lays practically the foundation for the whole philosophy of Vedanta. Philosophically, it is the most important of all the chapters. It has to be studied with great concentration.

Yatha dhauto ghatti tasca lanchito ranjitah patah, cidantar yami sutratma virat catma tather yate (2). The first stage in painting a picture is to have a cloth, a canvas. The second stage is to stiffen it with starch, because a piece of cloth with holes between the interwoven threads would not be suitable for the purpose of painting. The cloth has to become thick and impervious to the ink. For that purpose, the cloth is stiffened with a smearing of suitable starch. This is the second stage in painting.

In the third stage in painting, the artist draws a pencil sketch or a light sketch in some form on this stiffened canvas, which is barely visible and indistinctly cognisable as to its real features. We have some idea as to what is coming up when we have a perception of this faint outline that the artist has drawn on the canvas. This is the third stage.

The fourth stage is the fair copy. The lines that have been drawn are filled with ink in different colours as would be necessary to present the requisite picturesque scene. The variety, the beauty and the attraction of the picture is in the manner of the spreading of the ink in the requisite proportion. This is the fourth stage in painting, and then the painting is complete.

Likewise, there are four stages in the process of creation. Just as a background of cloth is necessary for painting a picture, an eternal, unchangeable background is necessary for even the appearance of such a thing called the world. An appearance cannot be there unless there is a reality behind it, and even falsity is so defined on account of its relationship with the truth from which it is distinguished. There is an all-pervading, unchangeable background which, as we have studied earlier, is Pure Consciousness. That is the first stage in creation. It has to exist, as the cloth has to exist.

The second stage here in this process of creation is the stiffening of the cloth, as it were. The Consciousness that is universal gets stiffened, as it were, by the concentrated will of the Cosmic Being. The featureless transparency of the universality of Consciousness gets concentrated with the stuff of the futurity of creation. This is what we call the will of God.

In Pure Being, there is no question of will. It is just Existence as such. In the second stage, there is a determination in Consciousness as to the nature of the creation that is to take place in the future. The third stage is the drawing of the outlines; that is the faint picture of the cosmos that can be seen in the state of Hiranyagarbha. The stiffened form is Ishvara; the Pure Consciousness is Brahman.

Thus, Brahman manifests itself as Ishvara. Ishvara becomes Hiranyagarbha, where the subtle cosmos can be faintly seen as an outline drawn to present the actual shape of the visible cosmos. The actual shape is not visible in the Sutratma, Hiranyagarbha. Only a faint outline is seen. The fourth stage is the gross manifestation of the universe with all the variety, the grandeur, the beauty and majesty. All the colours and the phantasms that we see in this cosmos is God filling in the variety of ink, as it were, on this outline that He has drawn in the state of Hiranyagarbha–prior to which there was a will to do, prior to which there was the background of the Absolute. So these are the four stages of creation, almost similar to the four stages of the painting of a picture.