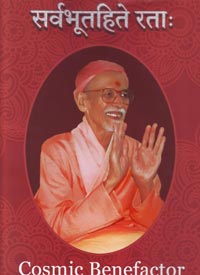 Footprints of mortals are found everywhere, scattered on the earth in all directions; but that of immortal masters are found only in the hearts of blessed human beings. It is for us to keep the doors of our hearts open and clean the inner ground of all the dirt and debris, plant flowers and let birds and butterflies sing and dance.

Lives of great men all remind us, we can make our lives sublime, and, departing, leave behind us, footprints on the sands of time.

Whatever I do with the body, speech, mind or the sense organs, either by discrimination of the intellect, or by the deeper feelings of the heart, or by the existing tendencies of the mind, all these I offer unto the Supreme Lord Narayana.

True devotee of the Lord beholds the sky, air, fire, water, earth, celestial luminaries, living beings, quarters, trees, rivers, oceans, in fact all that exists as the body of the Lord and devoutly prostrating greets all in worshipfulness and offers loving services to one and all. Worshipful Sri Swami Chidanandaj Maharaj was one of such divine souls who saw God in all, loved God in all and served God in all. His entire life was a constant adoration to the Supreme manifested in manifold names and forms, especially the poor and the sick, the destitute and the downtrodden. Service before self epitomized the life of this ever-compassionate saint. His all-embracing loving heart enveloped in its cosmic embrace everything in the universe from the magnificent galaxies to the smallest insect. The present pictorial Sarvabhutahite Ratah ‘Cosmic Benefactor’ portrays vivid glimpses of his sublime life and sacred mission.

With loving gratitude, this pictorial is offered at the holy feet of Pujya Sri Swamiji Maharaj, on the auspicious occasion of his 100th Birthday.

Once, the devotees of Gujarat arranged a puppet show on the life of Gurudev Sri Swami Sivanandaji Maharaj during night Satsang at the holy Samadhi Shrine. Here they showed Sri Gurudev starting a charitable dispensary near Lakshman Jhula and that he needed one servant to help in the dispensary work. So puppet of Sri Gurudev brought a sign-board for publicity of the dispensary as well as to announce his requirement of one servant.

The moment the puppet announced Servant wanted’, at once from the audience, Sri Swami Chidanandaji Maharaj rushed to the puppet of Gurudev Sivananda offering himself to become the first servant of the Master. Though Sri Gurudev was in the form of a puppet, Swamiji Maharaj saw Gurudev in it and offered himself as a servant. Swamiji beheld Gurudev at all times, at all places, in all conditions.

It is a regular practice in the Ashram that after everyone in the Ashram has partaken the Prasad, the food is distributed to the roadside beggars. Once, a new Brahmachari, who had a great dislike for the beggars, was assigned the Seva of distributing the food. He used to abuse the beggars angrily while giving food to them. One day, a beggar complained to Swamiji Maharaj regarding the Brahmachari’s rude and insulting behaviour towards them.

Next day, as usual that Brahmachari came to distribute food and shouted at the beggars, “You lazy fellows, you want to have food without doing any work.” That day, a new beggar covering himself completely with a blanket had also joined the other beggars. Giving little food to the new beggar, he yelled at him “Why have you covered your face? Remove this blanket.” And as the new beggar uncovered his face, the Brahmachari got a shock of his life. That beggar was none other than Swamiji Maharaj. He fell at the feet of Swamiji seeking forgiveness. Without getting angry, Sri Swamiji advised him to behave reverentially with all beings. Thereafter, he was sent on pilgrimage for one year as a wandering mendicant so that he could understand and feel the pathetic condition of beggars.

How beautifully, Sri Swamiji performed his roles as the friend of the forlorn and loving teacher of the aspirants.

Sri Swamiji Maharaj’s cult of non-violence is extended even to the small irritating insects like bugs and mosquitoes whom people kill almost by reflex action and do not feel any qualms whatever. Swamiji endures their stings and allows them to have their own way. Once while he was doing Kirtan of the Lord’s Name, a disciple saw a mosquito sitting on his body and attempted to drive it out. Before he could reach him, Swamiji indicated by sign not to disturb the creature. After the Kirtan was over, Swamiji told him, “The hungry one having appeased its hunger goes away automatically; you need not drive it out”. This is the unique state of a realized sage who in spite of his busy schedule in day-to-day life is constantly vigilant to observe Ahimsa and love for all creatures at all times.

A child and a saint
both have sweet seraphic smile.
Their smiles radiate beauty,
bliss and joy all around.
As both are egoless,
God Himself smiles
through their smiles
and shines through their eyes.