A picture painted by his devotees 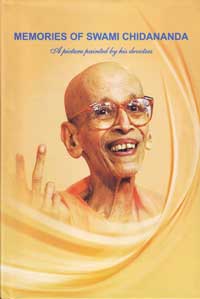 H.H. Swami Chidananda was born in South India in 1916 and surrendered to his Guru Sri Swami Sivananda in 1943. From then on he dedicated his whole life to the service of his Guru and the dissemination of his teachings till his Mahasamadhi in 2008. He experienced God in everything and everyone, and therefore his love and care was for everything and everyone—from the most insignificant to the most important, from the poorest to the most glorious. He had thousands of devotees and disciples all over India and the world. To be in his presence was a unique and indescribable experience and to listen to his words of wisdom and his singing stirred an awakening in one’s heart.

Some of his devotees have written down their memories which are collected in this book. They are written in simple language, full of love and devotion and will take the reader again into the sublime divine atmosphere which was around Swami Chidananda, one of the greatest saints of India.

A few months after H.H. Swami Chidanandaji’s Mahasamadhi there appeared in the Divine Life Magazine a short message inviting the devotees to put their experiences and memories in writing and send them to the Headquarters. This message had a big response and we received almost 200 write-ups. They were far too many to be included in either the Pictorial Biography‘Worshipful Homage’ or the Souvenir ‘Swami Chidananda – The Joy of Knowing Him’. These two books were published for the first Aradhana Punya Tithi of Swamiji in August 2009.

Now we have collected and edited all these Memories and present them in this book. They give a wonderful impression of the personality of our beloved Swami Chidanandaji—who actually had no personality at all, or a personality that was far beyond human comprehension.

May this book bring joy and wonder to all who read it.

May you ever be in constant and continuous remembrance of God, each second and each moment of your life! Live in God! – Swami Chidananda

In and through His disciples the Guru lives and continues to inspire others. – Swami Chidananda

Dedicated with love and gratitude to
our divine Masters

The real Chidananda is within you

I was fervently praying to the Lord to send me my Guruwho must be a self realized saint. My devout prayerand intense aspiration got fulfilled very soon as Iwas initiated by Pujya Swami Chidanandaji Maharaj in1978 at Sunabeda.

I was a beginner in the spiritual path; my devotionand faith were not so strong. I did not have theconviction that the Guru is antaryami. But oneincident changed my life. In 1981, I went to SivanandaAshram, Rishikesh, to attend Sadhana Saptaha withSankarshan Mangaraj of Puri. One day, while returningto the ashram after visiting Geeta Bhawan andParamartha Niketan, we found a beggar asking for acoin. As a beginner in divine life, I was religiouslypractising Gurudev’s instruction of “GIVE”. I searchedmy pockets for a coin. There was no coin and I foundonly one two rupee note. I was reluctant to part withtwo rupees for one beggar only as I could satisfyeight beggars with those two rupees, converting itinto small coins. I was indecisive and did not giveanything to that beggar. I was unhappy with myself. Wereached Samadhi Mandir for attending the afternoonprogramme. Param Pujya Swami Chidanandaji Maharaj wasaddressing the sadhaks. We took our seats in the back.To my utter surprise, Pujya Swamiji Maharaj wasexplaining the teachings of Swami Sivananda on thetopic “GIVE”. Swamiji said, “Giving is a sadhana. Ithas to be performed with large heart and properunderstanding. Suppose you have gone to the other sideof the Ganges. A beggar approaches you for a coin; yousearch your pockets and can bring out only one tworupee note. Coins are not available to you. You arethen indecisive and go on thinking that instead ofsatisfying eight beggars, why should I give it to one?This is not proper. Who is that beggar? He is LordNarayana. If you are hungry, can you appease yourhunger with a morsel of rice? How pitiable it is!While giving, it is proper only to fulfill one’s needto the best of our capacity. See always the Lord inthe receiver. Then ‘GIVING’ will be converted intodirect worship of God who dwells in you and in him andwho is both antarayami and sarvavyapak”.

I was stupefied and confounded as to what washappening. It was beyond my intellect to understand.How the master knew everything–tit-bit of my actions–on the other side of the Ganges? My thought process,in no time, touched the yogic mind of Sri Gurudev.Again, I was caught. In reply to the question in mymind, the compassionate master went on telling, “I amonly dummy Chidananda sitting here and talking to you.You are seeing my physical form. But the realChidananda is within you. I dwell in you as antaryami.I see everything, whatever you think and talk andwherever you are, I look after you.”

This unforgettable incident was a turning point in myspiritual life. From that moment, I was determined topractise “GIVING” as instructed by Sri Gurudev. Howcan I express the inexpressible blissful feelings ofmine! My experience is not a new experience. The worldknows that Swami Chidananda is antaryami andsarvavyapak.