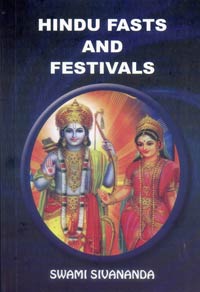 The Hindus are a profoundly religious people. Their goal of life is Self-realisation or the attainment of God-consciousness. In this book Gurudev has explained the significance and the philosophy of many of our fasts and festivals. In two aspects of these observances, he has always allowed the greatest freedom: (1) in the determination of the dates of the festival, which, as he has explained on page 53, vary, and (2) in the traditional ways of celebrating them. For instance, in South India during the Durga Puja they have the Kolu when various idols and toys are arranged in colourful gallaries before which, every evening, girls sit and sing. Again, in some places there is fire-walking without the Kavadi (see page 109), held in honour of Draupadi Amman who was born of fire; or in Ceylon, according to Yogi Satchidananda of Ceylon, in honour of Kannaki Amman. Gurudev never disturbs anyone’s good beliefs and customs.

Prayers for All Occasions

Devotees and followers of Sri Gurudev Sivananda in South Africa and elsewhere, follow Gurudev’s invariable custom of commencing all functions with the following invocatory Kirtans, and concluding them with the peace chants that follow.

MEANING: I prostrate myself before the five-faced Lord of Parvati, who is adorned with various ornaments, who shines like the crystal jewel, who is seated peacefully in the lotus pose, with moon-crested crown, with three eyes, wearing trident, thunderbolt, sword and axe on the right side, who holds the serpent, noose, bell, damaru and spear on the left side, and who gives protection from all fear to His devotees.

MEANING: I meditate on Sri Shankaracharya who is seated in the lotus posture with Jnanamudra, who is calm, endowed with virtues like Yama, Niyama, etc., whose glory is as great as that of Lord Shiva, who wears the sacred ashes on the forehead, whose face resembles the blossomed lotus, with lotus-like eyes, possessing sacred books in hand, who is ever adored by people of high learning and wisdom, and who fulfils the desires of his devotees (who prostrate themselves before him).

MEANING: I meditate on Lord Dattatreya, the son of Atri, who has six hands, who holds the rosary and water-vessel in two hands, with damaru and spear in the other two hands, and with conch and discus in the upper two hands.

MEANING: I worship the lotus feet of Ganesha, the son of Uma, the destroyer of all sorrows, who is served by the host of gods and elementals, and who takes the essence of the kapittha jambu fruit (fruit resembling the bilwafruit).

MEANING: I always take refuge in Lord Guha (Lord Subramanya) of six faces, who is of deep red colour and infinite knowledge, who has the divine peacock to ride on, the son of Lord Shiva and the leader of the army of the Devas.

MEANING: I know not any other Reality than the lotus-eyed Krishna with hands adorned with flute, looking like a heavy-laden cloud in lustre, wearing a yellow silk garment, with His lower lip like a ruddy bimba fruit, and with face shining like the full moon.

MEANING: One should meditate on Sri Ramachandra, with hands reaching the knees, holding the bow and arrows, seated in the locked-up lotus posture, wearing a yellow garb, with eyes vying with the newly-blossomed lotus petals, with a pleasant gait, who has Sita seated on His left thigh, who is blue like the clouds, who is adorned with all kinds of ornaments and having a big circle of Jata on the head.