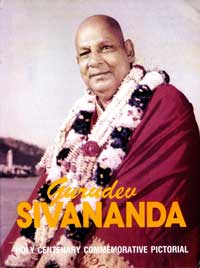 Preface
To the First Edition

To mark the holy Centenary of Worshipful Gurudev Swami Sivanandaji Maharaj, the Divine Life Society has embarked upon different projects of spiritual, educational, cultural and social welfare service. The personality of Swami Sivananda was of a super-social stature which held social values together in its comprehensive envisaging of the meaning of life. The needs of humanity attracted the attention of this great sage, to attend to which he devoted his entire life, by example as well as precept. Material necessities, known as creature comforts, generally take the lead among human demands–food, clothing and shelter–and to serve this primary need of people, the great Master in his Ashram provided for an Annakshetra, that is, a common kitchen, which denied food to none. Physical ailment is another source of trouble–sickness of every kind. A Charitable Hospital was established to attend to the medical aid requirement of everyone without distinction, a centre of medical treatment which rendered service entirely free of charge to everyone who came for such assistance. But the higher needs of human nature consist of educational values, cultural training and spiritual enlightenment. The enormous writings of this sage no doubt laid open through their pages recipes for almost every kind of inner awakening, touching practically every aspect of study and knowledge. Students who went to schools and colleges have been taken care of by the other wings of helping them through financial aid in their career of studies and every other requirement of students. There has also been a wide range of humanitarian work, for which an avenue was opened by the Master’s Ashram through its social welfare wing, which took particular care to redress people of their sorrows engendered by poverty, calamity or distress of any kind. But, above all things, there was the towering necessity of spiritual education and discipline for which the entire programme of the Ashram was streamlined in an integrated manner–to achieve God-realisation as the final goal of life.

The Year of the Centenary of His Holiness is the year 1987 A.D., his Birth Centenary culminating on the 8th of September, 1987. The present publication purports to be a humble attempt to portray the life and teachings of this Master in pictures and illustrations, which would indeed serve as a memento that should remain as one of the hallmarks in the many features that go to form the glorious Centenary celebration.