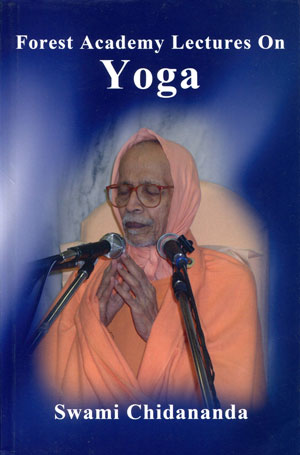 Yoga has been defined in various ways and mostly from the traditional or technical point of view. Nevertheless Yoga has been an attraction to the public in general, since it has always been regarded as a way to the realisation of the higher values of life. While there are commentaries on the Yoga scriptures from orthodox points of view, teachers have very rarely attempted to bring the loving message of Yoga to the hearts of people. Yoga is, indeed, a great discipline, but at the same time it is a solace to the feeling of the heart of man.

In the present publication Sri Swamiji has presented to the seeking public the knowledge of Yoga as it actually has to be imparted to the novitiates who wish to receive instruction in a parental fashion.

“A thrilling volume of highly inspiring lectures of Sri Swami Chidananda, a great saint and spiritual leader. The lectures cover all subjects of life, and I have no doubt that the publication of this volume will serve the cause of the preservation of our ancient Dharma, culture and way of life.” It was with these words that the founder of the Divine Life Society, His Holiness Sri Swami Sivanandaji Maharaj, blessed the first edition of this book in the year 1960.

Soon after Swami Chidananda joined Sivananda Ashram in the year 1943, Gurudev Sri Swami Sivanandaji continuously requested him to deliver lectures, especially for important functions. And as Gurudev felt that these talks should receive the widest possible circulation, he insisted that the lectures be taken down in shorthand and be published immediately in one of the Society’s magazines. He also frequently asked Swamiji to write articles for these same publications.

When Gurudev sent Swami Chidananda to the West in 1959, he wanted him to have a book to distribute to the many sincere aspirants he was meeting there. So, another of Gurudev’s foremost disciples, the late, revered Sri Swami Venkatesanandaji was given the monumental task of collecting and editing, in record time, over one hundred of Swamiji’s lectures and articles.

When the task was completed and the books printed and bound, they were sent to Swamiji at Vancouver, Canada. It was fitting that he should receive them there, as it was his Vancouver hostess, Sri Swami Sivananda Radha Mataji, who had originally approached Gurudev with the request that Swamiji be sent to the West. At the time the books arrived, Swamiji was giving two lectures a week on the Bhagavad Gita in Swami Radha’s ashram in suburban Burnaby, as well as two lectures on Raja Yoga in a room above her Yoga Vedanta Bookstore in downtown Vancouver.

Having come into contact with both Gurudev’s teachings and Swami Radha in the year 1959, I had become aware of Swamiji’s proposed 1960 visit to Vancouver. I met him the night of his arrival at Swami Radha’s ashram and then attended all his lectures. As a result I was fortunate enough to be one of the earliest recipients of that first edition.

In rereading the book thirty years later, I am forcibly struck by a number of thoughts and feelings. Most vivid is the sense that I am once again in the presence of the Swami whose presence and message during those few months in 1960 altered the course of my life. Again, while reading the book, I feel as if I am transported back to the Sivananda Ashram of the 1950’s. The occasions, the Ashram, Gurudev, the inmates and guests come alive through Swamiji’s words.

In addition, it is not difficult to see why Gurudev so frequently asked Swamiji to speak, and why he wanted his talks to have the widest possible circulation. Their clarity of thought, simplicity of expression and breadth of knowledge could not help but be of benefit to all levels of seekers. But it is Swamiji’s attitude, reflected in talk after talk, that is perhaps of most help to seekers. His attitude to the Guru, towards the scriptures, towards selfless service, towards everything about the spiritual life sets an ideal example for all those who would like to draw closer to God.

Swamiji’s life has been a constant inspiration to all, and that inspiration has overflowed into the talks and articles in this book.

Revered Gurudev Swami Sivanandaji’s worthy spiritual successor has been referred to as follows, “If one wants to see boldness of spirit behind a slender appearance, irrevertible command of heart behind a benign face, unwavering peace of mind behind dynamism of action, impersonal detachment behind personal love and care—all at once in a single person, one cannot do better than meet Swami Chidananda.”

Born on 24th September, 1916, into a wealthy Brahmin family in South India, Swami Chidananda absorbed love for tradition and respect for rituals. At Loyola College, Madras (now Chennai), Swamiji had la brilliant scholastic career. The ideals and teachings of Jesus made a deep impression in his heart, and he was able to synthesize them with all that is best and noble in Hindu Culture. The two profound influences in Swamiji’s life were the teachings of Sri Ramakrishna and the example of his Gurudev, Sri Swami Sivananda. He joined Gurudev in 1943 and from then on the Ashram and the lofty ideals of The Divine Life Society became home and field of service for him.

Swami Chidananda was born with an insatiable zeal to serve the sick and the suffering. Even in childhood he built huts for lepers on the lawns of his home and looked after them as though they were deities.

Swami Sivananda said about his spiritual son and beloved disciple:

“Chidananda is a Jivanmukta, a great Saint, an ideal Yogi, a Para-Bhakta and a great sage. Swami Chidananda is all this and much more. He was a great Yogi and Saint in his previous birth itself. His lectures are the outpouring of his saintly heart, the revelations of intuitive wisdom. And he is a practical Vedantin, his words have tremendous power. He is born to fulfil a great mission.” Swamiji Maharaj attained Mahasamadhi on 28th August, 2008.