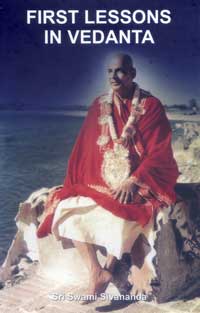 Vedanta literally means the end, conclusion or the culmination of the Veda. It is comprised of the Upanishads. It deals with the transcendental science of the Atman, or Brahma Jnana. It is the philosophical portion expounding the nature of the Atman, whereas the first portion of the Vedas, the Karma-Kanda deals with ritualistic observances and sacrifices. Vedanta expounds the true nature of the Self, declares that Brahman, the Supreme Self alone is real, the world and the diverse phenomena are unreal, and the individual soul is identical with Brahman. The Upanishads and the Brahmasutras are the most authoritative works on the Vedanta. Upon these intricate texts numerous voluminous complicated commentaries by several great Acharyas like Shankara, Ramanuja, Madhva, Nimbarka, Vallabha, have been written. They are extremely difficult and very lengthy works. And the language too is difficult Sanskrit. Therefore, to give a clear understanding of the basic principles of Vedanta philosophy in easy and simple manner these few lessons are given. They present the truths and the details of Vedanta philosophy in a way that can be read and understood by all and remembered without difficulty. This will give a good idea of the main outlines of the Vedanta philosophy, the details of which could be filled in later through a study of the bigger works. This is a groundwork for detailed Vedantic study. It equips the student with a preliminary knowledge of the Vedanta.

What is real? How to attain freedom?
How to transcend the body and the mind?
Who am I? Who is Brahman?
Who is a Jivanmukta? Who is a Videhamukta?
Vedanta Explains.

What is the Goal of life? How to reach it?
How to remove the obstacles? How to tear the veil?
How to destroy Dehadhyasa? Where to search for Brahman?
Vedanta Explains.

How to destroy Karmas? How to detach from Upadhis?
How to enter into Samadhi? How to stand as a witness?
How to become bodiless? How to practise Nididhyasana?
How to get the four means? How to do Shravana, Manana?
Vedanta Explains.

The glory of Kaivalya Moksha, the splendour of Brahman,
How to transcend the Koshas and the three Avasthas,
The three Doshas of the mind, the seven Jnana Bhumikas,
The Nature of Avarana and Vikshepa Saktis,
Vedanta Explains.

How to become fearless? How to enjoy Eternal Peace?
How to rest in Swarupa? How to delight in the Self?
How to attain Self-realisation? How to attain Immortality?
How to behold oneness? How to get a balanced mind?
Vedanta Explains.

(Dvandvatitam)-Beyond the pairs; beyond duality or relativity.

(Samyam)-All-complete condition of balance and repose.

(Apranam)-Without Prana or the vital breath.

(Satyam)-Existence; True or Truth; Being.

(Avangmanogocharam)-Beyond the reach of speech and mind.

(Trigunatitam)-Beyond the three Qualities of Prakriti.

(Trividhaparichchedarahitam)-Free from the three kinds of limitation.

(Sajatiya-Vijatiya-Svagata-Bhedarahitam)-Free from the three kinds of difference.

(Nirdvandvam)-Without pairs or opposites of duality.

(Avyavaharyam)-With which there can be no dealings.

(Niravayavam)-Without members or parts or limbs.

(OM)-The Symbol of the Absolute.

The One Being the wise diversely speak of.

The Purusha alone is all this, whatever was and whatever will be.

All this is (to be) indwelt by the Lord.

This syllable (OM), verily, is the Brahman.

(He is) attainable by him whom He chooses.

This is the best Support.

There is nothing greater than (or second to) the Purusha.

Knowing it, one is freed from the mouth of death.

Knowing the Atman, the hero does not grieve.

All this, indeed, is Brahman.

There is nothing diverse here.

Those who know this become immortal.

That Eternal is not attained through the non-eternal.

The Non-created is not (attained) through the created.

This universe is the Purusha alone.

He who knows this set in the secret place of the heart, rends asunder, here itself, the knot of ignorance.

Know that one Atman alone; abandon all other speech.

Which (It) shines as the Blissful Immortal.

There the sun does not shine.

After Him who shines, everything else shines.

Brahman alone is this universe, this greatest.

He who knows that Supreme Brahman becomes Brahman Itself.

OM-This syllable (the Imperishable) is all this.

The knower of Brahman attains the Highest.

The knower of the Self crosses beyond sorrow.

One who is established in Brahman attains Immortality.

In the beginning, the Atman, one alone, was all this.

By which the Unheard becomes heard, the Unthought becomes thought; the Ununderstood becomes understood.

That which is Unconditioned is Bliss; there is no bliss in the small.

That which is Unconditioned is Immortality.

I alone am all this.

The Self alone is all this.

Pleasure and pain do not touch the Bodiless Being.

Brahman, verily, was this in the beginning.

Existence alone (dear one!) was this in the beginning, one alone without a second.

One should meditate on the Self alone as dear.

He who knows (thus), ‘I am Brahman’,-He becomes this all.

As the Self, alone, one should meditate (on it).

From the unreal lead me to the Real; from darkness lead me to Light; from death lead me to Immortality.

There is no hope of Immortality through wealth.

For the love of the Self does everything become dear.

Lo, the Self is to be beheld, heard, thought over and meditated on.

By the vision, by the knowledge, of the Self, all this is known.

All this is just what this Self is.

By which one knows all this-It, by what can one know?

Lo, by what should one know the Knower?

This is the Self; this is Immortal; this is Brahman; this the all.

This is thy Self which is in all things; what is other.

It eats nothing; none eats it.

This Imperishable is the unseen Seer; the ununderstood Understander. There is no seer but That; there is no understander but That.

An ocean, the Seer alone, without duality, does he become; this is the Abode of Brahman.

That is Light of lights.

As One alone is it to be seen, this immeasurable stable one.

This great unborn Self, undecaying, deathless, immortal, fearless, is Brahman.

By knowing Him alone one goes beyond death.

By that Purusha is all this filled.

The one God is hidden in all beings.

This Self is Brahman.

That is Full; this full. From the Full does the full proceed. Taking the full from the Full, the Full alone remains.

Aparoksha-Brahma-Jnana is direct realisation of the Self through intuition.

Brahmakara-Vritti is generated from the pure mind which is equipped with the four means, by meditation on the Self. Chit is pure consciousness or Knowledge-Absolute.

Dama is restraint of the senses.

Ekamevadvitiyam Brahma: Brahman is one alone without a second.

Faith in the teachings of the Shrutis and the Guru and in one’s own Self is very essential for the attainment of Self-realisation.

Gaudapada was the first systematic exponent of Vedanta.

Hridaya-granthi or the knot of ignorance is annihilated by attainment of Brahma-Jnana.

Ishvara is Sopadhika-Brahman, associated with Maya.

Jiva is identical with Brahman, when its ignorance is destroyed by knowledge of the Self.

Kutastha is Sakshi or silent witness of the mind.

Laya of the mind cannot give you salvation.

Mahavakyas or the great sentences of the Upanishads are four in number; “Prajnanam Brahma,” “Aham Brahmasmi,” “Tat Tvam Asi,” and “Ayam Atma Brahma.”

Nididhyasana is constant and profound meditation on the Self or Brahman, after reflection (Manana).

Om is the symbol of Brahman.

Quintessence of Vedanta is the identity of Jiva with Brahman.

Rajas is passion which obstructs the dawn of knowledge.

Soham, “I am He,” is a good formula for Vedantic meditation or Ahamgraha Upasana.

Titiksha is power of endurance.

Uparati is satiety or renunciation of works and taking up of Sannyasa.

Viveka is discrimination between the real and the unreal, the permanent and the impermanent.

Wealth of the Atma is real inexhaustible wealth.

X’mas holidays must be well utilised in Vedantic Sadhana.

Yathartha-Brahma-Jnana or real knowledge of Brahman alone can give you Moksha.

Zeal and earnestness are indispensable, if you wish to have quick progress towards Atma-Sakshatkara.