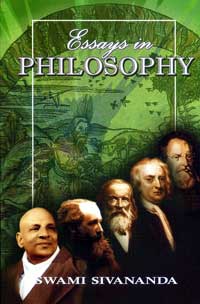 This illuminating volume has been specially written for those who are soaked in Western philosophic thought and the scientific method of arriving at conclusions. These Essays in Philosophy are not based on mere belief or superstition, not on mere scriptural injunctions and declarations, but on good reason backed by the personal experiences of a living Sage of Self-realisation. As such, they are bound to appeal to, and transform, people of all shades of thought and opinion.

These essays were first serially published in the monthly Journal of the Durban Branch of the Divine Life Society, THE PATH TO GOD-REALISATION, and have had a very good reception in South Africa, especially in view of the fact that the use of Sanskrit technical terms, inevitable in most dissertations based on Oriental Scriptures, has been kept to the barest minimum.

We do hope that this presentation will appeal to the mind and the heart of modern English-educated youth of all nations.

Philosophy and Teachings of Sivananda

There is an innate urge in everyone to attain Immortality, higher Knowledge and eternal Bliss. This gives the clue that Brahman exists.

The Supreme Reality is Self-luminous, Self-contained. It is Sat-Chit-Ananda. It is all-full. It is Perfect. By realising this Brahman alone you can attain Liberation.

Sorrow has the body as its cause. The body has Karma for its cause. Karma proceeds from the notion of “I”. The idea of “I” has ignorance for its cause. The erroneous notion that “I am the body” is called Avidya or ignorance. It binds the man. “I am not this body, but blissful, all-pervading Atman”—this is called Knowledge. This will liberate you.

A life of right conduct is a necessary factor in the enquiry into and discovery of Atman or Brahman, the source and basis for this world, body and mind.

Righteousness forms the bedrock of all religions. Righteousness is the divine path. Dharma is the perfect pattern of life.

Serve, love, sing, give, purify, meditate, realise. Be good. Do good. Be kind. Be compassionate. Be honest. Be sincere. Be truthful. Be bold. Be pure. Be virtuous. Develop the Four Means. Enquire “Who am I?” Know the Self and be free. This is the essence of Sadhana.

Karma Yoga, Bhakti Yoga and Raja Yoga are the means to Jnana. Karma removes the impurities of the mind. Bhakti Yoga removes the oscillation of the mind and softens the heart. Raja Yoga steadies the mind. Karma, Bhakti, Yoga and Jnana do not mutually exclude each other. Bhakti is not divorced from Jnana; on the contrary Jnana intensifies Bhakti. Para Bhakti and Jnana are one.

Moksha or Liberation is not a thing to be attained. It is already there. You will have to know that you are identical with the Supreme Reality through intuition.

Samadhi is an experience in which the aspirant feels his oneness with Brahman or the Supreme Reality. Samadhi is intense awareness of the Reality. It is the Highest intuition. It is an experience of fullness. It transcends duality of all kinds. He who has experienced Samadhi becomes wise and illumined.

May you be established in Samadhi through discrimination, dispassion, serenity, intense yearning for liberation and the Grace of the Lord!

The ox knows its owner and the ass its master’s crib but the children of Israel—even being human beings—became forgetful of God, their own Lord. Like the people of other nations, they persisted in folly and superstition. It tired the Lord very much and He spoke to the people—through the vision of Isaiah, the son of Amoz—saying, “…when ye spread forth your hands, I will hide mine eyes from you: yea, when ye make many prayers, I will not hear: your hands are full of blood.”

What will the Lord say if He were to speak once again to all of us? Have we washed ourselves clean of all iniquities or tried even to minimize them? Alas no. The history of the last so many hundred years testifies to all the wrongs done by man. It has proved the suspicion that the greatest danger to man and his civilisation is still from man himself. Believers and Unbelievers alike have proved unworthy of the Kingdom of God. Those among us who disbelieve in God do not with the same sincerity disbelieve in greed, pride, violence and exploitation. Those that love material prosperity, earthly pleasures, permanence of fame and preservation of name, do not, in the same vein, love justice, humility and equality.

They loved things; they got them. They loved civilisation with a breath-taking grandeur; they got it, this is all good and natural. But what is regrettable is that this edifice should be erected upon human skeletons, that poverty should be the prop of civilisation. This is the house that is built upon sands and would, very soon, fall down as a house of cards. So much for the Unbelievers. But the so-called believers are even worse. They too have not built their house upon the “rock” that Jesus gave. They affirmed God in words but denied Him in deeds. Fought and killed each other in His name without knowing what He is. They died for God but did not live for Him.

Why do men so mismanage their affairs and why do they make simple things complex, is a question which no thinking individual can avoid. Is it because they do not know their own true good? Or is it because of the innately depraved nature of man? Will the injustice and fear from man to man ever cease or will it continue in spite of ourselves? These are the questions that none can avoid. To ask such questions and to try to answer them methodically is philosophy. Some one may say that he does not want philosophy nor does he want to think any more about such disturbing ideas. He would live life rather than think about it. This is very well, if only it were possible. But unfortunately to live is to think. There is no choice so far as thinking is concerned. It is absolutely inseparable from life. The only choice is between correct and incorrect thinking. Let us hope that there is none among us who would prefer to think in the wrong way. To think correctly is philosophy. If we do not think for ourselves about our problems, then the only other way is to take readymade solutions suggested by market opinions, newspapers and such other unreliable sources. This is what converts people into a “mob.”

“Unexamined life is not worth living” said Socrates. And he was right. But it may be asked that science too is doing systematic thinking, then what is special about philosophy? Nothing very particular. Only the object of science is a part of a special aspect of the world while philosophy tries to know the nature of the world as a whole; the worth and value of existence and life as a whole. Is life only a “tale told by an idiot full of sound and fury signifying nothing,” or is there meaning behind the waxing and waning of moon, the changing of seasons and the million other things? Are we all here as on a darkling plain ignorantly stumbling against each other or there is a mission with each of us who exists; some purpose to be fulfilled? These questions are the subject matter of philosophy, not of Science. We can see how important the questions are!

Everyone asks these questions but everyone is not in a position to answer them. Why? It is partly because of capacity and partly because of the difficult nature of the questions themselves. But above all due to the absence of a proper method to arrive at a correct answer. So philosophy is also concerned to find out a method.

After a close investigation philosophers have discovered a few methods, good, if not perfect. Among them three are of great importance.

The first two are good to a great extent but they soon arrived at a limit beyond which they cannot go without being contradictory. For an answer to the ultimate questions concerning human death and fate they need to be supplemented by yet another method, namely that of direct knowledge. Some wise men, as the result of intense meditation into the hidden profundities of the universe, have discovered the significance of life. But they do not tell us of that in language. Even if they tell, we will not understand because their meaning is not our meaning. But they give us the same wisdom in quite another way. By giving us a way of life governed by certain ethical principles. This is the way of wisdom. The eight-fold path of Buddha, Sermon on the Mount of Jesus are the examples. It would lead to the reality of life even without discussion. Gradually the meaning, quite of itself, will unfold before us. It is of the nature of a torch on a perilous path. Do not abandon it without giving it a fair trial. Believe that the wise ones did not come to mislead us but to save us from a myriad dangers that beset the earthly life. Jesus said, “I came to fulfill and not to destroy.” And it is true.

If we disbelieve, they do not leave us nor criticise us. But sudden rejection may not be safe. What is the other way except making curious guesses concerning the riddles of existence? All this will end, as in Omar’s case, with the conclusion

“Up from Earth’s Centre through the Seventh Gate
I rose, and on the Throne of Saturn sate,
And many Knots unravelled by the Road;
But not the Knot of Human Death and Fate!”