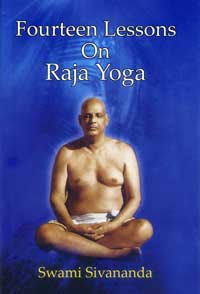 Yoga is complete life. It is a method which overhauls all aspects of human personality. Yoga is a system of integral education. The science of Raja Yoga is universal, it is applicable to all.

The fourteen elementary lessons on Raja Yoga are an enumeration of Patanjali’s octagonal system which begins with ethical discipline and ends with the final dissolution of the individual perception in the cosmic consciousness. No impossible methods are advocated herein. No allegiance is demanded to a particular cult. Here indeed is shown the way to live full and happy life to one’s own personal advantage and usefulness to others.

The fourteen elementary lessons on Raja Yoga are meant for the seeker who said, ‘Yoga is my ideal, but I know not whether it is a kind of mystic esoterism of the psyche, or a process of acquiring supernatural feats coveted by early mortals.’ Here is, consequently, a comprehensive, clear and succinct exposition of the wonderful, psycho-analytical and highly rational system of Raja Yoga, which goes a long way to dispel wrong notions of its true nature, and emphasises its extraordinary value in the emolument of true happiness and an integral development of the personality of man.

Here is found an enumeration of Patanjali’s octagonal system which begins with ethical discipline and ends with the final dissolution of individual perception in the cosmic consciousness-whole. Auxiliary notes have been added to this to specify the qualifications required of a Yogic student, the diet to be chosen, the process of harmonising the mental modifications, etc. Added to these is an exposition of the Philosophy of Om which provides a basis for the practice of concentration and meditation.

To refresh your memory and to help summarise each lesson, questions have been given at the end of every lesson.

No impossible methods are advocated herein. No one need forsake his or her avocation to pursue the path of Yoga. No sectarian doctrine hovers round its objectives. No allegiance is demanded to a particular cult. The science of Raja Yoga is universal, it is applicable to all. Here indeed is shown the way to live a full and happy life to one’s own personal advantage and usefulness to others.

Yoga is complete life. It is a method which overhauls all aspects of the human personality. Yoga is a system of integral education, education not only of the body and the mind or the intellect, but also of the inner spirit.

Yoga is a science perfected by ancient seers of India, not merely of India, but of humanity as a whole. It is an exact science, a perfect, practical system of self-culture.

A WAY OF LIFE

Yoga does not require turning away from life. It demands transformation and spiritualisation of life. Yoga is primarily a way of life, not something which is divorced from life. Yoga is not forsaking an action, but is efficient performance in the right spirit. Yoga is not running away from home and human habitation, but a process of moulding one’s attitude to home and society with a new understanding.

Yoga is for all and is universal. It is not a sectarian affair, but a way to God and not a creed. The practice of Yoga is not opposed to any religion or any sacred church. It is purely spiritual and universal and does not contradict any one’s sincere faith.

Yoga is not a religion, but an aid to the practice of the basic spiritual truths in all religions. Yoga can be practised by a Christian or a Buddhist, a Parsee, a Mohammedan, a Sufi or an atheist. To be a Yogi means to abide continuously in God and to live at peace with men. Yoga is union with God, union with all. God dwells in all.

YOGA IS NOT A PHYSICAL EXERCISE

The idea of the novice that Yoga constitutes physical exercises or mere postures and Pranayama, etc., is an error. These have nothing to do with real Yoga. These are considered to be aids in Yoga practice.

Most people do not have access to Yoga beyond its physical level, because the true Yoga demands intense personal discipline, coupled with intense thinking under the guidance of an able teacher. Yoga promises super-physical and spiritual blessing. It becomes unattractive to a common man who clamours for immediate fruits and worldly prosperity.

Moral purity and spiritual aspiration are the first steps in the path of Yoga. One who has a calm mind, faith in the words of his preceptor and the scriptures, who is moderate in eating and sleeping, and who has intense longing for deliverance from the wheel of births and deaths is a qualified person for the practice of Yoga.

An austere and simple life is indispensable for Yoga. The foundation of Yoga is self-control. Discipline is the essence of Yoga, discipline of body as well as discipline of the mind.

Some maintain that the practice of Karma Yoga alone is the means of salvation. Some others hold that devotion to the Lord is the only way to God-realisation.

Some believe that the path of wisdom is the sole way to attain the final beatitude. There are still others who hold that all the three paths are equally efficacious to bring about perfection and freedom.

THE YOGA OF SYNTHESIS

One-sided development is not commendable. Religion must educate and develop the whole man—his heart, intellect and hand. Only then will he reach perfection.

Man is a strange, complex mixture of will, feeling and thought. He wills to possess the objects of his desires. He has emotion; and so he feels. He has reason and so he thinks and rationalises. In some emotional element may preponderate, while in some others the rational element may dominate. Just as will, feeling and thought are not distinct and separate, so also, work, devotion and knowledge are not exclusive of one another.

In the mind, there are three defects, namely, impurity, tossing and veil of ignorance. The impurity should be removed by the practice of Karma Yoga. The tossing should be removed by worship. The veil should be torn down by the practice of Jnana Yoga. Only then Self-realisation is possible. If you want to see your face clearly in a mirror, you must remove the dirt in the mirror, keep it steady and then remove the covering also. You can see your face reflected clearly on the lake only if the turbidity is removed, if the water that is agitated by the wind is rendered still, and if the moss that is lying on the surface is removed.

Action, emotion and intelligence are the three horses that are linked to this body-chariot. They should work in perfect harmony or unison. Only then will the chariot run smoothly. There must be integral development. You must have the head of Sankara, the heart of Buddha and the hand of Janaka.

To behold the one Self in all beings is Jnana, wisdom; to love the Self is Bhakti, devotion; to serve the Self is Karma, action. When the Jnana Yogi attains wisdom, he is endowed with devotion and selfless activity. Karma Yoga is for him a spontaneous expression of his spiritual nature, as he sees the one Self in all. When the devotee attains perfection in devotion, he is possessed of wisdom and activity. For him also, Karma Yoga is a spontaneous expression of his divine nature, as he beholds the one Lord everywhere. The Karma Yogi attains wisdom and devotion when his actions are wholly selfless. The three paths are in fact, one in which the three different temperaments emphasise one or the other of its inseparable constituents. Yoga supplies the method by which the Self can be seen, loved and served.

Yoga brings perfection, peace and lasting happiness. You can have calmness of mind at all times by the practice of Yoga. You can have restful sleep and increased energy, vigour, vitality, longevity and a high standard of health. You can turn out efficient work within a short space of time and have success in every walk of life. Yoga will infuse new strength, confidence and self-reliance in You. The body and mind will be at your beck and call.

Yoga brings your emotions under control and increases your power of concentration at work. Yoga disciplines, gives poise and tranquillity and miraculously rebuilds one’s life. The Yoga way of life deepens man’s understanding and enables him to know God in relationship with Him.

Yoga leads the way from ignorance to wisdom, from weakness to strength, from disharmony to harmony, from hatred to love, from want to fullness, from limitation to infinitude, from diversity to unity, and from imperfection to perfection. Yoga gives hope to the sad and the forlorn, strength to the weak, health to the sick and wisdom to ignorant.

Through Yogic discipline, mind, body and the organ of speech work together harmoniously. For a Yoga practitioner, a new outlook, a new health, a new awareness and a new philosophy rush in and vividly transform his life. Lust for power, material greed, sensual excitement, passion for wealth, selfishness and lower appetites have drawn man from his true life in the spirit into the materialistic life. He can regain his lost divine glory if he practises, in right earnest, the principles of Yoga. Yoga transmutes animal nature and raises him to the pinnacle of divine glory and splendour.

It is within the power of everybody to attain success in Yoga. What is wanted is sincere devotion, constant and steady practice. Spiritual growth is gradual. There is progressive evolution. You should not be in a feverish to accomplish great Yogic feats or enter into the superconscious state in two or three months.

A NOTE OF CAUTION

If a Yogi is not careful, if a Yogi is not well established in the preliminary practices of Yama, Niyama, he is unconsciously swept away from his ideal by temptation. He uses his powers for selfish ends and suffers a hopeless downfall. His intellect becomes blind, perverted and intoxicated. His understanding becomes clouded. He is no longer a divine Yogi. He becomes a black magician or Yogic charlatan. He is a black sheep within the fold of Yogis and is menace to the society at large.

Many people are attracted to the practice of breath control and other Yogic exercises, as it is through Yoga that psychic healing, telepathy, thought-transference and other great powers are obtained. If they attain success, they should not remain there alone. The goal of life is not ‘healing’ and ‘powers.’ They should utilise their energy in attaining the highest.

Yoga is not for attaining powers. If a student of Yoga is tempted to attain powers, his further progress is seriously retarded and he has lost the way. The Yogi who is bent upon attaining the highest superconscious state must reject psychic powers whenever they come. Only by rejecting these powers can one attain success in Yoga.

Do not stop spiritual practices when you get a few glimpses and experiences. Continue the practice until you attain perfection. Do not stop the practice and move about in the world. Examples are not lacking. Numerous persons have been ruined. A glimpse cannot give you safety.