PHILOSOPHY AND TEACHINGS
OF SWAMI SIVANANDA 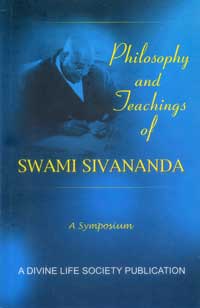 The uniqueness of Sri Swami Sivanandajiĺs writings has been acclaimed to be the freedom that he allows each individual seeker to pursue the path he is best fitted for, while emphasising the need for an integration of his personality by harmonising the head. the heart and the hand. Swamiji has rediscovered the various paths to Godhead, and flooded them with the light of his own Realisation.

Publishersĺ Note To The First Edition

Several volumes of the "Philosophy and Teachings of Sri Swami Sivananda" have already been published. A few await publication.

In this volume are presented the view points of several eminent men of lettersŚEastern and Western. We are confident that it will stimulate the interest of others in this vast field of spiritual literature.

Do We Really Want Peace?


(Speech delivered before the Rotarian Club in Djakarta, Indonesia)

I happen to be the chairman of the Divine Life Society in Indonesia and also an appointed District Commissioner of the A.M.O.R.C. of San Jose. Let me explain what these organisations stand for.

The Divine Life movement founded by Sri Swami Sivananda Maharaj in 1936 in Rishikesh (Himalayas) represents the quintessence of the teachings of all the religions and of all saints and prophets of the world. In other words, it is based on the highest common factor of the best that there is in religions. It is concerned with religion in the practice and pursuit of a Divine Life.

This Society now covers all corners of the world with more than 300 Branches in India and over 200 Branches elsewhere in the world. Although Indonesia counts many disciples of the Revered Guru, the first Branch was established in 1955 in Malang, followed by Djakarta, Surabia, Bogor and Seemarang.

The young renowned doctor, Swami Sivananda, renounced the world in 1923 to follow spiritual education. While practicing Yoga and Vedanta in seclusion, he would interrupt his solitude to serve the sick and the suffering. He gained Self-realisation and founded the Divine Life Society in 1936.

His philosophy of Serve, Love, Meditate and Realise has a magnetic force. It attracts all. Sivanandaĺs loving service, his intense austerities and his deep meditation have given him immense spiritual enlightenment and power. Thousands have come in order to receive spiritual guidance and to obtain the blessings of the Self-realised Saint, who loves God by loving and serving His despairing creatures.

His teaching is not a religious creed, but a helping hand extended to all, whatever race, colour or faith they bear. His numerous books mostly on his spiritual method are written in Hindi and in beautiful English. They are clear, instructive, and glowing with self-experienced wisdom. Some are also translated into French, German, Spanish and Russian, and are obtainable in many libraries. Spiritual giants of his stature are needed in our days of restless strife more than ever before, as living examples of love, goodwill, and tolerance among all men.