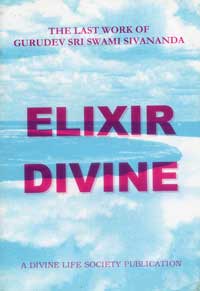 We are happy to present to the public and the seeker-world in particular this further reprint of His Holiness Sri Swami Sivanandaji’s last work, ‘ELIXIR DIVINE’. This little book of profound teachings from a mighty saint of the modern age attracted many an aspiring soul and we found that in a short period all the copies of the previous edition got quickly distributed and a necessity was felt to bring out this edition. We have a firm hope that the Sadhakas the world over will deeply benefit by a study of these precious gems of wisdom contained in this beautiful work of inspirational writings from the pen of the great saint.

This should, indeed, be vade-mecum for the aspirants on the Path.

In this complex universe, life is an inexplicable mystery that touches both this world as well as God at the same time. Its source is in God; its manifestation is upon this world of names and forms. When human life loses conscious contact with God and drifts away from the central reality, it gets enmeshed in the world-process, and the result is misery, sorrow, suffering, grief and pain. When human beings get caught in such a condition and move away from their awareness of God, then holy men of God, saints and sages of realisation point the way out of this bondage and restore to them the inner contact with their source. Man finds again the peace and bliss that he has lost through his spiritual forgetfulness.

The worshipful Guru Swami Sivananda was an illumined saint, who helped to restore this relationship of man with God in the Twentieth Century, when, more than ever, the world occupies man’s mind, leaving no place for God in his life. ELIXIR DIVINE is the last work of H.H. Sri Swami Sivananda before he laid aside his mortal vesture. It is verily true to its name, for through its pages we get the vivifying portion of Divine Wisdom by which we are spiritually revived and the life in tune with Divine is restored to us. It is a great sage’s last message to mankind, bestowed out of His abundance of love to humanity. I wish its readers inward illumination and the needed solace.

Silence is Peace.
Silence is Brahman or the Absolute.
Ayam Atma Santah—
This Atman is Silence.
Behind all noises and sounds
Is Silence—thy innermost Soul.
Silence is thy real Name.
Silence strengthens thought-power.
Silence is intuitive experience.
Silence helps the intuitional Self
To express itself.
To go into Silence is to become God.
Enter into Silence
And become one with the Supreme Soul.

1. A am the body” is ignorance. ” I am Pure Consciousness” is wisdom.

2. Religion is philosophy practised in life.

3. By purchasing worldly enjoyments we sell the freedom of the soul.

4. The Law of spiritual evolution is service and sacrifice.

5. Atman or the Self cannot be defined in words, but can be experienced through intuition.

6. Desire implies a sense of want. Desire is imperfection.

7. Sow the seeds of devotion in the field of the heart. Water it with aspiration. Fence it with Satsanga to ward off the animals of passions. You will reap the rich harvest of peace and bliss.

9. The Supreme Reality or Brahman is not merely an intellectual quest, but a spiritual conquest.

10. Faith cuts asunder the veil that hides God. Commune with Him and merge in Him. This is your goal.

11. Prayer is lifeless when there is no faith.

15. When the Divine virtues increase, the mind will recoil from the pleasures of the senses.

18. Purified by the fire of wisdom one attains the state of God.

19. The fire of passion burns your soul.

20. With every experience you evolve a little.

21. All outer facts and conditions correspond to the inner growth of the soul.

23. Death is a recurring incident in an everlasting life.

24. All good actions have their beginning in good thoughts.

27. Identification with the Supreme Spirit is the culmination of human existence.

28. Any action that takes us Godward is a good action.

30. Raga. Dvesha and Bhaya (attachment, repulsion and fear) are the products of ignorance.

31. Religion starts with fear, passes through love and adoration and culminates in the union with the Lord.

32. Enter the kingdom of the Lord through the gate of sacrifice.

33. When the external pleasures are renounced, internal bliss is realised.

34. Pride of renunciation is more harmful than pride of wealth.

35. Religion is the realisation that man, in essence, is God.

36. Die to matter and be born in the Spirit.

37. ‘World is unreal’—this is for a man of discrimination. ‘World is God’-this is the experience of a saint.

39. Fogs of worldly thoughts obscure the vision of God.

40. When the sun of wisdom rises, the fog melts and there is vision of God.

42. Begin each day as if it is the beginning of a new life.

43. Where there is love, there is peace and harmony.

46. Knowledge is virtue. Ignorance is vice.

47. Selfishness is vice. Selflessness is virtue.

50. Religion is a pathway to Perfection.

1. Just as drug makes a man enter into deep sleep, so comforts and luxurious living drug the Divine in man and sink him into the deep slumber of ignorance.

2. Retire into the solitude. Negate all that is cognised. Discard them one by one. Transcend them. You will realise the Self.

4. The Atman or the Self is there at all times. Just as things in a room which are invisible in the darkness become visible the moment light is brought into the room, similarly the Self remains hidden due to the darkness of ignorance and becomes visible when the light of Wisdom is brought forth.

5. Self-realisation is not attained by intellectual activity but attained by the cessation of all mental modifications.

6. If you try to attain Self-realisation by the effort of the intellect it will be just like trying to stamp with one’s foot on the shadow cast by one’s own head.

7. Objects are only reflections in the Eternal Supreme Consciousness.

8. With a perfectly still mind if you can become aware of the interval between two perceptions, you can get a glimpse of Pure Consciousness.

9. Prevent your mind from going outwards, become still and watch it. You will succeed in attaining God-realisation.

10. That state which, like a thread in a flower-garland, passes through the three states of waking, dream and deep sleep, is the Real Self.

11. Just as the rays of the sun are invisible but are capable of illuminating objects, Consciousness, though invisible, illumines everything.

13. The transient blissful state which you experience during meditation is due to the reflection of the Self through Anandamaya Kosa.

14. From the womb of devotion is born the child of wisdom.

19. Since the Absolute Consciousness is infinite, the creation cannot be outside it.

20. Self-forgetfulness or forgetting one’s own Pure Self is verily suicide.

22. The essence of Kundalini Yoga is the union of the Sakti with Lord Siva.

24. When objects are moving in front of a man, if he wants to see the space, he has only to turn his attention away from the objects; similarly if the attention of the mind can be turned away from all thoughts that pass, Self will manifest itself.

26. Every moment in the waking state that is free from thought is a state of Samadhi. It is unnoticed because it lasts only for a fraction of a second.

31. Pride is a sin. Identification with the body is a sin. Selfishness is a sin. Ignorance is the greatest of all sins.

32. Doubt is a sin. Forgetfulness of God is death.

33. Wisdom of the Self is the ripe fruit of the beautiful flower of virtue.

34. God reveals Himself in different ways to different devotees according to their stages of development and aspiration.

35. When the beast in man perishes, the God in man manifests.

36. The Universal Law never favours anyone. It deals with every man as he deserves.

37. Eternal joy resides within the fortress of unselfishness.

38. Justice, humility, compassion are the fundamental virtues of a saint.

40. It is better to suffer loneliness than to be in evil company.

41. Conscience is the Divine Fire which burns you when you do a wrong act.

42. Prayer is the mystic bridge built across the gap between God and man.

44. No one can go through life without making mistakes. Do not brood over the mistake. Repent for it; then forget it, but remember the experience gained.

46. Body and mind are governed by law.

47. There is neither pre-ordination, nor exertion. God does everything; but man on account of his egoism feels that it is he who is doing.

48. If you are perfectly free from desires and egoism you will not enter again into birth and old age.

49. He is a Jivanmukta who rests in his own Satchidananda Atman.

50. I am always the knower, the knowing subject. I can never become an object.

51. Atman is always the knower. It can never become the object of perception as it is extremely subtle and infinite.

52. Forget and remember. Forget the body. Remember “I am the all-pervading Immortal Soul.”

53. Remember. Remember God. That is all. Nothing is to be added.

55. He who is contented and calm is happy.

56. Happiness comes from within. It cannot come from without.

57. Happiness is in one’s own Self, and not in objects.

58. Happiness comes when the individual merges in God.