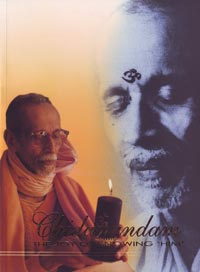 “When you closely follow Swami Chidananda’s lectures, you will find that all the Upanishadic wisdom is brought out in them, though he has not studied the Upanishads and does not even want to study them. He brings Upanishads from his heart. He is any embodiment of the Brahma Sutras and the Gita. I have found out of-late that whenever he talks on Bhakti, and Nishkamya Karma, he always ends in Vedanta. That shows that if you are earnest in Sadhana and deeply devoted to God, Vedanta or knowledge of the Brahma Sutras come by itself.”

This book is in fact a blue-print for [an aspirant to become] a Jivanmukta. In it is contained a clear description of the characteristics of a great saint, an ideal Yogi, a para-Bhaka and great sage.

The reader cannot fail to be inspired to cultivate some great virtues, to take to intense spiritual practices, to plunge himself in selfless service of humanity, and in every way to be a better citizen of the world, actively working for human weal and radiating peace and happiness to one and all….

[The above words appeared in the inside cover of the ‘Swami Chidananda – His Life and Work (Thirty-Ninth birthday Souvenir)’. Fifty Five years later, even as we publish this book, on the Holy occasion of His First Punyatithi Aradhana, the words remain as appropriate an expression to highlight the purpose for this Publication.]

“In 1954, when Worshipful Swamiji was at the age of Thirty-Eight, I heard Gurudev saying – Chidananda is a jeevanmukta, a great Saint, an ideal Yogi, a Para-bhakta and a great Sage. Swami Chidananda is all this and much more….

He was born to fulfil a great mission. He is the torch-bearer of my mission, said Gurudev Sivanandaji Maharaj.”

With great joy we place before the devotees of Sri Gurudev H.H. Sri Swami Sivanandaji Maharaj and all well wishers of the Divine Life Society this Souvenir. It is being released on the holy occasion of the first Punya Tithi Aradhana of Param Pujya Sri Swami Chidanandaji Maharaj, on the 18th of August 2009.

Since the Mahasamadhi, the Headquarters and various Branches of the Divine Life Society have been organizing Swami Chidananda Memorial Lectures at different places in India and abroad. These lectures reveal that although Pujya Swamiji Maharaj left his physical body, he continues to live more vibrantly in the hearts and memories of people all over the world.

As Valmiki has said:

(The theme of the Ramayana will continue to be popular on earth, as long as mountains and rivers exist.)

Pujya Swamiji Maharaj was a devotee of Sri Rama and lived like Sri Rama, upholding dharma in his life, teachings and mission. He loved one and all and had concern and respect for all life. He was unique and universal. He will also, as Valmiki has predicted in the Ramayana, remain evergreen in the memories of the devotees all over the world as long as the sun and the moon shine. In this Souvenir we have made a humble effort to bring out some of the thoughts of veneration, sublime emotions and love expressed by a few as a tribute to this God-Man.

This segment attempts to portray the sparkling brilliance of the ideal Guru-shishya relationship that existed between Gurudev Swami Sivanandaji Maharaj and Worshipful Swami Chidanandaji Maharaj. The master sculptor was moulding the minds of so many great ones, who later became world teachers; but one amongst them was his masterpiece. Swami Chidananda was Gurudev’s ‘gift to humanity’ as he once revealed.

This is a presentation of various felicitations and talks that were given by his guru bandhus (brother monks) and disciples of Gurudev Swami Sivanandaji Maharaj as well as contemporary devotees. They were published at various points of time in the past. Each of these articles portrays the deep sense of reverence that they had for Swamiji; and they also show that Swamiji’s enigmatic personality was a gushing stream of inspiration for many to tread the path of the razor’s edge (khurasya dhara) of inner transformation and realisation of the sublime.

This segment contains some of the talks delivered by Swamiji all over the world and the personal guidance he gave to seekers of truth, for whom he would walk the extra mile only to ensure that they grasp the teachings with absolute clarity and implement them with utmost precision. He always ‘walked the talk’; so his entire life was a message, every action was a womb of deeper thought and every moment a teaching for those who wanted to liberate themselves from wrong identification and realise ‘I am That’, none less.

He began every talk with ‘Radiant Immortal Atman!’ Never did he look down on anyone, for every being was for him the Supreme Being Satchidananda. And so he used to say, ‘Chidananda speaks to Chidananda!’

That One Eternal Light which manifested as ‘Chidananda’ lives on in a million lamps, glowing steadily in the sanctum sanctorum of every being that has come his way and it will glow endlessly. To follow in his footsteps is the fittest tribute that we can pay to him … remembering him every moment in our own way. Here are a few glimpses of how people pay their humble tribute and they reaffirm our conviction that he lives on!

Since time immemorial India has been blessed with saints, seers and sages. It is said that the masters come to show the path to the novice; but they also bask in each others’ glory and share times of unadulterated ecstasy. Every breath of theirs is a teaching for us and so they let us share such moments only to show us how to ‘be’ in the divine presence.

In the Company of Saints

Why was Swamiji always seeking the company of saints? He certainly did not need it for his own benefit or evolution. It is much more likely that for him the company of saints was like meeting a compatriot in a strange land; he can speak his own language and everything is familiar and easy. That is how saints must feel when they meet each other. They enjoy each other, laugh, joke, are silent or discuss subjects that are dear to their hearts. Not only Swamiji was keen to meet other saints; many saints came to meet Swamiji wherever he was. Divinity was meeting divinity, holiness was meeting holiness!