[With Inspiring, Philosophical Songs and Dhwanis] 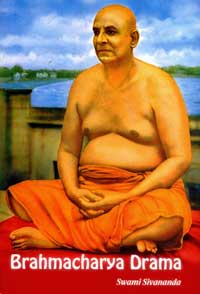 DEDICATED
TO
Sri Hanuman, Bhishma
Sadasiva Brahman, Lakshmana
and
All Brahmacharis And Brahmacharinis

O OMNISCIENT LORD! Passion is revolting. The Indriyas are turbulent. Mind is jumping like a monkey. Time is fleeting. I do not know what to do. I took Sattwic diet. I practised Pranayama. I did Japa and meditation. Yet, passion has not vanished in toto. It is suppressed. It is thinned out. But all of a sudden it bursts out again like an explosion.

O ADORABLE LORD! Without Thy grace, lust can never be perfectly annihilated. Human exertion alone cannot eradicate this evil trait. Give me strength and energy to control this mischievous imp–mind and the boisterous senses. Give me purity and light. Let me be established in physical and mental Brahmacharya. Let my mind dwell always at Thy Lotus Feet. This is my fervent prayer. Thou already knowest my heart. I cannot hide my thoughts. Thou art the Antaryami (Inner Ruler) of all and Silent Witness of all minds.

O ALL-MERCIFUL LORD! Thou art the ocean of mercy. If Thou givest me one drop, will it dry up the ocean?

I am not able to check my misbehaving senses; thinking time and again, of the pain on the way of life, I die in fright. What shall I do? What is proper now? Whither shall I go? Alas! Besides taking refuge at your lotus feet, I find not any means.

Transgressing your command, O moon-crested Lord, revered by the whole universe, I am now going about like an animal, abandoning all acts of good conduct and (utterly) unashamed; how can I, an offender of this sort, for long, through a length of varied lives, cross the sea of misery without your grace?

Surely, for the mere meekness of an anxious appeal, you, an ocean of compassion, are going to forgive, O Siva, the entire sin consequent on this mundane life; but still how could I shamelessly entreat you to do so, unable to speak as I am, openly committing every moment a thousand sins?

O, our Immanent Soul, Lord of Parvati! Even now do I offer up myself, with everything about me, at your lotus feet. I cannot grasp with my intellect your state nor go through Yogic exercises; bereft of any other course, I simply resign myself to you.

You should either forgive all my past and future sins, or discipline my mind which is prone to evil engagements. It is never proper for you, O Lord, to abandon this person who has sought your lotus feet as shelter in his poignant distress and who has thrown his entire burden on you.

“This is ready; this has been done; this has to be done now”; when will this futile activity of yours, O Mind, cease? To you, devoid of devotion to Siva, will come that time, terrific like the fall of the thundering and blazing bolt.

O Mind, you desire to enjoy only pleasures; you are endowed with discrimination and you know; (still) why do you, alas, contemplate the pleasures of the senses? Have you, by your attachment to sensual pleasures, (ever) obtained happiness, unmixed with misery? Enough; seek the Lord.

Preface To The First Edition

This Brahmacharya Drama was originally published in the book ‘Sure Ways for Success in Life and God-Realisation.’ It was staged for the first time in Villupuram on 6th April, 1940 by Sri V. S. Sundaram and his friends in aid of the Red Cross Society under the kind patronage and presence of V. N. Kudva Esq., I. C. S., District Collector, South Arcot. It was indeed a grand success. It should be enacted every year by students of all schools and colleges in India and abroad and by the general public, Institutes and temples. This book should also be introduced as a text-book in all schools and colleges. It is the onerous duty of the Headmasters and the Principals to give ethical training to the students. Character is power.

This book is completely revised and enlarged. Many suitable inspiring philosophical songs and soul-stirring Sankirtan Dhwanis are added in this book. In order to place the book within the easy reach of all students and the public, it is brought in a separate book-form. This book contains the essence of Yoga, Bhakti and Vedanta as well.

If there is no convenience for the staging of the Drama, one student can recite the whole Drama within an hour. The Drama can be enacted without the songs and Dhwanis. If you are not able to catch the right tune indicated, you can sing in your own way.

There are seven Appendices at the end. They contain a fund of important information on the subject of Brahmacharya. There are practical instructions also for the attainment of Brahmacharya. Those, who wish to learn the songs and the mode of acting, can come to Ananda Kutir for a week. I shall teach them.

Preface To The Second Edition

Philosophical teachings are brought within the reach of every average intellect in volumes and volumes of preaching, annotations, commentaries and exhaustive illustrations. No more is philosophy dreaded by the commoner even and it has now been realized by one and all that religion and spiritual culture are the most vital lessons in one’s life. Logical commentaries and proofs of the Universal Truths are only for those who have sufficient grounding in philosophy. Parables, sayings and stories are verbal narrations to youngsters so that they can easily catch the principles. But all these leave the inquirers to think for themselves. The zeal and enthusiasm in the youngsters are kindled only by demonstration of the merits of the principles.

If boys and girls are permitted to visit a social drama or film, they immediately pick up the song hits and sing them easily and enact by themselves. If the same youngsters are taken to the ‘Bhakta Tulsi Das’, they sing melodiously the tunes of Tulsi Das. The stage has a more captivating influence on the minds of youngsters and elders alike. The same contrivance which was originated for good purpose is now being misused for spoiling the character of people. Still the basic effect remains the same.

This ‘Brahmacharya Drama’ was staged in many places throughout India to give the right type of education. Very many educational institutions have staged this play and its colleague ‘Divine Life Drama’ with tremendous success and much enthusiasm. This and the ‘Divine Life’ dramas have been translated in Hindi and are being enacted at various places.

The youth organizations of the country as well as all educational authorities will not fail to take advantage of every opportunity to rouse the student population into a zealous adoption of the sublime and invigorating and regenerating message conveyed through this drama.

(A Drama In Four Acts)

Cupid, King Passion’s subordinate, causes havoc in the world with his flowery arrows by deluding men to evil walks of life. King Reason, his opponent, assisted by his officers, Brahmacharya, Discrimination etc., fights with King Passion and destroys him, his cruel ministers, companions and attendants and eventually brings Purity, Peace and Bliss to the people.

Enjoyment, Wife of Lord Cupid, hastens to her husband and puts him in the knowledge of the danger they will have to face and also of the powers and increasing influence of King Reason who is being assisted by his able officers — Brahmacharya and Discrimination. Lord Cupid comforts his wife by assuring her that she shall not in the least be perturbed by the actions of King Reason’s subordinates and that he knows how to tackle them.

King Passion’s Court: Passion enters the Council Hall and in consultation with his officers of State, decides to wage a serious war against King Reason and his cabinet.

Discrimination, the Minister of King Reason, is met at his residence by his chief officer Brahmacharya. Both have a free talk on the evils wrought by the play of Passion, Lord Cupid and others. They then resolve to destroy King Passion and his cruel ministers, root and branch. Brahmacharya then takes leave of his Minister fixing up a programme.

Brahmacharya sits in his room at his desk. While doing some work, he calls his servant Rama and enquires if any person is waiting in his drawing room, to which Rama replies that Vichara, the Prime Minister of Atman, the Lord of the universe, is waiting to have his audience. At his direction, Vichara enters in and both have a chat on the programme of destroying Passion. Vichara takes leave of Brahmacharya.

Friends and attendants of Brahmacharya meet him at his residence and acquaint him with the progress of their work and with Brahmacharya’s instructions, they prepare themselves ready for battle.

ACT IV–SCENE I
(The Adhyatmic Battlefield)

The fight ensues. The two parties fight a serious battle. There is much bloodshed on the side of the King Passion only. Anger, Greed, Moha, Pride, Hypocrisy and Jealousy are all slain. Passion also was mortally wounded. The whole race is completely subjugated. Brahmacharya comes out with flying colours along with Vichara, Reason and Discrimination.

After the battle is over, Brahmacharya meets King Reason and describes the happenings in the battlefield and also of the victory to his side. King Reason feels rejoiced at the expected news and they both leave to respond to the invitation extended by Lord Brahman.

Passion lies mortally wounded, deploring his deserted state. Just as he is fainting, his mother Maha-Maya (Illusion) comes to his succour. Passion gets comforted and nursed by his Mother Maha-Maya. They both leave to visit the court of Lord Brahman.

Lord Brahman enters the council hall and meets King Reason, Brahmacharya and other officers who have already assembled there. Maha-Maya, on Lord Brahman’s direction, brings her son Passion to his presence. Passion apologises to all those present for the wrongs done unto them by his Lila. Thereupon, Brahman blesses the whole lot with his sermon “Wherever there is Brahmacharya, there is always Goodness, Peace, Joy and Prosperity”.

Brahman – His Divine Majesty, the Silent Witness and Source for all.

Maha-Maya – The Illusory Power of Brahman.