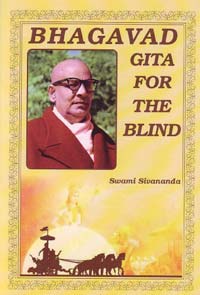 With great joy, we are bringing out second edition of ‘Bhagavad Gita for the Blind’ by Worshipful Gurudev Sri Swami Sivanandaji Maharaj. This most inspiring book, first published in 1957, contains the quintessence of Srimad Bhagavad Gita.

The Gita is a book for the blind. You will be surprised to know that the first Sloka is the utterance of a blind king. He was Dhritarashtra. He was blind and he had a hundred wicked sons. They were inimical towards his brother’s sons, the Pandavas.

In all trials, the Pandavas were victorious because they were good. God is on the side of the good. You know the inspiring motto which our Government has adopted as its: Satyameva Jayate. Truth alone triumphs. Good wins ultimately. Evil cannot exist for long. It is the Mahabharata that clearly illustrates this motto.

That is the story in short. Now let us turn to the Gita itself.

Dhritarashtra was blind. But he was blind to moral values also. That is worse. You should avoid that by all means. He knew and the wise men of his court often told him that his sons were going the wrong way. But he refused to correct them. Why? Because, he was greatly attached to them. His love for them was blind. At the beginning of the Gita, he asks Sanjaya: “My children and the Pandavas had met on the battle-field. What did they do?” Sanjaya had a supernatural vision. Sitting in the palace, he was able to see what was going on on the battlefield.

Sanjaya narrates the story. The armies of the Kauravas and Pandavas were ready to fight. The signal for the commencement of the war had been given.

Arjuna, one of the Pandavas, wanted to have a good look at both the armies. His charioteer was Lord Krishna, considered a Divine Incarnation. Krishna placed the chariot between the two armies. Arjuna saw on both sides, his own relatives and teachers. Obviously so, because it was a fight between cousins. He was blinded by misplaced sympathy. At that moment, he did not care for Dharma or Adharma. He refused to fight.

Man is distinguished from beast by the sixth sense. He has an extra-eye. It is the eye of discrimination. When one or the other of the five senses do not function, it is the sixth-sense that helps. In fact even those who have the five senses are asked to control them. All the energy that flows through them will then make the sixth sense very powerful.

Delusion blinds the eye of discrimination. Delusion is real blindness. Delusion is like madness, like the state of drunkenness. Under its influence, man does not properly considers what to do and what not to do. Arjuna was deluded for the time being. Because, he, too, like Dhritarashtra felt, “These are my people.” Delusion always begins with attachment.

Deluded Arjuna treats Krishna as an ordinary human being. He thinks that he knows everything. He thinks he is right in refusing to fight.

Delusion is weakness. Grief, disappointment, dejection, delusion–all these weaken you. If you think of it for a moment, you will readily understand what a great power this mind has got. However strong you are physically, however intelligent you are mentally, if you yield to dejection or grief or delusion, all your strength and intelligence will leave you. You will actually feel weak in body and mind. Arjuna was unable to stand. He sat down dejected. Here is a lesson. Do not yield to delusion. Never get dejected. Be always strong-willed. You can always work wonders.

The second chapter of the Gita contains its very essence. It contains a few excellent mottoes. Remembering them, you will always be happy and peaceful.

The very first advice given by Sri Krishna is grand. I will quote the words here so that you can use it as a formula for peace:

It means: “You grieve over that which should not give rise to grief.” How often this is true of you! There are so many things you are worried about. Imaginary troubles are the worst. You are afraid of the future. You are worried that you may suffer. These are the actions of a foolish man. The future is in the lap of God. The past is over. The present is in your hands. If you live this day in a divine way, your future is bound to be glorious. Banish worry with the help of this formula and be bold and cheerful.

Krishna gives various reasons for asking Arjuna not to worry. The most important one is the distinction between the immortal soul and the perishable body. This is perhaps difficult to understand at once. But it is well worth your thought. Think deeply over this truth. You had an instrument, the eye, with which you were able to see. You lost it: but you have not lost yourself with it! Similarly, this body and this mind also, are instruments only. They are not permanent. But there is something within you which uses these instruments. It exists now and uses these instruments. Even after these instruments are lost, it will continue to exist. Just as you put on your coat, come out of your room, go to another and take off your coat; that something put on this body, came into this world, and threw away this body and went into another. This change cannot be avoided. That which cannot be cured must be endured: the more cheerfully you endure it, the more happy and peaceful you will be. Therefore, as a supplement to the above motto, Krishna gives another:

The soul is immortal. The body has to perish. When you are prepared to throw away this body itself, how can you worry over something which is even less permanent? Therefore, fearlessly do your duty. Do not bother about success or failure, pain or pleasure. All these are fleeting and temporary. Therefore, always remember:

(Your privilege is to work. You have no control over the outcome.)

But do your duty you must. Never try to escape from the performance of your duty. Whether you succeed or fail in the task undertaken, perform it well. Realise that the result is not your concern. Therefore, be equanimous in success or failure, for

This equanimity is peace. This is happiness. That is what everybody wants and nobody seems to get. Why? Because you are full of various desires. You are unable to do your duty for duty’s sake. You always have some motive. You are attached to something or other in this world. When you remove all these, when you become desireless, then you will enjoy peace and bliss. Only then will you know what real peace is, what real happiness is. Because you will be equanimous in success and failure, pain and pleasure, that peace and happiness will remain permanently with you. Therefore remember:

It means: “He who is without desires and has given up attachment and egoism, attains peace.”

The word is from a Sanskrit root-word which means “to unite.” Yoga is union of the individual soul with God. God dwells in all. Therefore, Yoga amounts to our union with all. To feel and to actually realise we are one with all–this is the goal. Please remember this.

The Yoga that is taught in the Bhagavad Gita is highly practical. It is universal. It is eternal. It applies to all at all times. It is based on another fundamental principle of creation. Everything that has life grows; there is movement, action and growth. In the words of the Gita: “You cannot remain idle for a moment.” Even if you are sitting quiet, you are breathing, you are thinking. To make all this help you to attain the goal is Yoga. The eighteen chapters of the Gita tell you how to do this.

The world has been created and is maintained on some laws. For instance, you will readily understand that the law of love and co-operation operates everywhere. There is inter-dependence everywhere. Man feeds cows, for instance; and the cows provide man’s food. This is true of everything here. There is such inter-dependence between man and animal, between man and plants, between animals and plants.

If you remember these three, you know the Yoga of the Gita:

1. God pervades all beings.
2. All things in the world are interdependent.
3. You cannot help being constantly active.

You have to attain union with God who pervades everything. So, you have to serve everything. Serve–not with the idea of getting something in return. That will only strengthen the idea of difference. Your aim is to feel that you are one with all. Elsewhere, we have a beautiful description of God. The sun, the moon, man, animals, plants,–all these are said to be different parts of the body of God. That idea will help you feel your oneness with everything. When a thorn enters your foot, your hand automatically goes there to remove the thorn. Does it demand a fee? Does the hand ask for certificate? That should be your attitude when you serve others. That is real selfless service. It is that which will enable you to realise your unity with everything. That you know, is the goal. Such service is called Yajna, sacrifice. What is sacrificed in this? Selfishness is sacrificed. Egoism is sacrificed. The idea that “I am different from others” is sacrificed.

The main obstacle to such service is desire. When you want something for yourself, you will not serve others unselfishly. Desire will only make you feel that you are different from others. Therefore, become desireless. Desirelessness will give you peace. You will enjoy great happiness if you become desireless.

Man’s will is weak. You are unable to practise what you know is good. Something which you cannot explain seems to compel you to do wrong. This is what in our philosophical books is called Maya. It is undivine. It is evil.

So, people gradually become less righteous. Evil seems to grow in the world. Man becomes selfish. No one wants to serve. Selfishness makes man fight with another man. Vices grow. Virtue declines. The Lord gives us a grand assurance here: “Whenever virtue declines and vice grows, I descend on earth to re-establish righteousness.” God comes into the world in several forms. He protects the good. He destroys evil. Once again, spiritual values gain a place over material values. Once again, man feels it is better to serve and suffer than to enjoy at another’s expense.

Right knowledge of this Yoga is essential. Your Guru will be able to prescribe exactly what you should do to reach the goal. He will enable you to know God. Knowledge of the Omnipresent of God will make your whole life divine. All your actions will become Yoga.