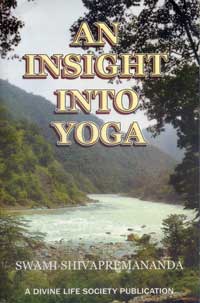 Swami Shivapremananda was born in India on 26th July, 1925. After his studies at the St. Xavier’s College in Calcutta [now Kolkata] University, he chose the vocation of spiritual ministry in 1945 and entered the Ashram [The Divine Life Society] of Swami Sivananda in Rishikesh at the foothills of the Himalayas, where he stayed till 1961.

He studied various branches of yoga, comparative religions and philosophies while at the Ashram. He was the editor of The Divine Life and Wisdom Light monthly magazines besides a few other publications published from there. He was a trustee of The Divine Life Trust Society.

In 1961, urged by Swami Sivananda, he went to Europe and the U.S.A. to share his knowledge. He has since lived in the U.S.A., Europe and South America and founded and guided yoga centres in many countries.

At present, Swamiji is the president and rector of the Sivananda Yoga Vedanta Centres in Buenos Aires [Argentina], Montevideo [Uruguay] and Santiago [Chile].

Swamiji is the author of eleven books on yoga, philosophy and psychology in Spanish. His book in English, Yoga for Stress Relief, has been translated and published in six other European languages. He has lectured in many universities of Europe and America.

The book An Insight into Yoga is authored by H.H. Revered Sri Swami Shivapremanandaji who has his field of activity in Yoga (theory as well as practical classes) and philosophical lecturing in three South American capital cities, namely, Buenos Aires in Argentina, and Montevideo in Uruguay, both on the South American east coast, and the third in Santiago de Chile, the capital city of the country, on the west coast. He has been doing this Yoga-Vedanta work for over the past 43 years since the year 1962. His work has immensely benefited thousands of earnest seekers who are eager to acquire the knowledge of the science of Yoga as well as its philosophy, both theory and practice. Yoga and Vedanta are highly venerated, since they are regarded as a priceless and precious spiritual gift given to the modern world by ancient India’s great Yoga adepts and philosophers of a long bygone and hoary era.

The contents of the book cover a wide-range of the area of knowledge, dealing with more than 115 topics. In its encyclopaedic all-comprehensiveness the book is a mini-library in itself.

I wish this work the widest possible circulation so that it brings immense benefit to the reading public.

May the Divine Grace of God and the sacred benedictions of Holy Master, the late H.H. Sri Swami Sivanandaji Maharaj be upon this book in their abundance! My fullest blessings are upon this book as well as its readers.

An Insight into Yoga is a collection of interrelated articles which formed the basis of my courses on the various aspects of yoga and other related philosophical and psychological subjects. They were given at seminars held in Britain and Ireland, and New York, Antwerp, Buenos Aires, Montevideo and Santiago de Chile, from 1962 to 2004.

Chapter I deals with philosophical enquiries as to the search for truth, the spirit of yoga without being in conflict with religion, and the definition of a yogi and a guru. Chapter II speaks on the philosophy and practice of Gyana Yoga or Vedanta, in the light of the teachings of the Upanishads. Chapter III covers the first steps in Raja Yoga, such as the ethical values of yama and niyama. Chapter IV extensively treats of the theory and practice of meditation. Chapter V discusses the nature of the mind and its control through self-education, and various criteria for inner balance. Chapter VI gives some thoughts to ponder, and Chapter VII some resolves to make. Chapter VIII speaks on chants. Chapter IX deals on knowledge through enquiry and Chapter X covers the subject of criterion and inner balance. Chapter XI gives some guiding values of peace and liberty. Chapter XII is on the meaning of culture. Chapter XIII is on the problems of human nature. Chapter XIV is on the Buddha’s teachings. Chapter XV deals on Yoga and Christianity. Chapter XVI is on yoga, God and religion. Chapter XVII is on the three gunas or qualities of nature. Chapter XVIII ruminates on many themes in two parts. Chapter XIX is on the six systems of Indian philosophy. Chapter XX presents some thoughts for the month. Chapter XXI relates some anecdotes in two parts.

The Appendix is divided into several parts: the first on the detailed explanation of the Gayatri mantra, the second on two interviews with me by Jane Sill, the present editor of the Yoga and Health monthly magazine, published in the United Kingdom, and the second being by her predecessor, the late Ronald Hutchinson, when it was called Yoga Today. I consider both of them personal friends sharing similar ideals. There is a transcription of a tape on meditation conducted by me at a seminar in England, and of a lecture on stress management given in London. Following these, there is an article on Yoga in Argentina by Ana Hosmann de Sarasin and by three other authors. The article on How I Came to Yoga by Renate Rikke Gradenwitz speaks on the same subject. Yoga in Uruguay is described by Mario Caffera, Humberto Cairoli, Sofia Aguiar and Olga Gutierrez. The main article on Yoga in Chile is written by the late Anita Palma, which is followed by those of Hector Calderon and Lucila Broughton. An encyclical of Pope John-Paul II, under the title Know Thyself, makes a beautiful presentation of the spirit of Christianity and religion as such, and respect for other cultural traditions.

The concluding part of the Appendix describes the formation of the Sivananda Yoga-Vedanta Centres in Buenos Aires, Montevideo and Santiago de Chile by different authors, some of them being quite nostalgic, and two of them having passed away, Ulrich Hartschuh and Anita Palma.

The reiteration of some of the themes could not be avoided, as they were needed under different contexts.

I wish to express my gratitude to H.H. Revered Sri Swami Chidanandaji Maharaj for writing a Foreword to this book. His blessings are always very precious to me as the seniormost living Gurubhai and as I have known him to be the closest disciple of Gurudev H.H. Sri Swami Sivanandaji Maharaj.

I also wish to give my grateful thanks to Sri Kaviraj Nayak for his editorial and proof-reading assistance, and to Sri Swami Narasimhuluji for the final revision of the book.

Swami Shivapremananda was born in India on 26 July, 1925. He studied at St. Paul’s Collegiate School in Darjeeling, and subsequently at the St. Xavier’s College in Calcutta (now Kolkota) University. In 1945 he chose the vocation of spiritual ministry and entered the Ashram (Divine Life Society) of Swami Sivananda in Rishikesh at the foothills of the Himalayas.

He studied there various branches of yoga and comparative religions and philosophies. From 1949 to 1961, he taught at the Yoga-Vedanta Academy, and was the editor of The Divine Life and Wisdom Light monthly magazines and other philosophical publications. During this period he was also a private secretary to Swami Sivananda and a trustee of the Divine Life Society.

Swami Shivapremananda took part in social work for the poor under the auspices of the Sivananda Eye Relief Camps, in 1957-58, in Sourashtra. His interest in Eastern mysticism drew him to some monasteries in the Himalayas and Tibet in the 1950s and later to Thailand, Cambodia and Japan. Swamiji stayed with Gurudev Swami Sivananda for 16 years and eight months.

In 1961, invited by educational and cultural groups and urged by Swami Sivananda, he went to Europe and the USA to share his knowledge and experience gathered in the course of many years. He has since lived in the USA, Europe and South America, and founded and guided yoga centres in many countries.

At present Swamiji is the president and rector of the Sivananda Yoga-Vedanta Centres in Buenos Aires (Argentina), Montevideo (Uruguay) and Santiago (Chile), which are the largest and most prestigious organisations of their kind in these countries, built up over the years since their inception under his guidance.

Swami Shivapremananda goes to Europe periodically to give seminars at various places, mainly in Great Britain and also in Belgium and Ireland, having done so in Holland, France, Germany, Switzerland and Italy. He is also well known as a teacher of Hatha Yoga, and conducted spiritual retreats in many countries, his inclination, however, being basically to Gyana Yoga and Raja Yoga.

To promote a greater understanding of the spiritual teachings of the East through Western interpretation, Swamiji has given lectures in many universities in the USA, such as Columbia in New York, Wisconsin in Milwaukee, Stanford near San Francisco, the East-West Cultural Centre in Los Angeles, St. Mary’s Seminary in Baltimore, and the American Academy of Asian Studies in San Francisco.

He has also lectured in the universities of Oxford, Stuttgart and Antwerp and other educational institutions in Europe. Invited by the late Thomas Merton, he twice visited the Trappist monastery in Gethsemane in Kentucky in the early 1960s.

His book Yoga for Stress Relief, published in 1999 and 2000 by Gaia Books, England, and Random House, USA, has been translated from the original English and published in six other European languages.