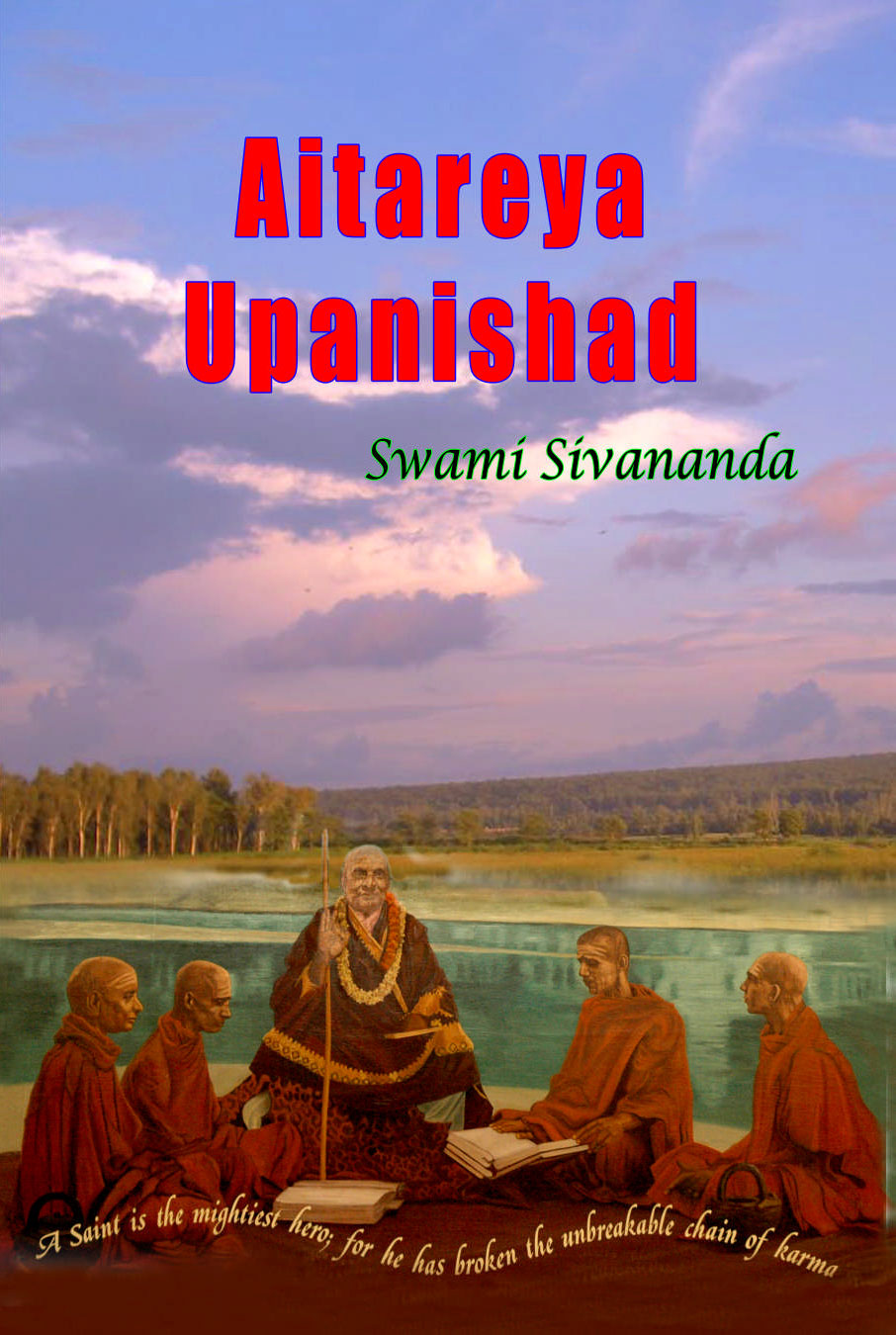 There is no book in the whole world that is so thrilling, soul-stirring and inspiring as the Upanishad.

The philosophy taught by the Upanishads has been the source of solace for many both in the East and the West.

The Upanishads teach the philosophy of absolute unity. They contain the sublime truths of Vedanta and practical hints and clues which throw much light on the pathway of Self-realisation.

The greatness and the sublimity of the Upanishads are well known to all the students of philosophy. There have been attempts to approach the books through various standpoints. Much has been written over the knotty problems of interpretation, by the Eastern and Western scholars. And yet the lay reader has not understood the central teachings fully well. Gurudev Sri Swami Sivanandaji Maharaj, in his comprehensive volume ‘The Principal Upanishads’ has given exhaustive commentary on Nine Upanishads and stressed such points clearly and truly, explaining the abstruse ideas in his own inimitable style, thus laying bare the sacred doctrine not only before the eligible pupil but also the lay reader.

For the convenience of the readers, we are bringing out each Upanishad in a separate book. The present volume contains the text, translation, notes and commentary on Aitareya Upanishad.

May the abundant blessings of Gurudev Sri Swami Sivanandaji Maharaj be upon all the readers.

Please take note that the print edition does not have the transliteration.

Hari Om! The philosophy taught by the Upanishads has been the source of solace to thousands of people, and even to men in the West like Schopenhaur. It is extremely difficult to translate the Upanishads into English. The charm, force and beauty will disappear in translation.

The final emancipation consists in being centred in Brahman, which is bliss and joy, after eradicating ignorance, which is the cause of desire and Karma. Ignorance is dispelled by knowledge of Brahman.

It is well established in all the Upanishads, that the end attained by the realisation of the unity of Self, is immortality.

The central teaching of this Upanishad is the unity of the Atman with Paramatman. This must be realised through knowledge of the Self and not by rituals. Atma-Jnana alone can burn the seeds of Samsara and bestow Moksha.

The knowledge of Brahman should be taught to those who have purified their hearts, by performing the Karmas enjoined in the scriptures, who are therefore fit to receive instructions, who are well versed in Sastras, who possess faith, who are centred in Brahman, and who have duly practised the vow of Sirovratam. Sirovratam is the well-known Vedic vow mentioned in the Atharvana Veda. This obviously means the head-vow, Sannyasa, renunciation. This is the ceremony in which the head is shaven.

One should enter the fourth order of life, as it is difficult to practise Brahma-vidya without absolute renunciation. Sri Sankara agrees that a householder is not disqualified for study and practice of Vedanta. But, according to him Sannyasa is necessary for attaining Self-realisation. A Sannyasin only is a wholetimed aspirant. He can devote the whole time in study and meditation. He can find adequate leisure and freedom from the distractions only in Sannyasa. Hence, renunciation is desirable even to those who have not attained Jnana. “Avidusha-mapi mumukshuna parivrajyam kartavyameva–even one who is not a knower, but who is desirous of attaining liberation, should enter the order of a Sannyasin.”

He further adds, with emphasis, that the practice of meditation on the Self cannot be pursued with intense vigour and devotion without relinquishing the concern of life. He says: “The control of the external and the internal activities of the senses, and other aids to the realisation of the Atman are incompatible with other orders of life”.

In the Kaivalya Upanishad, we find, ‘Not by Karma, not by offspring, not by wealth, but by renunciation alone can men attain immortality’. Smritis also say, ‘Let one live in that order of life which is a means to the knowledge of Brahman’. In this Ashrama only, Brahmacharya and other helps to knowledge can all co-exist, and these are impossible in a householder’s life.

The Srutis say: “Let one leave home for the forest and turn as a Sannyasin, or otherwise even from the order of a bachelor, either from home or from the forest let him turn as a Sannyasin”. The order of Sannyasin is enjoined even on one in the householder’s order, as an indirect aid to the realisation of the Atman. This voluntary renunciation while yet a neophyte, will qualify the aspirant for Vedantic study. The Sruti also says: “Yadahareva virajet tadahareva pravrajet–one should leave the house the very day dispassion dawns in him”.

The Sannyasin is free from all sorts of worldly distractions, ties and attachments. The garb puts a check on the aspirant from going astray or doing evil actions. When there is internal change, when one is ready for entering the fourth Ashrama of life, why should he be afraid of putting on the orange-coloured robe? Why should he say, I have given colouring to my heart? It is a sort of timidity and hypocrisy. Vasanas (subtle desires) still lurk in his heart. Why did Yajnavalkya, Sri Sankara, Ramakrishna Paramahamsa take Sannyasa?

Sannyasa has got its own glory and advantages. The freedom of a Sannyasin can hardly be described. A Sannyasin only can entirely cut off all connections and ties. Though you have coloured your heart, still all members of your family will cling to you like a leech till the end of life. They cannot understand your changed mental state. You cannot entirely eradicate Moha (infatuated love) and attachment for your family. When you fall sick, you will be tempted to go for their help and vice versa. The old Samskaras will get new life, and Moha will bind you with stronger chains once again. It is only when you take Sannyasa that they will leave you free. They will leave all hopes on you. Then only you become dead for them. They will not approach you again.

If you like seclusion, if you are free from Raga or passion, worldly ambition, Karmic tendencies and attractions of this world, if you are reticent and serene, if you have disciplined yourself while remaining in the world, if you can live on simple food, if you can lead a hard life, if you have a strong constitution, if you are not talkative, if you can remain alone without company and talk, if you have a meditative temperament or reflective nature, if you can bear all the difficulties in the spiritual path, if you can lead the life of an ascetic till the end of your life, you can take to the path of renunciation. Then only you will be benefited by embracing Sannyasa. You should actually lead the life of a Sannyasin for one or two years in the world itself. You should prepare yourself first in the world itself. Otherwise, you will find it extremely difficult to tread the path. For a man of dispassion, discrimination and strong will, this path is all joy and bliss.

1. In the beginning, (all) this was verily the Atman alone. There was nothing else active. (Nothing else whatsoever living existed. There was no other thing that winked at all.) He thought: ‘(Now) verily I shall create the worlds.’

Atman is the first principle or the first cause. It is the only reality. It is from the root which means ‘to obtain’, ‘to eat’, ‘to enjoy’ or ‘to pervade all’. The Atman is the highest, all wise, all powerful, free from all characteristics of Samsara, such as hunger, delusion, sorrow, etc. He is eternal, pure, intelligent and free. He is birthless, undecaying, ageless, immortal, fearless and secondless.

Idam: the universe, which has been described in Purva Khanda, as being differentiated by name, form and Karma, was the one Atman, alone at first, i.e., before creation.

Agre–before the creation of the universe. In the beginning, before the creation started, there was nothing save the Atman. In reality, there is no such thing as creation. It is only a projection of what lies in a potential state in the Avyakta, or the unmanifested, at the beginning of a new cycle. Is He not now the same, the one entity? Is there something else beside Him? No. Why then is it said ‘He was’? How is it that the past tense ‘existed’ is used? Though even now, He alone exists, there is a difference.

Nanyatkinchana–nothing else. Mishat–active, winking, living. No other operating entity save the Atman, existed like the Pradhana of the Sankhyas, independent and material, or like the atoms, apart from Isvara, of the followers of the school of Kanada. In the Vedanta, no entity independent of the Atman is admitted to exist. There was the Atman alone. This is the import of the text. Maya cannot function by itself. It has no independent existence. Therefore, the Atman is secondless, and the world has a mere relative existence, as it existed only as the Atman before its creation.

What was His object or purpose in creating the worlds? The answer is: ‘I shall create the worlds, named Ambhah, etc., the regions, for the enjoyment of the results of Karma, by living beings.’