This biography is from the book "Lives of Saints". 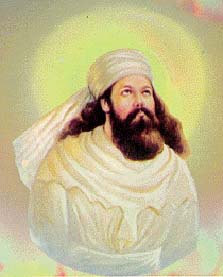 There is no certainty at all about the age in which Zoroaster lived. Some say that Zoroaster lived about 6000 B.C. Others maintain that he flourished in the middle of the seventh century B.C.

Zoroaster was the greatest prophet among the ancient Iranians. He took his birth in order to establish the worship of Ahura Mazda, the Supreme Lord of the Universe and to fulfil the Divine Mission. His own original writings, the precious Gathas in the Avestan language, indicate that he was a God-intoxicated person.

Zoroaster’s father was the venerable Porushaspo and his mother Dughdhvo. Zoroaster was born in the west of Iran in Takht-e-Suleman in the district of Azerbaijan. He was a direct descendant in the royal line of the house of Manushcihar, the ancient King of Iran.

The Prophet of Iran is known to his followers as Zarathustra. (Possessor of yellow or old camels. ‘Ustra’ means camels.)

When the Prophet of Iran was born, nature rejoiced. The trees, rivers and flowers expressed their joy and delight. The demons were frightened. As soon as the child was born, he did not cry like an ordinary mortal. He made a loud laughter. Many angels and archangels came to adore him.

The birth of Zoroaster was miraculous. The glory of Ahura Mazda descended from heaven and entered the house of the future mother of the prophet. When she was pregnant, archangels came to her and worshipped and praised the unborn child.

Zoroaster married three times and had many children. His first wife had one son and three daughters. The youngest daughter Pourucista married Jamaspa, who was the uncle of Zoroaster’s third wife. Zoroaster had two sons by his second wife.

We know very little of the early life of Zoroaster. Even when he was a boy, he showed great wisdom. He argued with wise men and censured the heretics.

Demons and evil spirits tried to kill him. The Turanian King Durasrobo also tried to kill the child, but the life of the prophet was miraculously saved by the all-merciful Lord.

Zoroaster developed dispassion when he attained the age of sixteen. The objects of the world lost all attraction for him. He despised all mundane pleasures. He rose above all sensual cravings. He showed intense love and compassion for all living beings

Zoroaster left his home at the age of twenty and wandered from place to place. He led a life of purity and righteousness. He roamed about in forests. He lived alone in caves and mountain-tops. He controlled his tongue and subjugated his other senses also. He was very abstemious in his diet. He spent his time in calm meditation.

Zoroaster experienced Samadhi or communion with Ahura Mazda, the Supreme Lord of the Universe, on the top of Mount Sabatam. He had prophetic divine visions. He conversed directly with Ahura Mazda and received the wisdom of the Lord. He received seven revelations from Ahura Mazda. At the age of thirty, he came out as the Prophet of God. After receiving the divine light of revelation, he became the renowned messenger of Ahura Mazda.

Vohumanah is the archangel of good thought. He is also the presiding Lord of domestic animals. He appeared before Zoroaster and helped him to cast off the physical sheath and directed his soul to the supreme abode of Ahura Mazda. Ahura Mazda Himself gave instructions to the Prophet and imparted divine wisdom to him. Zoroaster obeyed the commands of Ahura Mazda.

When Zoroaster was coming down from the celestial abode of Ahura Mazda, he was terribly attacked by the evil force Ahriman, the Satan of Zoroastrianism. Ahriman wanted to kill Zoroaster, but Zoroaster’s spiritual powers saved him. The Prophet became the master of all demons after conquering Ahriman. He began to preach again.

Zoroaster experienced a second vision. The same archangel asked the prophet to take great care of the animals and to protect them.

Then Zoroaster conversed in his third vision with Asha Vahishta, the archangel of righteousness who is the presiding Lord of sacred fires. The archangel commanded Zoroaster to protect the sacred fire and all fires.

Zoroaster had a perfect knowledge of the celestial hierarchy of gods through these visions. Zend Avesta, which is the Bible and the Gita of the Parsis, contains the wisdom which the Prophet received from Ahura Mazda, the Supreme Lord.

Zoroaster travelled from place to place. He went to India and China, but no one received his message in the beginning. He first converted his own cousin Maidhyoi-madnha. This disciple remained faithful to Zoroaster till the end of his life.

The Kavis and the Karpans, the learned priests of the courts, poisoned the ears of Vishtasp, the Sovereign of Iran. They intrigued against the Prophet and accused him before the king of being a sorcerer. They persuaded the king to put him in prison to die of starvation. Zoroaster remained in the prison for sometime and was saved by the Lord.

The favourite black horse of the king fell ill. Its four legs were drawn up into its belly. Zoroaster sent word to the king that he would cure the horse. He imposed four conditions, which the king readily accepted. Vishtasp had to accept the new faith. He had to consent that his son Isfendiar would defend the new faith. Zoroaster was to be allowed to convert Queen Hutaosa. The king had to reveal the names of all those who had plotted against Zoroaster and punish them. When each leg of the horse came out, each of the four conditions was granted by the king.

The king, in turn, demanded that four conditions of his should be accepted by Zoroaster. First, the king wanted to know his final destiny and his place in heaven; second, he wanted that his body might become invulnerable; third, he desired that he might have universal knowledge; and lastly, the king wished that his soul might not leave his body until the resurrection. Three archangels appeared before the king and the queen and dazzled their eyes. The king and the queen trembled at their sight. They heard the voice from the light which said that they had come at the command of the Lord to show the king and the queen the glory of the religion of Zoroaster.

King Vishtasp was convinced. He was also convinced of the supernatural powers of the Prophet. He fell at the feet of Zoroaster, accepted his creed and worshipped him as the Prophet of Iran. He experienced a glimpse of heaven. The archangel Ashavahishta gave the king nectar to drink. The queen and other chieftains, and also the brother of the king, and Frashaoshtra, the father-in-law of Zoroaster, became devoted followers of Zoroastrianism. The new faith spread far and wide with the help of the royal patron. The masses also accepted the new faith. Zoroastrianism became the religion of the Iranian Kingdom.

The success of the new religion became the cause for two bitter religious wars between Iran and Turan. Zarir, the brother of King Vishtasp and the king himself defeated the enemies. Zarir played a wonderful part. He was a formidable hero in the war. His gallantry was beyond description. But he was treacherously slain by a poisoned spear hurled from behind by Vidrasfsh. Aryasp, the Turanian king, promised to give his daughter in marriage to Vidrasfsh for doing this horrible, ignominious act.

Bastwar, the young son of Zarir, a mighty hero, who might be called a Maharatha, who was equal in strength to Bhishma, killed Vidrasfsh and defeated Aryasp.

King Aryasp again invaded Iran eighteen years after his defeat. He destroyed the temples, killed the priests and burnt the Zend Avesta. In the second war, the hero was Ispendiar, the son of King Vishtasp. He defeated Aryasp, drove him out of Iran and killed him.

The Prophet of Iran was praying before the altar in the temple of Nush-Adar with a rosary in his hand. A Turanian, Bratrok-resh by name, killed the prophet with his sword.

Zoroaster threw his rosary at Bratrok-resh. A fire proceeded from the rosary. It fell on Bratrok-resh and destroyed him. Zoroaster died at the age of seventy-seven. Thus the glorious Prophet of Iran, the great messenger of Ahura Mazda and the founder of Zoroastrianism or the religion of Mazda-worship passed away.

Zoroaster did many miracles. He carried out the behests of the angels. He protected the fires and the cattle. He healed the sick and restored the sight of a blind man. He had a great reputation as a scholar and physician. He established many fire-temples. He spread the new faith all over the country. He suppressed the worship of demons, witchcraft and sorcery. He drove pestilence and removed national calamities and disasters. He cured diseases, counteracted the noxious creatures and brought abundant rain on earth.

Zoroaster was pious, noble and compassionate. His message was the noble message of high moral life which paves the way for the attainment of immortality and eternal bliss and the doctrine of the God of Righteousness or Ahura Mazda. "Love the righteous. Have compassion for the distressed."—These constitute Zoroaster’s main ethical teachings.