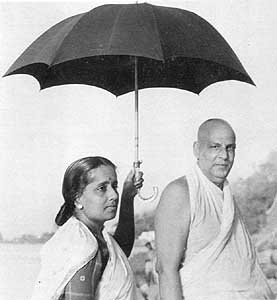 Born on the 18th of April 1914, in an orthodox and pious family of Perur, in Travancore (Kerala) State, she was known as Chellamma. She passed her Senior Cambridge examination privately and then had her Inter and M.B., B.S., combined course of 7 years at the Lady Hardinge College, Delhi. She was one of the brightest students and had won many prizes and medals.

In 1942 she was appointed as Asst. Surgeon in the Govt. Opthalmic Hospital, Madras. Being very efficient, she got quick promotions and became the Civil Surgeon at the same hospital. In 1951 she resigned her job and took to private practice.

She happened to buy a second-hand book of Swami Sivananda at the Moore Market, Madras, and when she saw the photo of the Swami in the book, she instantaneously felt that she had known him, intimately. That book possessed her and the same evening she had a vision of Swami Sivananda in her meditation, blessing her. Since then an inner transformation was taking place in her in spite of herself.

In April 1955, she came on a short visit to Rishikesh, to have Darshan of Swami Sivananda. But Sivananda played the miracle. He asked her to do some service in the hospital and when the day of her return to Madras came she decided to stay on, for ever, at Rishikesh. On the holy Guru Purnima day in 1956, she was initiated into the sacred order of Sannyasa and given the name Swami Sivananda-Hridayananda.

Swami Hridayananda being an eye specialist, Sri Gurudev asked her to start a regular Eye Hospital for the benefit of everyone, as the Sivananda Charitable Hospital that was serving the people then was not a systematic hospital. Simultaneously it so happened that one Capt. Srivatsava, who was also a great devotee of Sri Gurudev, became responsible for a substantial contribution by way of donation for the construction of an Eye Hospital, which became an added incentive to step up the work. Under the instruction of Sri Gurudev himself the work of building a regular Eye Hospital commenced and progressed by leaps and bounds. Swami Hridayananda became the Medical Officer of this service wing of the Ashram and within a few years she established such a name as an expert physician and surgeon that the reputation of the expert handling of cases in the hospital reached the ears of the officials of the Government in the State and the Centre, who were eager to assist our hospital by grants given by the Government.

Swami Hridayananda was very personally associated with Sri Gurudev not only as a Medical Officer but as a personal assistant and personal physician. In addition to her medical career, she was also an ardent spiritual seeker who wrote articles, essays and even books on Sri Gurudev which was an expression of her aspiration and devotion to Sri Gurudev. She became very famous as a spiritual guide to many people and seekers who came to the Ashram and a very able physician and surgeon at the same time. This fame of Swami Hridayananda Mataji as a spiritual guide particularly brought her request from various parts of the country and even abroad. Invitations came from different places and one of them was from our revered Sri Swami Sahajanandaji Maharaj of Durban, South Africa, which invitation she accepted and went to South Africa. From South Africa she toured different parts of Europe and America, where she conducted extensive series of lectures and established certain centres for spiritual guidance. Finally she is now settled in Europe (France, Belgium and Holland), which is a delight and great satisfaction to seekers in those parts.