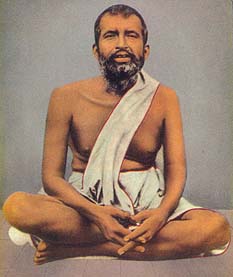 On 18 February, 1836, a child was born at Kamarpukur near Calcutta, in Bengal. This divine child was destined to return to Hinduism the glory it had enjoyed before the foreign conquest of India.

The child was named Gadadhar. He later grew to become Sri Ramakrishna, who was described by Romain Rolland as “the perfection of two thousand years of the spiritual life of three hundred million people”.

As a child, Sri Ramakrishna showed wonderful qualities of purity and love. He loved the company of Sadhus. When he was nineteen, his elder brother, Ramkumar, appointed him priest of the Kali temple at Dakshineshwar. It was the duty of the young priest to dress and decorate the image of the Divine Mother, Kali. His love for the Mother began to grow beyond all bounds. To him, She alone was real and the world became a mere shadow. He poured his soul into his daily worship, and longed to obtain a vision of the Mother of the universe.

Sometimes, in agony he would rub his face against the ground and weep bitterly. Such was his longing to obtain Her vision. He reached a point when his agony was so great that life held no more meaning for him. It was then that he had his first vision of the Divine Mother. Thereafter, he would see the form of the Divine Mother often and get Her instructions and guidance.

Sri Ramakrishna was initiated into Vedantic meditation by Totapuri, a reputed monk who attained oneness with God after forty years of penance. Such was the devotion of Sri Ramakrishna that, to the amazement of his Guru, he attained in one day, what the Guru took forty years to achieve! In his very first sitting, he remained absorbed in the state of Samadhi or God-vision for three days!

Sri Ramakrishna was unique in every respect. He explored each of the world’s great religions and found that he could have the vision of God by following any one of their paths. He could neither read nor write, yet he soon knew the basic teachings of all the sects of Hinduism.

When a Sufi taught him about Islam, Sri Ramakrishna lived the life of a devout Muslim and soon had the vision of Prophet Mohammed. Not long afterwards, he was attracted to the life and teachings of Jesus Christ. Soon he had the vision of Jesus also, and another of Mother Mary and the holy child. In the same manner he had a vision of Lord Buddha.

When Sri Ramakrishna was twenty-three, he selected as his bride, Sarada Devi, who was then five years old. But the couple never led a householder’s life. The marvellous girl, who was herself a great soul, later became the Holy Mother, showering her Grace and blessings on the thousands who eagerly flocked to her for solace and comfort.

Sri Ramakrishna taught the world that God can be realised through all religions. This great truth came to him through his direct spiritual experience.

A great part of Sri Ramakrishna’s life was spent in training his disciples, among whom Swami Vivekananda stood foremost. Swami Brahmananda, Swami Shivananda and Swami Saradananda were some of his other well-known disciples who expanded and spread his mission far and wide.

Sri Ramakrishna’s teachings are given in a great work entitled, The Gospel of Sri Ramakrishna. It consists of his daily talks recorded by one of his very faithful disciples, Mahendra Nath Gupta. It is a marvellous book giving us the teachings of the great Master in a simple, lucid form.

Sri Ramakrishna left his physical body in the year 1886, after suffering for some time from throat cancer. His teachings, given by means of many stories and parables, are today read by almost every spiritual aspirant treading the path of Yoga. His spiritual impact on India and the world has been tremendous.

Mahatma Gandhiji said in a tribute to this great soul: “The story of Sri Ramakrishna’s life is a story of religion in practice. His life enables us to see God face to face. Sri Ramakrishna was a living image of Godliness. His sayings are not those of a mere learned man but they are pages taken from the book of life.”

Sri Ramakrishna’s biography has been reproduced from Swami Sivananda’s
“Yoga Lessons for Children (Vol. 7)”, published by the Divine Life Society of South Africa.