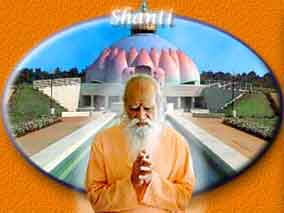 Ramaswamy, as he was named by his parents, was born on the 22nd December, 1914, as the second son of a very devout couple Sri Kalyanasundaram and Smt. Velammai, at Chettipalayam, Tamilnadu. After pursuing a highly successful business career, he gave up worldly life on the death of his wife. He visited many sacred places of pilgrimage, stayed in Ashrams with holy saints like Sadhu Swamigal, Sri Aurobindo, Swami Chidbhavananda and Sri Ramana Maharshi, and finally arrived at Rishikesh in 1949 and met Swami Sivanandaji Maharaj upon which he felt he has reached his final destination and his Guru. He was initiated into the holy order of Sannyasa by Swami Sivananda giving him the monastic name of Swami Satchidananda, on the 10th of July, 1949. In February, 1951, Sri Gurudev asked him to undertake an All-India Tour, during which he gave lectures, taught Yoga Asanas and organised Branches of the Divine Life Society.

Knowing his ability in the work of management and also proficiency especially in Hatha Yoga, Swami Satchidananda was asked by Sri Gurudev to go to Ceylon, now known as Sri Lanka, to build up a centre of the Divine Life Society, in response to an ardent request by a lady called Swamy Satchidananda Mata. She was a very devoted lady and considered Gurudev as God himself. But she had not the ability to maintain the Centre being a lady herself and not very much acquainted with the knowledge of the Sastras, much less of Yoga. So Swami Satchidananda’s going there was a God-sent, and he actually fulfilled this pious wish of Sri Gurudev. Having seen that the Centres in Sri Lanka are raised to the status expected by Sri Gurudev, he moved further to the West until he established himself in the United States of America where he has his Yoga capital in Buckingham, Virginia.

This Swami has also veritably worked a miracle in the West, and in one of the movies that he has produced he has portrayed the difficulties which he had to face in doing any good at all to people there as also the achievements which were to his credit by the grace of Sri Gurudev; because materialism, atheism and total non-acquaintance with the higher values of life etc., etc., were some of the negative sides which he had to face in Western youth especially, all which he handled very dexterously with his calm, quiet and poised nature, speaking slowly, powerfully, cogently and touchingly whatever be the disciples, students and enquirers that came to him for guidance. Today he has a vast Ashram with a land extended to some hundreds of acres where he has recently built a temple of all faiths, called the LOTUS (Light of Truth Universal Shrine), which is the work of several years of many people’s cooperation and thinking under his guidance. The construction of this was completed recently and inauguration of it was done in July 1986 in a most grand manner attended by many dignitaries both in the West as well as in the East. Swami Satchidananda is also a staunch devotee of Sri Gurudev though he stands by himself, on his own legs, in reputation as well as material security. He is one of the stalwarts who succeeded to the point of perfection in carrying the message of Sri Gurudev, in the West.