This biography is from Swami Sivanandaji's book "Lives of Saints". 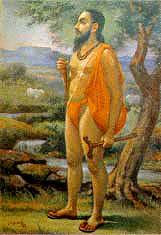 Ramdas was one of the greatest saints of the world. He was the inspirer of Shivaji. He was born of Suryaji Panth and Renuka Bai in Jamb, Maharashtra, in 1608 A.D. His original name was Narain.

Ramdas was a contemporary of Sant Tukaram. He was a great devotee of Hanuman and Lord Rama. He had Darshan of Lord Rama even when he was a boy. Lord Rama Himself initiated him.

As a boy, Ramdas acquired some knowledge of the Hindu scriptures and developed a liking for meditation and religious study. One day he shut himself in a room and began to meditate on God. When his mother asked him what he was doing, Ramdas replied that he was meditating and praying for the good of the world. His mother was surprised at the precocious religious inclination of the boy and felt happy.

When Ramdas was twelve years of age, all arrangements were made for his marriage. He sat in front of the bride. There was a screen between the bridegroom and the bride. When the priests chanted "Sawadhan!' (be alert), Ramdas bolted away from the place and disappeared within the twinkling of an eye.

For twelve years Ramdas stayed at Nasik on the banks of the Godavari. He used to get up very early in the morning, go into the Godavari river, and with his body half-immersed in water, recite the sacred Gayatri Mantra till about noon. Then he would go round for alms. He first offered the collected food to his Deity Sri Rama and then took it as Prasad. After resting a while, he used to attend religious discourses in the various temples of Nasik and Panchavati. Ramdas also studied Sanskrit and copied in his own hand the Ramayana of Valmiki. This manuscript is still preserved in the collection of Sri S.S. Dev of Dhubliah.

Ramdas did Purascharana of the Rama Mantra of thirteen letters Sri Ram Jaya Ram Jaya Jaya Ram thirteen lakhs of times at Tafali, near Nasik, on the banks of the Godavari. After the Purascharana was over, once again Ramdas had Darshan of Lord Rama. It is said that Ramachandra ordered Ramdas to visit holy places such as Nasik, Haridwar, Kasi, etc.

Ramdas sprinkled over a dead body holy water uttering the name of Rama and the dead body was restored to life. Ramdas had to do this, because he had blessed a woman who had just lost her husband.

Ramdas was an Advaitin and a Bhakta in one. He had this very noble quality that he never hated any religion or nation. His main object was to spread the Hindu religion throughout India.

Ramdas had not visited Pandharpur, as he had not known the existence of this holy place. One day, the tradition says, Lord Panduranga Vittal, in the form of a Brahmin, with a batch of three hundred pilgrims, appeared before Ramdas and asked him whether he had any objection to see Lord Krishna. Ramdas replied in the negative. Panduranga then took Ramdas to Pandharpur, and when the Bhaktas approached the temple, the Brahmin disappeared. Ramdas then knew that it was none other than the Lord that had brought him to that holy place. He entered the temple, and to his great surprise, found Sri Rama standing alone on a brick.

Ramdas addressed the Deity thus: "O Lord, what are You doing here alone? Where is Your brother Lakshmana and Your consort Sita Mata? Where is Maruti and where are the monkey hordes?". On hearing these words, the image at once transformed itself into Sri Pandarinath. Ramdas then praised Panduranga for His kindness, prostrated before Him and sang songs of joy for getting His rare Darshan. Ramdas now felt doubly convinced that the several incarnations of the Lord were but His several forms and preached that everyone should respect and worship the One who took care of one and all in the world. Ramdas then worshipped Panduranga to his heart's content and became a frequent visitor and Bhakta of Panduranga Vittal also. In Pandharpur, Ramdas came in contact with Tukaram and other saints of Pandharpur. In his pilgrimages, Ramdas observed and studied the social, political and economic conditions of Indians and their utter helplessness in life.

It is said that Sri Rama ordered Ramdas to go to the banks of the Krishna and help the cause of Shivaji, the incarnation of Siva and founder of the Kingdom of Maharashtra. Ramdas came to the Krishna and went about preaching from Mahabaleshwar to Kolhapur. He established eleven principal seats of Maruti which emphasized the importance of physical development. He installed the shrines of Sri Ramachandra at Champavati and introduced Sri Rama Navami Mahotsava and the procession of Sri Rama's chariot. It was at the place called Singanvadi that Shivaji became the disciple of Ramdas.

Shivaji placed the sandals of his Guru on the throne and acted as regent of the kingdom under the orders and guidance of his Guru and adopted as ensign the flag of orange colour. There is a beautiful and romantic incident current in the Maharashtra country about Shivaji's adoption of the Gerua flag and his ruling the kingdom in the name of Saint Ramdas.

One day Shivaji saw, from the terrace of his palace, his Gurudev Ramdas going about the streets with his begging bowl. Shivaji was surprised and could not understand why his Guru should beg when he himself had already placed all his resources at the disposal of his Gurudev. However, Sadhus are difficult to understand. Shivaji therefore called for his companion Balaji, wrote a small chit and asked him to give it to Guruji when he came to the palace. About noon, Ramdas came to the palace with his bowl and Balaji prostrated before Gurudev and placed the chit at his feet. Briefly, the chit conveyed that Shivaji had made a gift of his whole kingdom to Gurudev and he humbly solicited his Gurudev's blessing. The Guru smiled and told Balaji that it was alright. Next morning Ramdas called on Shivaji and asked him what he proposed to do with himself as he had disposed of his kingdom.

Shivaji prostrated himself before Ramdas and said that he would be very happy and consider himself blessed if he should spend his life in his Gurudev's service. Then Ramdas said, "Take this bowl and let us go on our rounds". So Ramdas and Shivaji went round Satara begging. The people reverently bowed before the pair and gave them alms. The pair returned to the river. Ramdas prepared his simple meals and Shivaji partook of what was left after his Gurudev had finished his meals. Then Shivaji, with a smile, asked his Gurudev what he was going to do with him after reducing him to a beggar. Ramdas knew that the opportunity had come to set up a lofty ideal for the king.

Ramdas asked Shivaji to rule the kingdom in his (Ramdas's) name, to take the Gerua Chaddar for his banner and defend its honour with his life, and to think that the kingdom did not belong to himself but treat it as a trust to be ruled justly and well before God. And thus had come the Gerua banner to Shivaji.

Ramdas spent several years in visiting holy places of pilgrimage. He erected several Hanuman temples in Maharashtra. When he returned from his pilgrimage, somebody told Ramdas that his mother was pining for him, and that she had lost her eyesight on account of extreme sorrow arising out of his separation. Ramdas immediately went to see his mother. He made prostrations to his mother. His mother was exceedingly pleased to meet her son after an absence of many years. Ramdas touched the eyes of his mother. She got back her lost eyesight through the Yogic power of her son.

His Preachings and Life

Ramdas's ways were very peculiar. He appeared to the outside world as a mad man. He had a small bow. He used to have, by his side, a large number of stones with which he pelted every object he saw. To men really interested in his teachings, he gave the Mantra Sri Ram Jaya Ram Jaya Jaya Ram.

Ramdas had eleven hundred disciples, of whom three hundred were women. The women disciples were also expert preachers and were virtuous. Ramdas sent his disciples to all parts of India to spread the Hindu religion. His disciples and Mutts in the North directly or indirectly helped Shivaji and his work. Ramdas's organisation in the South, round about Thanjavur, helped Shivaji's son Rajaram to go to Jinji and carry on the Twenty Years' War with Aurangazeb. When Ramdas visited Thanjavur, Venkoji, who was the step-brother of Shivaji, became his disciple. Ramdas appointed Bhimaswami, his direct disciple, as the Mahant of the Thanjavur Mutt.

Ramdas generally preferred to live in the forest, where he would say, he had better meditation. In his last days, Ramdas devoted his time partly to literary activities and partly to the systematic building up of his disciples and Mutts, both in the North and in the South. The literary works of Ramdas such as Dasabodh, Manache Shlok (verse addressed to the mind), Karunashtakas (hymns to God) and Ramayana (describing only the conquest of Lanka by Sri Rama and the vanquishing of Ravana) are very popular. It was as a tribute to Ramdas's extraordinary patience and determination in rehabilitating the Hindu religion in India that people named him Samartha (all-powerful) Ramdas, a name which he richly deserved. This great Guru of Maharashtra breathed his last in 1682 at Sajjangad, near Satara, a fortress which was given to him by Shivaji for his residence.

Ramdas repeated the Rama Mantra with his last breath. At the time of his departure from the world, a dazzling light emanated from his body and Ramdas was absorbed in the image of Lord Rama.

The last instructions of Ramdas to his disciples were: "Do not think much of your bodily wants. Have Satsang with devotees. Keep the image of Lord Rama in your heart. Repeat the name of Lord Rama always. Annihilate lust, greed, anger, hatred and egoism. See Lord Rama in all creatures. Love all. Feel His presence everywhere. Live for Him alone. Serve Him in all beings. Make total and unreserved surrender unto Him. You will always live in Him alone. You will attain immortality and eternal bliss".