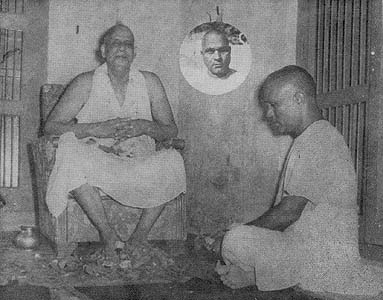 The Master with "the Bismarck of the Ashram", Swami Paramananda

Born on the 15th of February, 1907, in the town of Nagore in South India, as the youngest son of the prosperous Brahmin couple Sri N. Sambamurthy and Smt. Sundarambal, he was known as S. Jayaraman in his Purvashram. After his early education in Nagore itself, he served for a short time as a teacher in the local Catholic Mission School. He then went to Madras in 1927 and got employed in the Railways. The young boy, who had an adventurous spirit and an innate urge for renunciation, happened to read Swami Sivananda's first writing 'Practice of Yoga' at the Connemera Library, Madras, in 1929. He started postal correspondence with Swami Sivananda and expressed his wish to renounce the world and join him at Rishikesh. He was, however, advised not to be hasty in giving up his job but to serve the Ramakrishna Mission. But Jayaraman's zeal could not be subdued and he went to Rishikesh to have Swami Sivananda's Darshan in December 1930. Swamiji was, however, not there; he was on a long tour. After a few days stay at Swarg Ashram, Jayaraman made a bee-line to the Ramakrishna Mission Ashram in Calcutta and became an attache to Sriman Mahapurushji Swami Sivanandaji Maharaj, one of the first disciples of Sri Ramakrishna Paramahamsa. As a disciple of Sri Mahapurushji, he served him with heart and soul and got himself endeared to the Swamiji. On the Mahasamadhi of Mahapurushji, Jayaraman felt impelled to reach the feet of Sri Swami Sivanandaji Maharaj of Rishikesh and forthwith reached the sacred banks of the Ganga. Swami Sivananda initiated him into the order of Sannyasa, under the monastic name of Swami Paramananda, in the year 1932, in Swarg Ashram.

Paramananda joined Sivananda when the latter had really no Ashram of his own, and was taking his Bhikska from the Annakshetra of Swarg Ashram, living in a neglected, dilapidated hut. Paramananda had naturally to be happy with a rough life bereft of even the normal amenities of one's life. Those were the very hard days of the Tapas of Sivananda, when he used to utilise the inside portion of used envelops or margins of old newspapers thrown on roadside for embodying his immortal message to humanity. This saint of such rigorous self-discipline and austerity, Paramananda served, and served with unabated energy, enthusiasm and tireless fervour.

Swami Paramananda was with Gurudev from his remote Swarg Ashram days and was the pioneering Executive of the Divine Life Society during the days of its inception. He was then the veritable right hand of Sri Gurudev and was the sole in-charge in those difficult days of the spade-work of the Institution which was just gaining ground as the would-be world renowned Organisation.

Swami Paramananda was responsible for the typing, proof-reading, printing and publishing of most of the early writings of Sri Gurudev.

Swami Sivananda sent Paramananda to Madras to assist Mr. P.K. Vinayagam, Editor of the periodical 'My Magazine of India', in which a page was already being devoted to Swamiji's article 'Precepts for Practice', which Swamiji continued to contribute for more than two decades. Stationed in Madras, Paramananda got published many of Gurudev's works through the good offices of Mr. P.K. Vinayagam.

So hard-working and dedicated was Swami Paramananda that Sri Gurudev took him, as also Sri P.K. Vinayagam, as Trustees of the Divine Life Trust Society on its formation in 1936. Swami Paramananda was also nominated as the joint Secretary of the Society and he, in collaboration with Swami Swaroopananda did superhuman services to Swami Sivananda and his Mission.

"Matchless Guru-Bhakti (devotion to the Guru), an astounding dynamism, unflinching devotion to the cause he espouses, intense activity in the service of his Master, love and affection towards all who serve the cause, a great love for discipline and an innate capacity to maintain it, and selflessness to the absolute degree, selflessness that perfumes all the other virtues and strikes awe and evokes respect in all—that, in short, was Swami Paramanandaji Maharaj.

"Even a mere catalogue of the services rendered by Paramananda to the divine cause espoused by the Master would fill the pages of a large volume. Suffice it to say that when a holy wish arose in the Cosmic love-lake of Swami Sivananda's heart, it flooded Paramananda's entire being; when a word issued from Swami Sivananda's lips, Paramananda was ready with the response, 'It is done, Swamiji.' Thus were born the Divine Life Society, the Sivananda Publication League, the Sadhana Weeks, the Ashram, and the Divine Life Magazine, etc."

Such was the Master's confidence in Swami Paramananda's ability and fitness that when he suddenly disappeared from the Ashram in February, 1941, for rest on account of poor health, he had left a note nominating Swami Paramananda as the President of the Divine Life Society, though he returned after a week's absence.

Swami Paramananda became the second General Secretary of the Divine Life Society from 1939 and did yeoman service till 1942, when came an important turning point in his life. In October 1942, he left the Ashram, with a general letter of introduction from the Master. But his devotion to his Master and his divine mission did not diminish in the very least by leaving the Master's physical presence; he continued to serve the cause wherever he went,—Punjab, Kashmir and Madras—during the next four years.

In 1946 Swami Paramananda came to Rishikesh to have Darshan of Gurudev and the latter asked him to stay at the Ashram. This gave him the golden opportunity to plan and prepare and celebrate Sivananda's Birth Diamond Jubilee in 1947, in an unprecedented manner. In 1950, Swami Paramananda organised the Epochal All-India-Ceylon tour, from 9th September to 8th November, a task which none else could do. It was he, again, who left no stone unturned to see through the success of the 'World-Parliament of Religions' held at the Headquarters of the Society in April,: 1953. On 9th January, 1956, he set up the SIVANANDA REGALIA, a marvellous exhibit of memorable articles associated with Gurudev from the earliest of days. While declaring open the 'Regalia', Gurudev paid the following tribute to Swami Paramananda: "Swami Paramananda has got original ideas. It was he who built the Bhajan Hall, collecting donations from people. It was he who started the Publication League. It was he who organised my All India Tour. He was responsible for bringing out German and French translations of my books. He wrote to the publishers and induced them to take up the translations. He has spread my knowledge throughout the foreign countries. He is a very hard worker. He works the whole night." On 8th September, 1956 the grand 'Sivananda Mandir' was consecrated, with the beautiful marble statue of the Holy Master, which Paramananda got made from Madras.

Swami Paramananda was often called the 'Bismark of the Ashram', meaning thereby that he was virtually the foundation, the basic structure of the edifice of the Divine Life Society, which he managed to maintain with all its strength and stability, by his sternness, precision and unparalleled devotion to Sri Gurudev Swami Sivananda. Many a time, Swami Paramananda used to say that there is no Ashram, there is no Divine Life Society, there is only Swami Sivananda; and Gurudev's word was gospel for him.

With many more achievements to his credit, that Great Soul attained Mahasamadhi at 6:30 p.m., on Monday, the 4th of December, 1972, at Sivananda Ashram. Paying his tribute to Swami Paramananda, revered Swami Chidananda said: "He has been to me a great inspiration and an exemplar on the path of true discipleship. To understand what implicit submission to the wishes of the Guru is, to learn what whole-souled dedication to the service of the Guru is, and to know what unswerving loyalty to the mission of the Guru is, you have to humbly observe this illustrious and senior most disciple of that Great Master, Swami Sivananda."