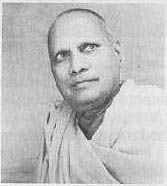 Swami Omkar was born in the East Godavery District. His parents were without children and prayed fervently to God in the hope of getting a child. One very auspicious day, a tall Mahatma came to their home and blessed the couple, giving them some holy water to drink. The mother drank this water with all reverence and devotion. The Mahatma disappeared as suddenly as he had come. After some months, to the great joy of the couple, a little baby boy was born to them. They named him Venkateswara. Little Venkateswara was later to grow up to be the great saint, Swami Omkar.

At the age of three Venkateswara would sit still like a statue beside his father during the daily prayer. He would listen to the reading of the Gita very attentively. In this way, the boy was given a strong spiritual foundation from early childhood. Swami Omkar often said later, "As are the parents, so are the children".

Venkateswara's mother died when he was very young. His father now became like a mother to the little boy. He was utterly devoted to his son and gave him everything he desired, both materially and spiritually. The boy went to the best school and wore the most expensive clothes.

Venkateswara had a little sister who looked after all his needs until she was twelve years old, when she developed a blood condition. But she was not to live long and very soon passed away, taking her brother's name. Since then, whenever Swami Omkar served women, he would feel that he was serving the form of his little sister.

Even while he was still young, Venkateswara went away to Rishikesh, in the Himalayas. Here he assumed the name Omkar, and spent many years in deep meditation.

Now he had a call from within to go to America. He described his visit as follows: "I went as a seeker of Truth, not to teach but to learn all that is best in America. There is so much to learn in order to rise from darkness to light."

Even at this early age, Venkateswara had unusual mental and psychic powers. He could heal the sick, whether their ailments were mental or physical. He would write the sacred symbol Om on water, and give this sacred water to the patient. The patient would feel immediate relief.

Gifted with a universal vision from his early boyhood, Swami Omkar soon realised the eternal Truth. He founded the Sri Shanti Ashram, the abode of peace, at Totapalli Hills in the Andhra province.

Swami Omkar was a great Karma Yogi. From dawn to dusk he would be engaged in endless activity-helping devotees in their spiritual progress, watering the plants, or feeding the animals. He had a very compassionate heart from his very boyhood, and would not hurt any living creature. He loved plants and would often talk to them.

Many saints visited his Ashram and stayed with him for some time. During the early years of his life as a monk, the Divine Master, Swami Sivananda, also stayed at Shanti Ashram for some months and served the sick. Many years later, Swami Omkar, too, visited the Master at his Ashram at Rishikesh. Both the saints had great love for each other.

Shanti Ashram is a beautiful place surrounded by hills and enchanting scenery. There is a small hospital and a school for children run by the Ashram. There is a mobile clinic also to serve the needs of the hill people. There are several other branches of the Ashram, at Waltair and in other places. At the Waltair Ashram there is a small school for deaf and dumb children.

Swami Omkar had a very broad and liberal heart. He had great love and reverence for the saints of all religions. All approaches to God were valid for him.

Swami Omkar was so compassionate that he once gave a piece of bone from his own thigh to be grafted in a little girl to save her life. He spent several months in hospital as a result of this great sacrifice on his part.

Such a noble personality, who worked heart and soul for spreading peace in the world, passed away in his ninety-third year, on 10 June, 1982.

Shanti Ashram, which is located at the foot of the beautiful Totapalli hills in Andhra Pradesh, is currently rendering active service to the poor and needy, under the able and loving guidance of Mother Jnaneshwari, who was appointed by Swami Omkar as his successor.

Swami Omkar's biography has been reproduced from Swami Sivananda's "Yoga Lessons for Children (Vol. 7)", published by the Divine Life Society of South Africa. This encyclopedia on Hinduism and Yoga is currently on sale.