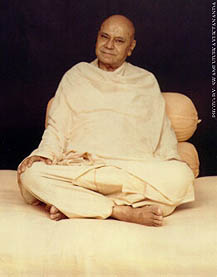 Born on the 15th of December 1917, and known as Karunanidhi, he hails from Andhra Pradesh. As he lived in both the outskirts of Andhra Pradesh and Karnataka, he is very conversant with the atmosphere of both the States and knows Telugu and Kannada languages.

When Karunanidhi arrived at the Ashram, he found that revered Sri Gurudev was away upon his "All-India Spiritual Awakening Tour". He was cordially received by Swami Krishnananda who was the in-charge of the Ashram during the absence of Gurudev and all the other office-bearers. He awaited Gurudev’s return and met him for the first time on 8th November, 1950. It would appear that right at this first brief meeting and talk Gurudev immediately recognised his potentialities. Very surprisingly and to the wonder of many people, Sri Gurudev at once gave him the work of the Cashier of the Ashram. Those were very hard days as the funds were almost nil, and it was not easy for anyone to perform the duties of the Cashier. Karunanidhi as a Cashier, prior to his being ordained a Sannyasin, spent very difficult times of course with shop-keepers who were creditors of the Ashram. But with his calm, quiet and reticent nature he managed his little function of the Cashier those days very well. Recognising his spiritual worth, Sri Gurudev gave him Sannyasa within months of his arrival, i.e., on Mahasivaratri, the 6th of March, 1951 and named him Swami Madhavananda. After two or three years of his service as a Cashier, he was appointed by Gurudev by nomination as a Secretary, which, of course, increased the weight of the work he had to perform. This position of responsibility he ungrudgingly accepted and immediately commenced this performance spread over a wide area of the different departments of the Institution. Not only this; together with the responsibilities as Secretary, he took upon himself, of his own accord, the additional burden of supervising the construction works of the Ashram, sheerly with the intention of seeing that there is no wastage of any kind and the building works are efficiently carried on in the interest of public good. Those were days when the Ashram was inordinately hard-pressed with inadequacy of financial resources and the work of the Secretary was indeed not a happy job. It was something which would wear out anyone and fatigue even a strong personality. The Swami indeed worked very hard and steered the course of The Divine Life Society’s functions at the Headquarters during those difficult days when the income side of the Institution was hardly worth mentioning. There were many occasions when it looked that it was difficult for the Ashram to make both ends meet and one could not predict the fate of the Ashram the next day. Such was the nature of the problem created by the financial stress. Swami Madhavananda did indeed bear the brunt of the pains that an Executive of the Institution would have to undergo under such circumstances. The entire saga of the history of the Ashram at its Headquarters during those years would speak eloquently of the sacrifice which the Swami personally did, as the times required, without rest and without even adequate sleep.

The several years of such strenuous work naturally told upon his system, particularly the condition of his heart, which called for special attention by way of medical treatment. All this did not deter the Swami from continuing his Seva to the Institution, and it, indeed, did not cease at any time.

At the same time, he is a very religious type of person, meticulously following a daily routine of prayer and worship for several hours. He is a reserved type of person who minds his own business, as one may say, not interfering and unconcerned with anything in the world, except whatever work is entrusted to him, and always confined to his own Kutir of prayer and worship.

Swami Madhavananda was elected as the Treasurer of the Divine Life Society in August 1963, soon after the Mahasamadhi of the Master. And in due recognition of his glorious services, he was elected as the Vice-President of the Divine Life Society, in the year 1975, which position he continues to hold till this day. This was really as it ought to have been, considering not only his elderly personality but also the intense sincerity with which he has always been identifying himself with the Ashram’s spiritual ideals, the amiableness of his nature and the goodness of his hearth to mention only a few of the exemplary characters which are embodied in his person.