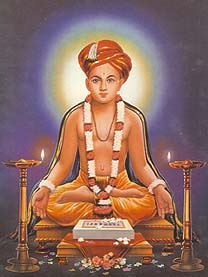 The name of Saint Jnaneshwar is on the lips of everyone in Maharashtra. He was a born Siddha. He was a Yogi of high attainments. He had control over the elements. His work Jnaneshwari is the crest-jewel of Marathi literature. The simple style, the beautiful illustrations and the apt similes have rendered the book attractive, charming and extremely useful. Jnaneshwari is to Maharashtrians what the Ramayan of Tulsidas is to the Hindi-speaking people. Jnanadev lived for a few years, but he did wonders. He was a genius, a Yogi of deep spiritual experiences and a sage of supreme order. He boldly criticized his predecessors. He was a great social and religious reformer. He laid the foundation of the great Bhakti movement in Maharashtra. He was a fine poet to boot.

The life-history, origin and other particulars of great saints, prophets and world teachers are all very strange and mysterious. Jnanadev was born of a Sannyasin. Lord Jesus was born of immaculate conception. And he was the son of a village carpenter. He was not born in a palace; he was born in a stable or a cave where there was a bundle of straw. Kabir was the son of a weaver. He was found in a lake. Sankara was a poor child of Kaladi.

Jnanadev, or Jnaneshwar (Lord of Jnana or knowledge) as he is sometimes called, was one of the ancient saints of Maharashtra. He, and Mukund Rai who lived about a hundred years earlier to him, are the founders of the Bhakti Panth in Maharashtra.

In the thirteenth century, there lived in Apegaon a village-accountant called Govindapanth. He had only one son named Vittalpanth. Vittalpanth was the father of Jnanadev. Vittalpanth was pious and dispassionate even from his boyhood. He was fond of pilgrimage to holy places. He was a profound scholar in Sanskrit. His heart yearned for Self-realisation. He had a great liking for taking Sannyasa.

Vittalpanth married Rukmabai, daughter of Sridharpanth of Alandi, which is twelve miles from Pune and which contains the Samadhi of Jnanadev.

Vittalpanth was disgusted with worldly life. He went out on a pilgrimage and returned back to Alandi. He wanted to take Sannyasa. His wife and father-in-law were not in favour of his taking Sannyasa.

Vittalpanth went to Varanasi and took Sannyasa from Sripad Yati (Ramananda Swami). Rukmabai came to know that her husband had entered the fourth Ashrama of life. This was a great shock to her. She prayed to God fervently for reunion with her husband.

Sripad Yati, the Guru of Vittalpanth, happened to come to Alandi on his way to Rameswaram. Rukmabai approached him and prostrated before him. The Yati blessed her: “You will be the mother of eight sons”. Rukmabai wept bitterly. The Yati said, “O blessed lady! What is the cause of your sorrow?” Then Rukmabai explained everything to the Yati.

The Yati thought that the young man who took Sannyasa from him must be the husband of this lady. At once he gave up his idea of going to Rameswaram. He returned to Varanasi, rebuked his disciple and said, “Go back to Grihastha Ashrama and make your wife happy. She wants to serve you. My blessings are with you”.

Then Vittalpanth carried out the orders of his Guru and came back to Alandi and lived with Rukmabai. The orthodox Brahmins of Alandi outcasted him and his wife. They said, “It is against scriptures to take to married life again after taking Sannyasa”. But Vittalpanth thought that he was doing the right thing as he was following the instructions of his Guru.

On one occasion, Vittalpanth went with his children to Tryambakeshwar, near Nasik, situated in the vicinity of the source of the river Godavari. As they were going round the Brahmagiri mountain, they met a tiger. Vittalpanth hurried away with his children, but missed Nivrittinath. Nivrittinath entered the cave of Jnaninath. Jnaninath initiated Nivritti into the mysteries of Yoga and gave him all his spiritual wealth. Some days later, Nivritti joined his father and younger brothers.

Vittalpanth, on his return to Alandi, was treated as an outcaste by the Brahmins. He and his family members were put to a great deal of hardship and humiliation. Other children of the village would not mix with their children in play.

The sons attained boyhood. The parents wanted to perform their holy-thread ceremony. The Brahmins declined to perform it. They said, “A Sannyasin should not lead the married life. The scriptures do not allow the performance of the thread ceremony of a Sannyasin’s children. Sons born of a Sannyasin cannot have the right of wearing the thread. They cannot be considered as Brahmins. You and your wife have violated the sacred laws of the scriptures. There is only one Prayaschitta for you both. You both should give up your lives in the Triveni of Prayag”.

Vittalpanth and Rukmabai left Alandi and sacrificed their lives at the confluence of the Ganga and the Yamuna at Prayag. They thought that the Brahmins would take pity on their sons at least then and perform the thread ceremony. Nivritti was then about ten years, Jnanadev about eight and the youngest about five years.

Jnanadev was very keen on wearing the holy thread in order to fulfil the desire of his parents who had sacrificed their lives even for that purpose. He again approached the Brahmins of Alandi. The Brahmins now were moved to pity when they saw the helpless condition of those boys. They said to them, “Bring a letter of authorization from the learned Brahmins of Paithan. We will then perform the thread ceremony for you”. The boys went to Paithan and saw the learned Brahmins. They recited the Vedas. The Brahmins said, “You are not entitled to recite the. Vedas. Stop the recitation now. You are the sons of a Sannyasin who came back again to his Grihastha Ashrama”. Jnanadev replied, “Anybody may recite the Vedas. Even this buffalo may recite”. He placed his hand on the back of the buffalo and immediately the buffalo recited the Veda for one hour, from the point where Jnanadev had left, with correct rhythm and intonation. The Brahmins were struck with wonder and awe. They said, “These are not ordinary boys. They are the very incarnations of Shankar, Vishnu and Brahma”. Really the boys were born Siddhas. Even then the Brahmins refused to perform the thread ceremony, though they admitted the greatness of the boys. The buffalo of Paithan died at Ale in the district of Pune. There is a Samadhi for this buffalo. This Samadhi exists even now. The boys stayed at Paithan and taught the Gita to the people. Jnanadev performed many miracles. A Brahmin had to perform the anniversary of his father. The Brahmins did not turn up. Jnanadev brought the Pitris themselves to earth from the heaven. He brought to life a dead man. The man’s name was Sachidananda Pava.

Jnanadev wrote Jnaneshwari, his wonderful commentary on the Gita, at the age of thirteen. The book was completed in 1212 at Nevasa, a town on the banks of the Pravara river in the district of Ahmednagar. The actual writer was Sachidananda Pava. Jnanadev’s commentary on the Gita is considered as one of the best. In a big assembly of Sanskrit Pundits in Varanasi, Jnanadev was elected as the President.

Jnanadev lived for about six years after he had completed Jnaneshwari Gita. “

Jnanadev met Chang Dev. Chang Dev was a famous saint who had managed to defy death by his Yogic powers for a thousand and four hundred years. He used to live at Vateshwar. He was very proud of his attainments in Yoga. He had Bhuta Siddhi or complete control over all living beings. He used to travel on a tiger with a serpent as whip. Chang Dev had a curiosity to see Jnanadev. He started with a large number of disciples, riding on a tiger with a serpent as whip. Jnanadev and his brothers saw Chang Dev coming in all pomp. Jnanadev asked the wall on which he was seated to move forward to welcome Chang Dev.

Chang Dev witnessed this great miracle performed by Jnanadev. He was humiliated. He quietly got down from the tiger, made prostrations to Jnanadev and accepted him as his Guru.

Mukta, a mere girl of fourteen, gave instructions to Chang Dev, an old man of a thousand and four hundred years. She said, “O Chang Dev! Listen. If you want to attain salvation, the first step is sincere devotion. Devotion will bring Vairagya. Vairagya will lead to Jnana. Therefore your aim should be Jnana and your first foot must be on devotion”.

Jnanadev had full control over the elements. When there was no vessel to prepare food, his sister prepared bread on his back. Jnanadev is regarded as an Avatara of Lord Krishna.

Nivritti was really the Guru of Jnanadev. Nivritti asked Jnanadev to write an independent book embodying all his experiences in Jnana. Jnanadev wrote Amritanubhava which contains the highest experiences of Jnanadev in 800 couplets.

Jnanadev made it known to his friends and brothers that it was his desire to enter into Sanjivani Samadhi or Samadhi while alive. This he did at Alandi on the 13th day of the dark half of the Kartik month, about the end of October 1296, in his twenty-second year. He drew up all the Prana to the Brahmarandra and gave up the physical body. If anybody reads the Gita written by him by the side of his Samadhi, all his doubts will be cleared.

All the other brothers and the sister also left the world within a short space, of less than eight months. Sopan entered into Samadhi on the banks of the river Karha at Saswad, which is at the bottom of the hill Purandhar, near Pune. Chang Dev attained Samadhi in a village called Punatamba. Muktabai dissolved herself in the five elements at the age of eighteen, when there was a big storm. Nivritti entered into Samadhi at Tryambak which is at the source of the Godavari.

Thus passed the four great souls. Within a period of twenty-five years, they broke down the bigotry of the Brahmins of the period, raised them from the darkness of ignorance, firmly established the path of Bhakti and Jnana, made people realise that all were equal and that it was the actions which counted for the glory and excellence of a man and not the accident of birth or the mere study of the Vedas and Vedanta. Among Jnanadev’s followers were Namdev, a tailor; Namdev’s maid-servant Jani; Narahari, a goldsmith; Chokamela, a Mahar; Sena, a barber; Gora, a potter; Savanta, a gardener; and Bhagu, a Maharin, who were all respected as great devotees of Krishna.

Jnanadev was the founder of an institution called Warkari Sampradaya which is still alive in all its glory in Maharashtra. It is called “Wari to Pandharpur”. All who have accepted this Wari undertake to go to Pandharpur on Ashadh Ekadasi (June-July) and Kartik Ekadasi (October-November) days every year. They must visit Pandharpur at least once annually, if not on both these days. It is considered so very sacred that except in the event of physical illness, they continue to go to Pandharpur year after year through the whole life and from generation to generation.

May you all draw inspiration from the life of Jnanadev! May you all soar high in the realms of knowledge by studying carefully Jnaneshwari and Amritanubhava! May the blessings of Jnanadev, a rare Siddha Yogi, be upon you all! May you all visit his place of Samadhi in Alandi during his anniversary day and receive the blessings of the saint who still feeds, in secrecy, his devotees with the nectar of immortality!!