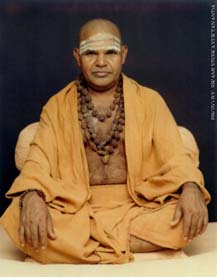 G. Sannyasi (that was the pre-Sannyasa name of Swami Devananda) was born on the 19th of June, 1937 (Eswarnama Samvatsar Jyestha Shuklapaksha Ekadasi Day), in a pious family in Andhra Pradesh. At a very young age he left home and joined Sri Brahmananda Ashram in Andhra Pradesh and took Sannyasa in 1954. For sometime he was in the holy Vyasashram, Yerpedu, near Tirupati and then came to Rishikesh in 1957.

Swami Sivananda recognized the worth of this young Swami and took him for his personal service. Certainly it is the purva-punya (meritorious deeds of past births) of Swami Devananda that gave him this blessed and rare privilege of doing all sorts of personal service to Sri Gurudev, including menial service. This close and constant association with the sage had its unfailing effect on the young monk,–he automatically imbibed the divine virtues from Sri Gurudev, particularly of the gift of ‘giving’. His service to Sri Gurudev during the last days has earned him the special blessing of the master, which has made him what he is today.

A man of self-effort and determination, coupled with devotion and application, he has made himself great in his own way. He is a master Sankirtanist, who can awaken and keep thousands spell-bound by his soulful Bhajans and Kirtans, and transport them to a different realm altogether, for which he is invited every year to Orissa and Andhra Pradesh. And recently he was chief organizer of the group of Sannyasins and Sadhaks who went from the Ashram on an All-India tour, in 1985, propagating the teachings of Sri Gurudev’s work into the Telugu language. His dedication to Sri Gurudev and his Mission is total and undivided.

Swami Devanandaji Maharaj left for his heavenly abode at 10.20 am on 7th January 2000.