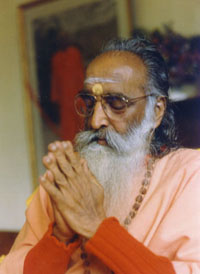 Known as Balakrishnan, he was born of noble parents at Ernakulam (Kerala) on the 8th of May, 1917. The rigidity of the family daily routine of worship, lasting for quite a few hours, became part and parcel of the mental and moral make-up of the young lad. And, added to this, he had the rare chance of coming under the influence of his family-Gurus who were saintly souls. Right from young age he had the inquiring mind which critically questioned everything. He was equally brilliant in his studies and emerged out of the Lucknow University as a Master of Arts. Like many of the highly learned youths who find themselves in a dilemma as to what to do with life when they come out of the universities, Balakrishnan too was assailed by doubts with conflicting ideologies. But providence guided him properly; he studied the great works of Swami Vivekananda, Aurobindo and others, and found his way to his Master, Swami Sivananda.

Swami Sivanandaji Maharaj knew that he was an exceptionally gifted person and entrusted him with conducting a Gita Committee, as Gurudev called it, which consisted of some members,–the members being Sri Balakrishna Menon (Swami Chinmayananda), Swami Krishnananda, a very learned philosopher from Bihar called Sri Nanda Kishore Srivastava, etc. He used to conduct classes in the Ashram, now and then. He was ordained into Sannyasa by Sri Gurudev on 25th February, 1949 to pursue further studies of scriptures under Swami Tapovanamji Maharaj, in Uttarakashi where he stayed with the great Master studying Panchadasi and other Vedanta Texts as well as Upanishads. Having mastered these texts, Swami Chinmayananda started his own Jnana Yajna Mission and moved from corner to corner of India conducting Gita Yajna classes, Upanishad classes and discourses on the scriptures, which earned him great reputation as an extraordinary orator and a masterly exponent of India’s culture, its literary heritage and scriptural lore. Swami Chinmayananda has also travelled to the West many a time. He has Centres in various places in India and also abroad. Today he is one of the world-figures who have hoisted the flag of India’s spiritual heritage not only in this country but also in the other countries of the world.