This article is a chapter from Swami Chidananda’s biography “The Holy Stream”. 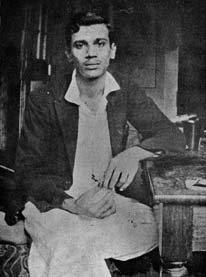 The story of Swami Chidananda has been a story of total divinisation of the human personality. It is a story of silent service and complete self-effacement. On the basis of the profound authority of his personal experience and direct realisation, therefore, this peerless saint of the Himalayas could proclaim to the world of seekers: “Yoga is not only in Nirvikalpa Samadhi. It is in every moment.” His life at every moment glows with an immaculate godliness.

The life of Chidananda is a life of holy service. Service and sacrifice have been its cardinal features. His Samskara was such that high spiritual virtues were instinctive volitions with him. Thus, while in his teens, this saint of boundless mercy had already taken upon himself the awe-inspiring task of being a father and a doctor to the unfortunate lepers who were spurned and hated by all their fellow beings. Nobility, humility, purity and compassion came naturally to him. Thoughts of a prosperous material career never allured him. He was born with a silver spoon in his mouth and brought up in the purple. But riches and worldly status did not mean a thing to him. Even in adolescence he was far above the snares of the senses. Service and sacrifice alone made him happy. Association with saints comprised his only craving. Meditation was his only passion. Worship was his only pleasure.

In the very prime of his youth this born Siddha felt that he was being roasted in the fire of Samsara. And so, when the opportune moment came, he promptly renounced his hearth and home. On a sacred full-moon day he met his Master by the side of the holy Ganga at Rishikesh. He took the ochre garb and linked himself to the hoary monastic order. For more than a decade he merged himself in intense Seva and Sadhana and shone as an illumined sage. For another decade during the life time of the Master, he carried the message of Yoga and Vedanta to the New World. Returning, he voluntarily sank into seclusion leading the life of an isolated wandering monk. He was indifferent even to the order of Sannyas. He moved freely like an Avadhut, free from all fetters, depending on God and blissfully dwelling in the plane of God-awareness.

At this stage the Cosmic Will brought him back to the plane of Loka Sangraha, the highest spiritual service. The Holy Master Swami Sivananda threw off his mortal coil and had merged in the Absolute. The task of spiritual leadership of the Master’s divine mission, therefore, fell upon the shoulders of his chosen disciple. Thus the world renouncer grew into the most dynamic of the holy workers in the modern world.

Chidananda serves, indefatigably, through all hours and all seasons. He serves the Lord in this cosmic form. He serves his Master through his divine mission. He lives in the world of Rama. How Rama came into his life is an instructive lesson to every seeker. To him in his childhood He came as the idol Kodanda Rama, whom he worshipped and in whom he had his whole being. At a later stage, He came to him in the shape of the unfortunate lepers. Then a time came when the Lord appeared before him in the form of the inspired words of Ramdas. Next, the life of Ramakrishna Paramahamsa rose before him as a beckoning ideal. Saints and mystics blessed him. At last, the Lord gave him Darshan in the form of his Sadguru. Sivananda entered into his very being. He was filled with devotion to Guru. Sivananda dwelt in him and he dwelt in Sivananda. The two became one. In the words of Swami Krishnanandaji: “The legacy which he (Chidanandaji) has imbibed from Sri Gurudev is hundred per cent. We see in him all the miraculous and wondrous character of Gurudev.”

Sarvam Ramamayam Jagat. Sarvam Vishnumayam Jagat. Vaasudevah Sarvam Iti. Sarvam Khalvidam Brahma. These are the formulas of his living and the fundamental recipes in all situations in life. He beholds the whole world as the manifestation of divinity. The World is Guru. Life is discipleship. Therefore, one has to live one’s life to serve the world and learn wisdom from the world itself. This is the Dharma that leads to Moksha. This is the keynote of Chidananda’s message to mankind. He conveys this message both by personal example and ringing precepts. Therefore, the master in him has courted a life of humble discipleship. He ever considers himself merely as the servant of Gurudev. He considers his own disciples as the disciples of his Holy Master, nay Narayana Himself. He is the crest jewel among the saints of the modern times. But he bows down before everybody. He prostrates himself with the utmost reverence not only before his elders but before the lowliest of men.

With inexhaustible compassion he serves and loves all living creatures on this earth. When he had reached the pinnacle of spiritual attainments, his heart melted at the sorry spectacle of his fellow-beings pathetically enmeshed in trivialities. Regardless of discomforts and difficulties he dedicated himself to the task of liberating them. He knew that men commit errors through ignorance. Therefore, he did not look down upon them or admonish them, but stooped with love to raise them up. His love is boundless. It stretches out to embrace beasts, birds and even insects.

Chidananda is the pure prism radiating the rays of Sanatana Dharma. Being an absolutely immaculate holy personality and a realised soul he is endowed with incalculable spiritual force. His very presence constitutes an uplifting experience, dispels the doubts of struggling seekers and infuses into them a new spiritual vigour. Numerous are his disciples. Numberless are the people who, though not initiated, take him as their Sadguru. But this great master of love and compassion moves as an ordinary humble student among them all. He is a born Siddha but continues to conduct himself as a seeker.

Godmen who scaled supernormal heights have left their indelible impress on the minds of men. Buddha left behind him the Four Noble Truths and the Eightfold Path. Sankara bequeathed to us the lesson of Ultimate Reality. Chaitanya gave us the ecstasy of Nama Sankirtan. Sivananda gave to humanity the fourfold Sadhana of service, devotion, meditation and illumination. In this unbroken line, Chidananda by his being and doing teaches us to seek the Creator not in some unknown mystic plane but in the midst of active creation itself. He has bequeathed to humanity the Yoga of the Centre, the Yoga of luminous consciousness, the Yoga of service of living beings and worship of God. He is a Nitya Nirantara Pujari worshipping God at all times. He gives stirring exhortation to his fellow-men to live the Divine Life. Most solicitously and solemnly he counsels:

Wake up at dawn each day to salute the Virat Svarup. Bow down in adoration unto Him before you start the day. Go through the day serenely, full of happiness and contentment. There is nothing to condemn in this world. Change your angle of vision. Forego a grudge. Forgive an enemy. Stop anxiety and smile gently unto yourself. Feel that the whole world is the manifestation of the Lord and you are serving the Lord in all these names and forms. Convert life into Yoga. Strive to be a Sadachari and Paropakari. God walks with the simple, reveals Himself through the sufferer, gives understanding to the noble and keeps His Grace from the haughty. So renounce ego, cultivate virtues and be free. Keep the mind always calm and peaceful. This is the secret of overcoming obstacles of the mind. Weigh all your words before they are spoken. Speak a few words only. This will conserve energy, give peace of mind and inner strength. Speak your love. Speak it again. Speak it still again. Speak it still once again. Never allow the mind to be completely extrovert. Be the conqueror of your mind, the subduer of your desires and a master of your destiny, for you are the master.

Gurudev Sivananda came to awaken you. Forget that you are the body. Remember that you are pure consciousness. Slumber no more. Be as humble as a blade of grass. Serve. Love. Give. Purify. Meditate. Realise. Be good. Do good. Be kind. Be compassionate. Divinity is your birthright. Unfold it by regular Sadhana. Isavasyamidam Sarvam–The whole world is pervaded by God. Therefore, serve humanity and seek divinity.

These are the ringing notes in the message of Chidananda. Like the great Master he equally emphasises: Do not merely believe, but be and live.

The great purpose of human life is God-realisation. Plants, animals, birds and insects grow and die. They do not evolve by conscious endeavour. They are not endowed by their Creator with the consciousness to discriminate between good and evil. But human life is a priceless gift of God. The highway of human life, however, is a razor-edged path. We are blinded by the senses which have robbed off our conscience. Our pitfalls are many. In this great and difficult highway of life now and then there appears a divine messenger as a friend and guide to support and sustain. He is the Guru. He belongs to the entire humanity. He knocks at your innermost chamber and compassionately solicits: “Oh blessed friend! When will you wake up from the deep sleep of ignorance… Come. Come. Wake up now. Break through this dream. Claim your birthright, recognise your true identity. Know your Real Nature right here and now and enter into the experience of divine joy, peace, wisdom which is your Eternal Svarupa.”

This is the divine call of Chidananda to the human race. May we respond to this thrilling exhortation and say like Arjuna in the “Song Celestial”: “Karishye Vachanam Tava–As Thou sayest so shall I act.”