This biography is from Swami Sivanandaji’s book Lives of Saints. 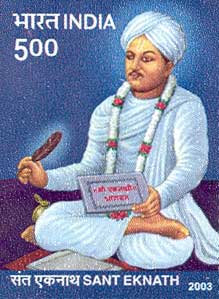 Ekanath is a well-known saint of Maharashtra. He was born of Suryanarayana and Rukmini in the year 1533 A.D. at Paithan in Maharashtra. The fire of devotion was kindled in his heart even when he was a boy of ten years. This was all due to his previous Samskaras. The Gita says: “There he regains the understanding acquired in his former body and strives still further for perfection”. (Ch. VI-43)

Once Ekanath heard an Akasa Vani, a voice from the sky, which said: “See Janardana Panth at Devagiri. He will put you in the proper spiritual path and guide you”.

Ekanath immediately proceeded to Devagiri, met Janardana Panth and prostrated at his feet. Janardana accepted Ekanath as his disciple. Janardana was the Dewan of the province of Devagiri. Ekanath lived with his Guru for eight years and served him heart and soul.

One day Janardana asked Ekanath to find out a mistake of one pie in the account book. Ekanath sat the whole night to detect the error. He laboured very hard and at last found it out just before daybreak. Ekanath was extremely glad. He informed his Guru that he had found out the error. Janardana replied, “You had to concentrate so much to detect a small error in the accounts. Then how much more concentration will you need to find out God? You rejoice now when you have found out a small mistake in the account. How much happy would you be if you find out the mistakes in your life’s account?”. Ekanath learnt a good lesson and spent much of his time in deep meditation and self-analysis.

In those days when there was no railway communication, Ekanath went on foot on a pilgrimage to Gangotri. He stocked water from the source of the Ganges in vessels and carried them in a Kavadi of bamboos on his shoulder. He then went to Varanasi and performed Puja-Abhishekam of one vessel of Gangotri water to Kashi Viswanath. He proceeded thence to Rameswaram to do Abhishekam there to Ramalingeswar. On the way, a few miles before Rameswaram, Ekanath saw an emaciated, diseased ass which was dying of thirst. As the sun was very scorching, Ekanath thought that God wanted to test him. Ekanath was a saint of Para Bhakti. He saw and felt God in everything, in every moment, and in every action. He thought that this was the best opportunity to serve Ramalingeswar in the ass. He never took that being for an ass. He forgot the Nama-Rupa. He saw the essence, Satchidananda, Asti-Bhati-Priya, in the ass. He remembered the words of Lord Krishna to Uddhava: “See Me in everything. Make prostration to asses, etc.” Ekanath never grieved a bit that he had lost the chance of serving Ramalingeswar. He said: “This is the best opportunity. This tantamounts to the feeding of one lakh Brahmins”. He broke the lid of the vessel and gave the ass all the water to drink.

God is everywhere, in every being. The water given to the ass, when it needed it most, had already reached Lord Ramalingeswar. Then and there Ekanath had Darshan of Ramalingeswar.

Ekanath obeyed the orders of his Guru and entered the life of a householder. He married Girija Bai, an ideal chaste lady.

Anger was unknown to Ekanath. Some of the mischievous people of the village wherein Ekanath was living wanted to excite him one way or the other. The villagers bribed a Mohammedan and asked him to excite Ekanath in some manner. The Mohammedan agreed. He went to the bank of the river and waited at the place where Ekanath used to take his bath. When Ekanath came after his bath, the Mohammedan spat on his face. Ekanath did not speak a word, simply laughed, and went again to take another bath. When he came up, the Mohammedan again spat on him. Ekanath smiled and went for another bath. This process went on a hundred and eight times. Ekanath was not at all affected. He was an embodiment of patience itself. When the Mohammedan found that Ekanath was absolutely serene, he thought within himself: “Ekanath is not a man. He is a god”. The Mohammedan was very much afraid. He thought that Ekanath would curse him to death. He trembled and prostrated before Ekanath and begged his pardon. Then the Mohammedan narrated the whole story and revealed to Ekanath that he had been bribed by the villagers to excite him.

At another time, the villagers bribed a poor Brahmin and induced him to excite Ekanath. The Brahmin thought within himself: “Which will be the better way to excite Ekanath? Let me catch hold of his wife. This will surely irritate him. I will succeed in my attempt. This is the best method”. So he decided to make his experiment. One day when Ekanath’s wife was serving food, this mischievous Brahmin entered Ekanath’s house and caught hold of his wife. Ekanath stood as a solid rock. He laughed heartily. What is this to a man who has no identification with the body, wife and other things! What is this to a man who has crossed the ocean of ignorance! What is this for a man full of Sattva! In this situation he told his wife: “Girija Devi! The child has caught hold of you. It is very hungry. Give it milk profusely”. When the poor Brahmin noticed that Ekanath was not a bit moved and when he heard these sympathetic words, his heart melted. He broke down into tears. He repented that he had done a heinous crime. He prostrated before Ekanath and said, “Maharaj, forgive me. I have done a foolish act. I am a poor man. I have no money for my maintenance. These villagers bribed me to do this act, to make you angry. As I am poor, I was naturally attracted by this offer of money. I have committed a capital sin. Pardon me”. Ekanath excused and forgave the poor, ignorant Brahmin. He pitied him and sympathized with him. He asked him to study the Bhagavata and to repeat the Mantra of Lord Krishna. He gave him a Tulsi Mala also.

The villagers had been certain that this time they would succeed in their plans. So, when they saw the poor Brahmin returning with a Tulsi Mala round his neck, they were quite disappointed. The Brahmin told them: “I did my best. I caught hold of his wife. This did not, in the least, affect him. He was smiling all the while. He is a god. Now I am his disciple. He has given me Mantra. From that moment, I have left all my mischievous acts. I am now trying my best to have Darshan of Lord Krishna. Hereafter, I will not join with you all”.

Ekanath had great love for the untouchables. He had equal vision. He saw Lord Krishna only in all creatures. Once, some Mahars, who were passing by the house of Ekanath, stopped in front of his house as they were attracted by the sweet smell of palatable dishes which were being prepared for the death anniversary of Ekanath’s father. Ekanath at once invited them and fed them sumptuously. He got food prepared again and invited the Brahmins. The Brahmins were offended. They said, “O Ekanath, you fed the Mahars first. We will not take food at your home”. Ekanath then invoked his forefathers directly through his power of devotion and fed them in person.

Ekanath was a great devotee. Lord Krishna Himself assumed the form of a poor Brahmin boy, and under the name of Kandia, lived as a water-carrier in the house of Ekanath for a period of twelve years rendering such service as bringing water for the Puja, making sandal-paste for worship, removing the leaves after dinner, etc. After this period, Kandia disappeared miraculously.

Ekanath wrote the Bhagavat, which holds the same place of respect in Maharashtra as Tulsidas’ Ramayan holds in Northern India. It is popularly known as Ekanath Bhagavatam and is found in every house in Maharashtra.

At the age of sixty-six, in the year 1599 A.D., Ekanath passed away. A staunch Bhakta, a great Bhagavata, an ideal householder and a great saint, he still shines as a model for all people.