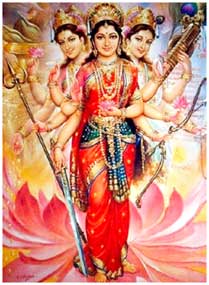 Introduction
Manifestations of Sakti
Siva And Sakti
Matter, Energy, And Spirit
The Divine Mother
Durga—Lakshmi—Saraswati
The Navaratri And Its Spiritual Significance
Worship of The Divine Mother
Related Links

DEVI or Maheswari or Parasakti is the Supreme Sakti or Power of the Supreme Being. When Vishnu and Mahadeva destroyed various Asuras, the power of Devi was behind them. Devi took Brahma, Vishnu, and Rudra and gave them necessary Sakti to proceed with the work of creation, preservation, and destruction.

Devi is the Creatrix of the universe. She is the Universal Mother. Durga, Kali, Bhagavati, Bhavani, Ambal, Ambika, Jagadamba, Kameswari, Ganga, Uma, Chandi, Chamundi, Lalita, Gauri, Kundalini, Tara, Rajeswari, Tripurasundari, etc., are all Her forms. She is worshipped, during the nine days of the Dusserah as Durga, Lakshmi, and Saraswati.

Devi is the Mother of all. The pious and the wicked, the rich and the poor, the saint and the sinner—all are Her children.

Devi or Sakti is the Mother of Nature. She is Nature Itself. The whole world is Her body. Mountains are Her bones. Rivers are Her veins. Ocean is Her bladder. Sun, moon are Her eyes. Wind is Her breath. Agni is Her mouth. She runs this world show

Sakti is symbolically female; but It is, in reality, neither male nor female. It is only a Force which manifests Itself in various forms.

She lies dormant in the Muladhara Chakra in the form of serpentine power or coiled-up energy known as the Kundalini Sakti. She is at the centre of the life of the universe. She is the primal force of life that underlies all existence. She vitalises the body through the Sushumna Nadi and nerves. She nourishes the body with chyle and blood. She vitalises the universe through Her energy. She is the energy in the sun, the fragrance in the flowers, the beauty in the landscape, the Gayatri or the Blessed Mother in the Vedas, colour in the rainbow, intelligence in the mind, potency in the homoeopathic pills, power in Makaradhvaja and gold oxide, will and Vichara Sakti in sages, devotion in Bhaktas, Samyama and Samadhi in Yogins. Vidya, Shanti, lust, anger, greed, egoism, pride are all Her forms. Her manifestations are countless.

The Supreme Lord is represented as Siva, and His power is represented as His wife—Sakti, Durga, or Kali. Mother Durga is the energy aspect of the Lord. Without Durga, Siva has no expression; and, without Siva, Durga has no existence. Siva is the soul of Durga. Durga is identical with Siva. Lord Siva is only the Silent Witness. He is motionless, absolutely changeless. He is not affected by the cosmic play. Durga does everything.

Siva is omnipotent, impersonal, inactive. He is pure consciousness. Sakti is dynamic. The power, or active aspect, of the immanent God is Sakti. Sakti is the embodiment of power.

Siva and Sakti are related as Prakasa and Vimarsa. Sakti or Vimarsa is the power that is latent in the pure consciousness. Vimarsa gives rise to the world of distinctions. In other words, Sakti is the very possibility of the Absolute’s appearing as many, of God’s causing this universe. God creates this world through Srishti-Sakti, preserves through Sthiti-Sakti, and destroys through Samhara-Sakti.

There is no difference between God and His Sakti, just as there is no difference between fire and its burning power. Sakti is inherent in God. Just as you cannot separate heat from fire, so also you cannot separate Sakti from God, the possessor of Sakti. Sakti is Brahman Itself. Siva and Sakti are one. Siva is always with Sakti. They are inseparable. Worship of Durga or Parvati or Kali is worship of Lord Siva.

Mother is the creative aspect of the Absolute. She is symbolised as Cosmic Energy. Energy is the physical ultimate of all forms of matter, and the sustaining force of the spirit. Energy and spirit are inseparable. They are essentially one.

Matter is reducible to energy. The Prasnopanishad says that Rayi and Prana—matter and energy—constitute the whole of creation. Matter is the outward index of the inward Power that its expressed by God. The Power that originates and sustains the universe is not the Jada Sakti or the electrical energy which is the ultimate reality of the scientists, but Chaitanya Sakti, the Power of the immutable Consciousness of Brahman. In fact, it is not a Power which is of Brahman, but a Power which is Brahman.

Sakti may be termed as that by which we live and have our being in this universe. In this world, all the wants of the child are provided by the mother. The child’s growth, development, and sustenance are looked after by the mother. Even so, all the necessaries of life and its activities in this world, and the energy needed for it, depend upon Sakti or the Universal Mother. The human mother is a manifestation of the Universal Mother. All women are forms of the Divine Mother.

You are more free with your mother than with anybody else. You open your heart more freely to your mother than to your father. There is no God greater than the mother. It is the mother who protects you, nourishes you, consoles you, cheers you, and nurses you. She is your first Guru. The first syllable which almost every quadruped, or human being, utters is the beloved name of the mother—Ma. She sacrifices her all for the sake of her children.

A child is more familiar with the mother than with the father, because the former is very kind, loving, tender, and affectionate, and looks after the wants of the child. Whenever the child wants anything, it runs with outstretched hands to the mother, rather than to the father. If she hears the cry of the child, she leaves her domestic work and runs immediately to attend to the child. In the spiritual field also, the aspirant or the devotee—the spiritual child—has more intimate relationship with Mother Durga than with the Father Siva. Lord Siva is quite indifferent to the external world. He is a Tyagi and a Virakta. He wears the garlands of skulls of His devotees, rubs the whole body with Vibhuti or holy ash, and remains in the crematorium in an intoxicated state. He is absorbed in contemplation of the Self. He remains in a state of Nirvikalpa Samadhi. He has handed over the power of attorney to His consort, Durga. It is Mother Durga only who looks after the affairs of the world. Lord Siva gazes at Durga, His Sakti. She engages Herself in creation, preservation, and destruction.

The Devi assumes many aspects according to the tasks to be performed by Her—sometimes, sweet and tender; and at others, terrible and devouring. But, She is always kind and gracious to Her devotees. Arjuna, the Pandava hero, worshipped the Goddess before starting the fight against the evil-minded Kauravas. Sri Rama worshipped Durga at the time of the fight with Ravana, to invoke Her aid in the war. He fought and won through Her grace.

The Navaratri And Its Spiritual Significance

There is a special significance in this arrangement. When the Devi is worshipped by a devotee in this order, as Durga, She first destroys the evil propensities that lurk in his mind. Then, as Lakshmi, She implants therein, the Daivi Sampat or the divine qualities conducive to spiritual unfoldment. Then, as Saraswati, She bestows true knowledge on him.

The tenth day commemorates the victory of knowledge over nescience, goodness over evil. It is the day on which boys are put in the school. Aspirants are initiated on this day. On this memorable Vijaya Dasami Day, the carpenter, the tailor, the mason, the artist, the songster, the typist, and all technical workers do Puja for their instruments and implements. This is Ayudha Puja. They behold and recognise the Sakti or power behind these instruments, and worship the Devi for their success, prosperity, and peace.

Worship of The Divine Mother

Worship of Devi or the Universal Mother gives not only prosperity, but liberation from all bondages. It leads to the attainment of Knowledge of the Self. The story of the Kena Upanishad, known as the Yaksha-Prasna, supports this view. Uma taught the Truth to the Devas.

Sakti is all. She can do anything. She can make or mar. She can mend or end. For the sake of the continuance of Her Divine Play here, She Herself, as Avidya-Maya, has veiled the Truth from you and bound you to this Samsara. When She is propitiated through the practice of sincere devotion and unconditional self-surrender, She, as Vidya-Maya, removes the veil and enables you to perceive the Truth.

No one can free himself from the thraldom of mind and matter without Mother’s grace. The fetters of Maya are too hard to break. If you worship Her as the great Mother, you can very easily go beyond Prakriti through Her benign grace and blessings. She will remove all obstacles in the path, and lead you safely into the illimitable domain of eternal bliss, and make you absolutely free.

May Parasakti or Devi—the Universal Mother Jagadamba—bless you all with wisdom, peace, and immortal bliss.

Related Links:
\ Durga Puja by Swami Sivananda.
\ God As Mother by Swami Chidananda.
\ The Esoteric Significance of The Devi Mahatmya by Swami Krishnananda.