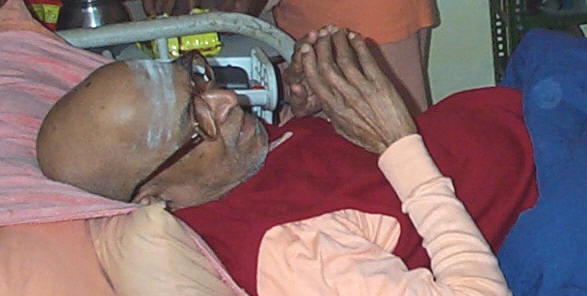 His Holiness Revered Sri Swami Brahmananda Maharaj, a very venerable senior monk of Sivananda Ashram, Rishikesh, attained Mahasamadhi on Thursday, 12th September 2002 at 1:55 p.m. after undergoing a sudden heart attack earlier in the day at about 2:30 a.m. Swamijis passage was wonderfully peaceful. He was fully aware, and surrounded by devotees amidst the continuous, gentle chanting of OM. The Gangarpana (Holy offering of the body to Mother Ganga) was performed at about 4:30 p.m. on the same day with due ceremonies, full procession and Vedic chanting.

For over twenty-five years, Revered Sri Swami Brahmanandaji Maharaj was a teacher of Vedanta at the Yoga Vedanta Forest Academy of Sivananda Ashram. Swamiji also presented several classes each day to Ashram Sannyasins and Brahmacharis and the many guests and visitors who frequented Sivananda Ashram. These formal classes continued until his retirement in 1995 due to poor health. Even afterwards he continued to teach small groups of devotees and to clarify their doubts until his passing.

Revered Sri Swami Brahmanandas wisdom teachings were always offered with tremendous patience and love. He radiated a peace so palpable that it touched a wellspring of joy in the hearts of all who came in contact with him. Swamijis spiritual insights were filled with a depth of understanding that was not from the intellect but from the very source of Truth itself.

Revered Sri Swami Brahmanandajis holy memory and sacred teachings live on in the hearts of his many devotees throughout the world.

The sacred Shodasi Puja (16th day ceremony) will be performed on Friday, 27th September, 2002, with the following program:

All are cordially invited to take part in the ceremonies and receive the blessings of God and Gurudev.