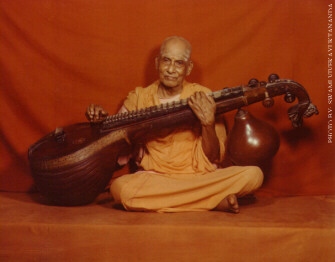 His Holiness Revered Swami Vidyanandaji Maharaj attained Mahasamadhi at 9.05 a.m. on Friday, the 7th April 2000. The departing was really wonderful. It fulfilled all the scriptural description of an illumined soul going into liberation. There is no doubt whatsoever that he has merged and become one with the Supreme Universal Being. He was an embodiment of renunciation and deepest devotion in the Lord. His spiritual personality was indeed a living ideal of all the lofty qualities of the Sadhana Marga like keenest Viveka and Vairagya (discrimination and dispassion), intense thirst for God and God alone and great wisdom. In him one actually saw a rare combination of highest Jnana and deepest bhakti.

Born in pious and religious family in Kerala in the year 1914, he was known as Ramanathan, the second son of a big family consisting of 2 sons and five daughters. The influence of the mother over the boy was very profound in creating spiritual Samskaras (impressions) in him. At the age of eight, his mother took both her sons on a long pilgrimage for three years, all over India, during which period the young boy had the opportunity of receiving the blessings of many Siddha-purushas and holy saints. After a brief business career, he went to Chidambaram, in Tamilnadu where he came in contact with his music guru Sri P. Srinivasa Iyer, who was himself a Naishthika Bramhachari (lifelong celibate) and a saintly soul. He taught him Veena for 12 days after which he asked him to practice on his own. But, the Guru's power and grace was such that soon he not only mastered the subtle art but also could connect music with Vedantic thoughts. In order to help his student support his large family, Srinivasa Iyer put him in the music department of the cinema field, in which Sri Ramanathan worked for nearly 25 years, in Bombay and Madras. This was more a period of Sadhana for him than earning money. In 1950, he became a member of the Divine Life Society and in 1954 he came to Rishikesh along with his music Guru for Swami Sivanandaji's darshan. Swami Sivanandaji asked him to stay here permanently and said that he had been praying to Goddess Saraswati to send a person who could play on the Veena. However, he had to go back to Madras to complete his contracts and other pending works and joined the Sivananda Ashram in 1956. On the holy Guru Purnima of the same year, Swami Sivanandaji gave him Sannyasa and named him Swami Vidyananda Saraswati.

Swami Vidyananda continued teaching music, Bhajans and Kirtans on the Veena to many students, as an integral part of his Sadhana. He used to hold an early morning Bhajan class and afternoon study-class in his own room, everyday in which interested Ashramites and visitors joined with great enthusiasm and derived the much needed peace and solace. His feelingful Bhajans and mastery in Veena had endeared him to countless visitors, who made an annual visit to the ashram, primarily to recharge themselves with the divine vibrations in his musical Bhajan class. His Bhajans were a treat to the souls. Many are the foreign students who were enchanted by his soulful songs that wished to take him to their countries. But, Swamiji was very happy and contented with his simple life of Bhajan, Kirtan and study in his tiny room, on the banks of Ganges, in the holy Ashram of Sri Gurudev, keeping himself in continuous remembrance of the Lord. It was not unusual to see him go into a trance while singing Bhajans and Kirtans.

We saw how the physical ailments, a blessing in disguise, as Pujya Swamiji used to call them, were present for the last few years in one form or another as companions in his inner journey. Few minutes before departing from the mortal body, Swamiji was talking peacefully. He said "Keep His Name always". On asking how to keep, Swamiji further said, "Keep Him bound in the mind and sing Jai Jai Jai to Him". Then uttering Om Ram, Om Ram, Om Ram, Om Ram four times, Swamiji breathed his last.

There is no doubt whatsoever that he has merged and become one with the Supreme Universal Being.