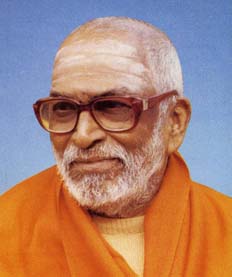 Swamiji’s pre-monastic name was Sri K. Nilakantha Iyer. He was born at Thonnakkal village of Tiruvanantapuram district, Kerala, to the pious Brahmin parents Sri Krishna Iyer and Srimati Rukmini Ammal on 26th June 1910. He was the eldest of five children. He studied at Tiruvanantapuram. After graduating from Travancore University (now Kerala University), he joined the service of the erstwhile princely state of Travancore. He was married and had a son. His wife passed away in 1944. His parents pressed him to marry again, but he declined.

Sometime in 1946, he bought the book ‘Practice of Yoga - Vol I’ of Gurudev Swami Sivananda at Tiruvanantapuram railway station.

Inspired by the book he came to Rishikesh the same year to have Darshan of Gurudev and had Mantra Diksha from him. Thereafter he regularly came to the Ashram once every year except 1950. In 1947 Swamiji thought of giving up home. But Gurudev advised him to continue on the job till he had full eligibility for pension. He organised the Divine Life Society branch at Tiruvanantapuram. It was functioning in his house. In 1950 he also organised Gurudev’s All India and Ceylon Tour in Tiruvanantapuram circle. His father was a member of the Tour Organising Committee. Gurudev went to their house and performed Arati in the Puja-room.

Around 1951 he made a trip to Kedar etc. with his son. At Kedar, something pricked and wounded his son’s left heel. The wound became septic. Despite treatment it got worse. The heel turned black and caused excruciating pain. Amputation at a Dehradun hospital was planned. But the next day, the Ashram doctor noticed miraculous improvement and said that amputation would not be necessary. What had happened meanwhile? Nilakantha Iyer asked his son. The boy said that Gurudev came to him the previous day, ordered opening of the bandage, looked at the wound and recited Mahamrityunjaya Mantra for a while.

Nilakantha Iyer took voluntary retirement on 1st October 1957, and retired as a Class I officer, Superintendent of the Kerala Government Press, Tiruvanantapuram. He shifted to Rishikesh in 1958.

But he was the only surviving son of his aged parents. And he had the only son who was young. He had his responsibilities towards them. So he divided his time between Rishikesh and Tiruvanantapuram. He used to spend eight or nine months at Rishikesh and three or four months at Tiruvanantapuram. During the early years of his life at Rishikesh, he lived at Ram Nagar and then shifted to Muni-ki-reti. Along with some fellow-disciples he lived in a thatched but in the Ramashram premises. He also stayed for a while at Hanuman Mandir near the Ashram.

Once Sringeri Sankaracharya H.H. Sri Abhinava Vidyateertha came to Tiruvanantapuram. A group of devotees including Nilakantha Iyer went for his Darshan. The Acharya advised them to worship Lord Subramanya. During the subsequent discussion on this advice by the group, Nilakantha Iyer suggested building a temple of the Lord. He was entrusted the responsibility as convenor of the construction committee. The temple was constructed in accordance with the Pancharatra Agama and the Kumbhabhisheka was done in June 1964.

Swami Sivanandaji Maharaj had given him ochre cloth and Sannyasa Mantras. He even gave the monastic name Swami Brahmananda Saraswati. But Viraja Homa had not been done. Gurudev shed his mortal coil in July 1963. Nilakantha Iyer was at Tiruvanantapuram then. In August 1963, his father also passed away. The temple construction had been completed. Now he decided to stay permanently at Rishikesh. His death some years hence was predicted according to the horoscope. He was anxious to become a full-fledged Sannyasi before this happened. At his request H.H. Sri Swami Krishnanandaji Maharaj initiated him into Sannyasa in July 1968 on Guru Purnima day with Viraja Homa, etc. After Sannyasa he started living in the Ashram premises.

For many years Swamiji was conducting a study group in the Ashram. The group met daily and went through the scriptures. The members knew Tamil, Malayalam, English and some Sanskrit and Hindi. They used to read different commentaries in all these languages. The pace was quite unhurried and the grasp was thorough. They took one-and-a-half years to study the first six chapters of the Bhagavadgita. Swamiji also attended the early morning prayer of Swami Vidyanandaji Maharaj for ten years. The prayer session would start at 3.30 a.m. daily. Swamiji scrupulously observed purity, dispassion and aspiration—the marks of the Sannyasa Ashrama. He used to instruct his students later: ‘If one lives a pure life according to his station in life, liberation will be waiting for him at the end.’ On 18th July 2002, Swamiji had been to Dehra Dun for seeing H.H. Sri Swami Chidanandaji Maharaj, the Revered President of the Ashram. The latter told an attendant of Swamiji: "I have had darshan of a Jnani on Guruvar (the day of the Guru, i.e., Thursday)".

Swamiji was a great scholar of Vedanta. He taught Vedanta at the Yoga-Vedanta Forest Academy of the Ashram for many years. Also he used to hold two or three classes a day in or near his room for the residents and visitors. In addition to Vedanta, Swamiji taught Itihasa, Purana etc., but with the touch of Vedanta. Many times Swamiji would hold classes even going against the medical advice to rest. Thus Swamiji taught till December 1995, when he was running 86. He loved questions and encouraged students to clear their doubts. Over the decades, hundreds of students have benefited from his classes. Yoga Vasishtha was a favourite text of Swamiji. Once Swamiji taught it continuously four times—for six years. With absolute conviction and unending patience he would urge his listeners to reflect over their own daily experience of deep sleep, dream and waking. He has written five books which are of a very high order.

Swamiji was a living embodiment of what he taught. His very being and life expressed perfect humility and simplicity, deep inner strength and peace, innocence and keen alertness. He was gentle, soft-spoken and kind. One could never hear even his footsteps. He observed moderation in all matters, especially in food habits. He maintained serenity always and was ever at peace with everything. He had total detachment. His concern for the devotees and his compassion are unforgettable.

On 12th September 2002, Swamiji suffered a massive heart attack. (This was the second. He had the first attack in 1984). At 1:55 p.m. he attained Mahasamadhi amidst continuous chanting of Om, in absolute peace.

Once H.H. Sri Swami Krishnanandaji Maharaj remarked: "Gurudev’s mission has been fulfilled. His Ashram has produced one Brahmananda Swamiji."