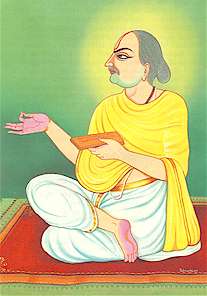 Vallabhacharya, the founder of the Vaishnavite cult of Rajasthan and Gujarat, was born of Lakshmana Bhatta and Illamma in 1479 A.D. at Champaranya, Raipur, in Madhya Pradesh. He was a Telugu Brahmin and a contemporary of Sri Chaitanya Mahaprabhu. He is regarded as an Avatara of Agni.

Vallabha lost his father when he was eleven years of age. He completed, in his twelfth year, his study of the Vedas, the six Darshanas and the eighteen Puranas at Varanasi. From Varanasi he went to Brindavan. Then he visited all the sacred places in India.

Vallabha attended the court of Raja Krishna Deva at Vijayanagar and defeated all the famous Pundits of the court. The Raja was very much pleased with Vallabha for his genius and learning, showered on him gifts of gold and other wealth, and invested him with the title of ‘Vaishnavacharya’. Vallabha’s fame and influence quickly increased. From Vijayanagar Vallabha went to Ujjain and other places.

Vallabha was married at Varanasi and his wife’s name was Mahalakshmi. He had two sons.

The important works of Vallabha are Vyasa Sutra Bhashya, Jaimini Sutra Bhasya, Bhagavata Tika Subodhini, Pushti Pravala Maryada and Siddhanta Rahasya. All these books are in Sanskrit. Vallabha has written many books in Brij Bhasha also.

Vallabha’s followers have built a temple on the spot of his birth at Champaranya. This temple is very popular and is much visited by them as a place of pilgrimage.

Vallabha spent his last days at Varanasi. He thought that his life’s mission had been accomplished. He went one day to bathe in the Ganges at Hanuman Ghat. There the people saw a brilliant light ascending the sky from the earth. In the presence of a host of spectators he ascended the sky and disappeared. This took place in 1531 A.D. in Vallabha’s fifty-second year.

Vallabhacharya was the exponent of pure Monism or the Shuddhadvaita school of philosophy. Sri Krishna is the highest Brahman. His body consists of Satchidananda. He is called Purushottama. Vallabha’s followers worship Bala Krishna (Vatsalya Bhava). Vallabha laid great stress on Pushti (grace) and Bhakti (devotion). Maha Pushti is the highest grace or Anugraha which helps the aspirant to attain Godhead. Things come out of the Akshara (Satchidananda) like sparks from fire. These are his salient teachings.