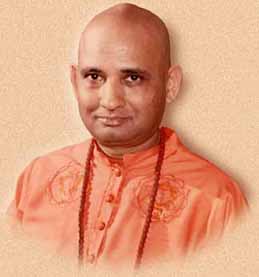 Swami Jyotirmayananda was born on the 3rd of February, 1931 in a pious family in the state of Bihar. From his very childhood days he showed signs of his future greatness. He was calm and reflective, brilliant in his studies, as also loved by his friends and relatives.

While he was studying in the Science College of Patna, when he was 18 years of age, he had read Swami Sivananda’s book "Mind, Its Mysteries and Control." This had captured him and When Swami Sivananda visited Patna during his All-India tour in September, 1950, he had Swamiji’s first Darshan at Patna. Then on his mind was drawn towards his Master more and more. Finally in 1952 he came to Rishikesh on a short visit, but stayed on permanently.

Gurudev found that he is a good speaker and entrusted him with the work of conducting classes. He also held regular discourses, very frequently, during the evening Satsangas in the Ashram in the very presence of Sri Gurudev. After being granted Sannyasa by Sri Gurudev on the 3rd of February, 1954, he took to literary side of work more intensely and became the editor of the Hindi journal of the Society known as ‘Yoga-Vedanta’. This work he did exquisitely, in addition to conducting daily classes on scriptures such as the Yoga-Vasishtha in the Ashram’s Bhajan Hall, which many visitors attended with great love and concentration and interest. His exemplary life, great command of spiritual knowledge, love towards all beings, and his very impressive and dynamic exposition of Yoga and Vedanta Philosophy attracted enormous interest all over India, and in different countries of the world. He frequently lectured by invitation at All India Vedanta Conferences in Delhi, Amritsar, Ludhiana and other parts of India. Thus he continued the work of editing the ‘Yoga-Vedanta’ journal and conducting the scriptural classes until 1962, when on an invitation from a well-wisher of him he travelled to the West. Crossing Europe, he stayed for several years in Puerto Rico and in 1969 he shifted his centre to Miami in the United States where he has established a Publishing Centre and a systematically working Yoga Research Foundation, he himself being a very good writer and speaker.